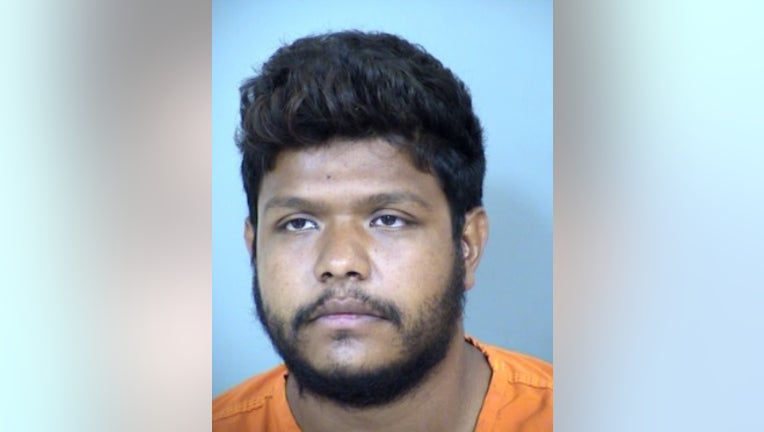 GOODYEAR, Ariz. - Court documents say a Glendale man was arrested on Sept. 13, following a series of shocking incident in Goodyear.

According to investigators, the string of bizarre incident started when 26-year-old Juan Luis Loya-Leyva was walking through the parking lot of Abrazo West Valley Hospital when he approached a car, and tried to open the rear passenger door of that car.

"The victim closed the door from the interior. However, [Loya-Leyva] then shattered the rear hatch glass window by punching through it, breaching the threshold and entering the vehicle," a portion of the court documents read.

Investigators say Loya-Leyva then charged at the person inside the car.

"[Loya-Leyva] grabbed ahold of [the victim's] leg, and tried to pull her out of the vehicle," read a portion of the court documents. Investigators also accuse Loya-Leyva of threatening to kill the person.

Suspect ran around area and nearby businesses

After the incident, investigators say Loya-Leyva ran around the area, leaving a trail of blood as he was injured in the right bicep area following the first incident. Loya-Leyva, according to court documents, also tried to enter a number of cars by trying to open their door handles.

Officials say Loya-Leyva then ran around a medical imaging center in the area and smeared blood over doors and windows he passed, while apparently trying to gain entry.

Loya-Leyva, investigators say, was then seen on surveillance video wiping blood on the door handles of a restaurant in the area, before he got into a Starbucks.

According to court documents, prior to Loya-Leyva entering the Starbucks, he was seen on surveillance video flicking blood onto a person while claiming he has HIV. Loya-Leyva, investigators say, also smeared blood onto that victim's car.

Once inside the Starbucks, officials say Loya-Leyva began to flick blood on the merchandise inside, as well as the counter.

"[Loya-Leyva] then intentionally flicked blood into the face and on the bodies of two Starbucks employees. [Loya-Leyva] continued to claim he had HIV," read a portion of the court sdocuments.

One of the Starbucks workers, according to court documents, was 36 weeks pregnant. The Starbucks location had to shut down as a result.

According to investigators, once Loya-Leyva left the Starbucks, he was detained by officers.

"During detention, [Loya-Leyva] intentionally rubbed blood on an officer, and flicked blood towards another officer, which caused him to jump away," read a portion of the court documents. "During this, [Loya-Leyva] was telling officers he had HIV and/or AIDS, and he wished for them to get it."

Eventually, investigators say Loya-Leyva was taken to a hospital, where he allegedly threatened to kill nurses and doctors, and used a highly offensive racial slur against a Black doctor.

Police officials are accusing Loya-Leyva of causing at least $25,000 in damages.

Court documents state that Loya-Leyva is accused of a number of offenses, including aggravated assault, criminal damage, kidnapping, threat, and disorderly conduct. A $10,000 secured appearance bond has been set for Loya-Leyva, and a preliminary hearing has been scheduled for Sept. 23.