Just two hours after the last shot was fired, the woman who investigators say killed two people and injured a third at two separate Midtown locations was arrested trying to board a flight.

The shootings essentially locked down the Midtown neighborhood in the heart of Atlanta for a couple of hours.

The name of the woman arrested or how she is connected to the victims have not yet been released.

Westley Freeman, 41, of Atlanta, and Michael Shinners, 60, of Alpharetta, were both killed in the shooting, the Fulton County Medical Examiner's Office says.

Around 1:46 p.m., Atlanta 911 received a call reporting a shooting at 1280 W. Peachtree Street, at the corner of 16th Street. Officers arrived at the 40-story 1280 West condo building to find two people shot. Police say one person was dead and another was rushed to an area hospital.

Around 2 p.m., a second 911 call was placed, again reporting a shooting. This time it was at 1100 Peachtree Street. Officers arrived at the Eleven Hundred Peachtree executive office building to find one person injured by apparent gunfire. The victim was also rushed to an area hospital.

"The lookout for both of the shooters, we found out quickly, was the same person. It was a female that was matching the same description that was seen in this area," said Interim Atlanta Police Chief Darin Schierbaum. "That triggered an immediate response from this department as it was indicative of a possible active shooter situation."

Law enforcement officers from multiple federal, state, and local agencies descended into the heart of Midtown and an alert was put out asking people to avoid the area as well as residents and workers to shelter in place.

A nearly 100-acre section of Midtown was flooded with officers all searching for the suspect. As officers were arriving at the scene, technicians at Atlanta police headquarters were already on the job.

"We were able to utilize our camera network, which is vast and that was able to quickly help us quickly track down the suspect," said Dickens.

Atlanta Mayor Andre Dickens and Interim Police Chief Darin Schierbaum give details about the arrest of a woman at Hartsfield-Jackson Atlanta International Airport in connection to a triple shooting in Midtown.

Police quickly received tips from citizens who told them the suspect had entered the Colony Square campus.

"Now, we receiving various tips that gave a possible scenarios that may have been unfolding that the shooter could still be in the area or the shooter could have left the area, and that’s why you saw a city-wide search transpiring," Chief Schierbaum said.

The search eventually led police to Hartsfield-Jackson Atlanta International Airport, but investigators have not released what mode of transportation the woman used.

"We deployed resources there, both city resources as well as our federal partners. And a short time later, at around 4 o’clock this afternoon, we were able to take into custody the individual we believe shot individuals at both West Peachtree as well as Peachtree Street," said Chief Schierbaum. 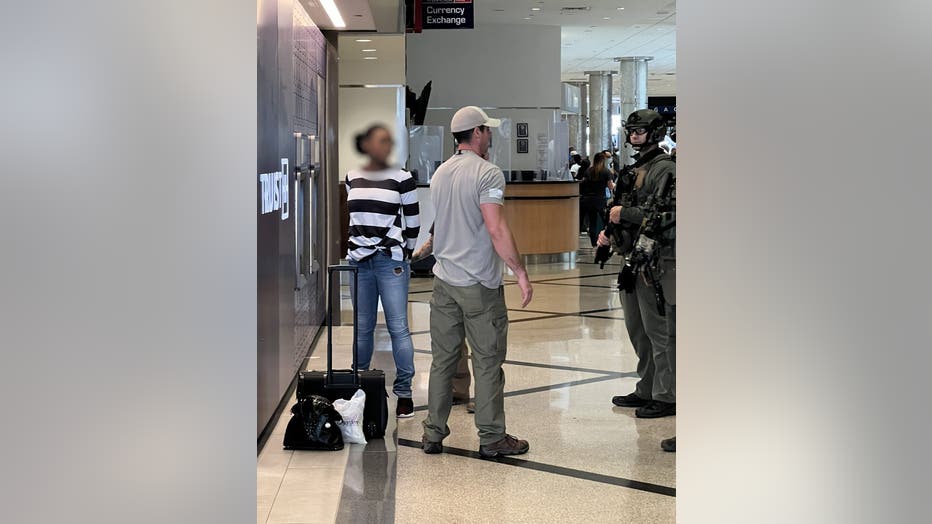 A photo shared with FOX 5 shows the woman, dressed in a very distinct black and white striped shirt and blue jeans, standing handcuffed in front of the Truist Bank ATMs in the South Terminal. That photo was taken just after 4 p.m., about two hours after the last shot was fired. The woman had the same outfit and rolling suitcase as the woman seen in earlier suspect images released by police.

"The suspect was apprehended prior to being in any controlled areas of the airport," said Dickens.

Police say officers took a handgun into possession at the airport which investigators believe was used in both shootings.

The woman who police say shot three people at two separate locations in Midtown, killing two, was arrested at Hartsfield-Jackson Atlanta International Airport less than two hours after the last shot was fired.

Police said a second victim later died at the hospital.

Video taken by FOX 5 shows the woman being placed into the back of an Atlanta police cruiser. Her name and charges have not been released.