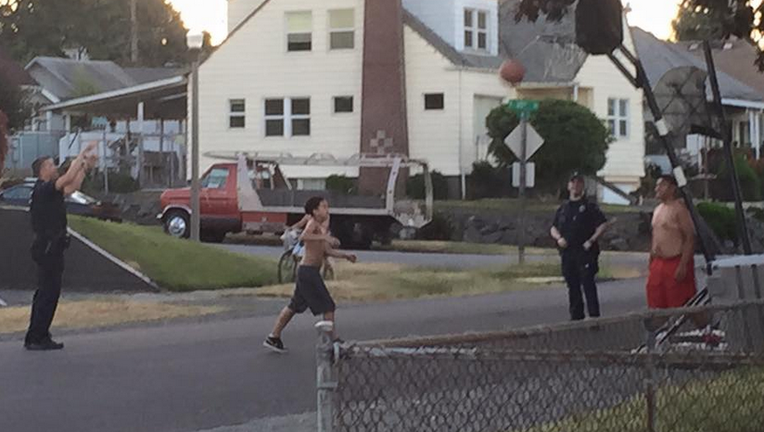 TACOMA, Washington -- A picture snapped of two Washington state police officers has been shared thousands of times on Facebook this week.

But this photo doesn't show the officers doing something wrong, in fact the woman behind the photo told Q13 FOX News it highlights something very right about police in her hometown of Tacoma.

Tara Scheidt posted the photo of the officers to to her Facebook page Monday night. The picture shows in-uniform police playing basketball with two young males in a neighborhood just south of the Tacoma Dome.

"Yep, this just happened on my street tonight! There was a domestic violence call in the area and afterward these officers played a little basketball with the kids in the neighborhood. This is why I love Tacoma and this is why we are worlds apart from other police departments. Tacoma Police get the concept of community policing. It actually happens in neighborhoods like yours and mine."

Scheidt tagged Tacoma Mayor Marilyn Strickland, city council members and others. The post was quickly shared more than 50 times. Scheidt said it was amazing to see police play basketball with the kids, who were worried and nervous from the earlier disturbance in the neighborhood.

"They broke down that wall," Scheidt told Q13 FOX News. "All the kids were asking if they would come back and ride bikes."

Other residents chimed in on the comments section, saying the photo was just another example of one of the Pacific Northwest's most community oriented police forces in action.

Some shared similar experiences they've had with Tacoma police.

"I remember walking past TPD officers working with a family last year and I actually got choked up and cried by how fabulous (it was)," Jessica Corey-Butler said. "(An) officer was talking with kid who probably was involved in bad things. The guy was engaging the kid, listening to the kid...just being a cool human for the kid to talk to."

Tacoma Police Spokesperson Loretta Cool said playing basketball with kids is just one of many ways officers interact with the community, even though it's not always featured in front page news stories.

"One of the things that we have been trying to do for years is when you see these opportunities to connect with kids, you sit down and do it," Cool said. "Take the time to ask how their day is. It makes an impression. It only takes a few seconds to impact a child's life."

While animosity against police officers seems to have increased nationally following high-profile incidents, Cool said, people in Tacoma will often stop Cool on the street to say the TPD is doing a great job.

"Nationally we are very aware of some of the sentiment toward officers," Cool said. "But in Tacoma, we've had overwhelming support that we're doing the right thing."

"Tacoma is a pretty cool place," Scheidt said. "Sometimes it gets a bad rap, but it's actually pretty cool."