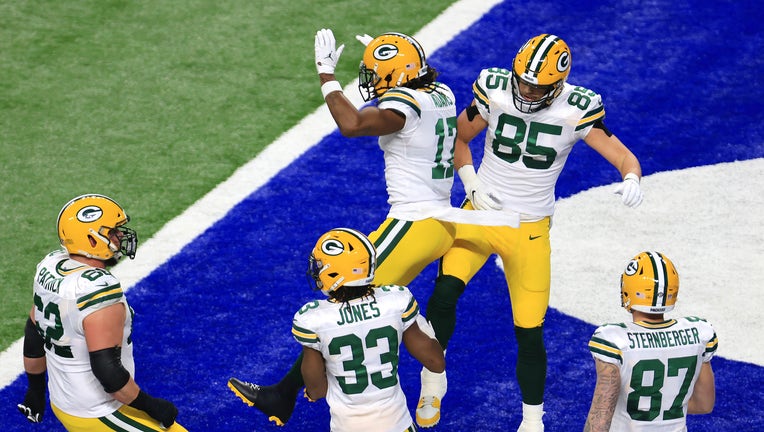 INDIANAPOLIS, INDIANA - NOVEMBER 22: Davante Adams #17 of the Green Bay Packers celebrates with Robert Tonyan #85 after Tonyan scored a touchdown during the first quarter against the Indianapolis Colts in the game at Lucas Oil Stadium on November 22,

MILWAUKEE - The Green Bay Packers have been getting it done this season.

Yes, there have been a few bumps in the road, but with seven wins so far this NFL season and one of the league's best offenses, the Packers have a lot to celebrate.

Tight end Robert Tonyan played college football at Indiana State. So when he scored a touchdown against the Indianapolis Colts on Sunday, Nov. 22, he was pretty fired up.

"Matt (LaFleur) was just coming up to the sideline trying to give a regular high five after a score and I'm like, he's not feeling this energy right now. He's not feeling what's really happening," Tonyan said. "So I just shoved him and he went for a shove back and then I just kept shoving him. It was a good vibe though."

Pushing and shoving, in a good way, is very much part of what the Packers do. They are into the collective celebrations.

"It takes all 11, and if you score and here comes Corey Linsley and Elgton (Jenkins) and D-Bak (David Bakhtiari) and (former Packers tackle) Bryan Bulaga, you know, trying to get Bryan to come celebrate when he was with us last year, you know, it's just a good reminder that, hey, it's not just about you, it's about all the guys. So let's celebrate together," said Aaron Rodgers.

LaFleur is 8-1 against the NFC North division since becoming head coach last season, so he's had a lot to celebrate in his Packers coaching career.

He'll try to add to that on Sunday night when the Packers host the Chicago Bears.

It is a historic rivalry that former Packers wide receiver knows all too well. He joined FOX6's Tim Van Vooren for a look ahead at Sunday's showdown.