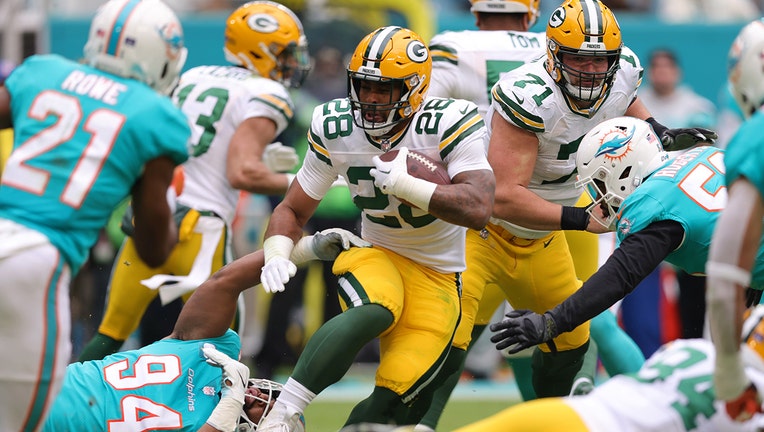 AJ Dillon carries the ball against the Miami Dolphins on Dec. 25. (Photo by Megan Briggs/Getty Images)

MILWAUKEE - The Green Bay Packers have turned their fortunes around, and, this past week, they received the best Christmas gift possible after beating the Dolphins 26-20 to keep their playoff hopes alive.

On the FOX6 Sports Blitz, FOX6's Lily Zhao went one-on-one with Packers running back AJ Dillon to talk about the eventful turnaround that now has the Green and Gold in a prime position.

Zhao: "AJ, the Green Bay Packers control their own destiny to the playoffs, and your final two games are at home. How does that sound?"

Dillon: "It feels awesome. I mean, it's kind of movie-like, in a sense. Everything that we wanted to have happen happened, and the stars aligned, and I think we have a lot of momentum coming off a few wins. We gotta stay with it and, like you said, we control our own destiny, so it's looking good."

Zhao: "What has this last month been like, knowing you were once 4-8, and now you're 7-8 with everything in front of you?"

Dillon: "I really think we all learned a lot about ourselves and kind of decided what kind of team we were going to be, and I think our backs have been against the wall. It's been playoff football for us really. We couldn't lose any more games. We need to win each one, and we need to continue to do that, and I think when we needed to make plays – we have. We can look at all these games, and the last three, guys have stepped up in different roles on different sides of the ball. It's just one of those situations where it's not always necessarily pretty or a blowout or anything like that, but we're finding ways to win as a team."

Zhao: "The Vikings are coming up next in a game with a lot on the line. What will be different for you guys this time around after losing big to Minnesota back in Week 1?"

Dillon: "I think we're a lot different team than we were in Week 1. I think we're starting to play complimentary football. I think guys on offense, there have been guys who have stepped up since then with guys on defense. I think we have a completely revitalized special teams unit, not necessarily different players, but I think you know what Coach Rich (Bisaccia) and the guys who are the core special teams guys in our units have really, you know, kind of come to fruition, and you're seeing big plays not only in the return game, but also in the kickoff game and all that stuff, so it's really cool to see, just the team playing together and playing with that passion for one another."

Zhao: "Matt LaFleur wants Packers fans to be as loud as humanly possible on Sunday. How big is it to have these last two divisional games at Lambeau Field?"

Dillon: "It's as big as it can be. It's everything, like you said, everything we want. Two teams that we know that we've played against, guys who've been around. The longer they've been around on the Packers, the more times they've played against both of these teams, and you know, they're also both dome teams. We're playing at home, we got the best fans in football. Everything is right there for us for the taking."