ARLINGTON, Va. — President Donald Trump paid a Memorial Day tribute at Arlington National Cemetery to those who have fallen in battle or while protecting a nation forever thankful for their selfless service. His solemnity contrasted with a self-promotional tweet earlier Monday in which he said fallen soldiers would be "very proud and happy at how well our country is doing today," citing the economy and low unemployment.

The commander in chief, speaking before an audience of Cabinet members, military leaders, veterans and families assembled in the marble amphitheater near the Tomb of the Unknown Soldier, said, "We mourn alongside their families and we strive to be worthy of their sacrifice."

President Trump said he came to the "sacred soil" of Arlington "to honor the lives and deeds of America's greatest heroes" — the men and women who laid down their lives so that others could be free. 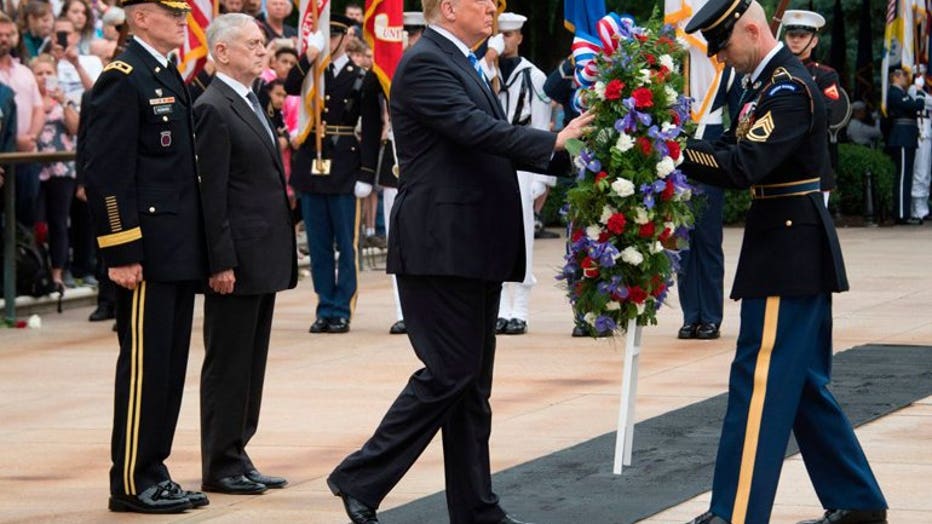 US President Donald Trump, with Defense Secretary Jim Mattis (2nd L), marks Memorial Day by laying a wreath at the Tomb of the Unknown Soldier at Arlington National Cemetery in Arlington, Virginia, on May 28, 2018 (Photo by JIM WATSON / AFP)

President Trump also laid a wreath at the tomb during his second Memorial Day trip to Arlington as president. 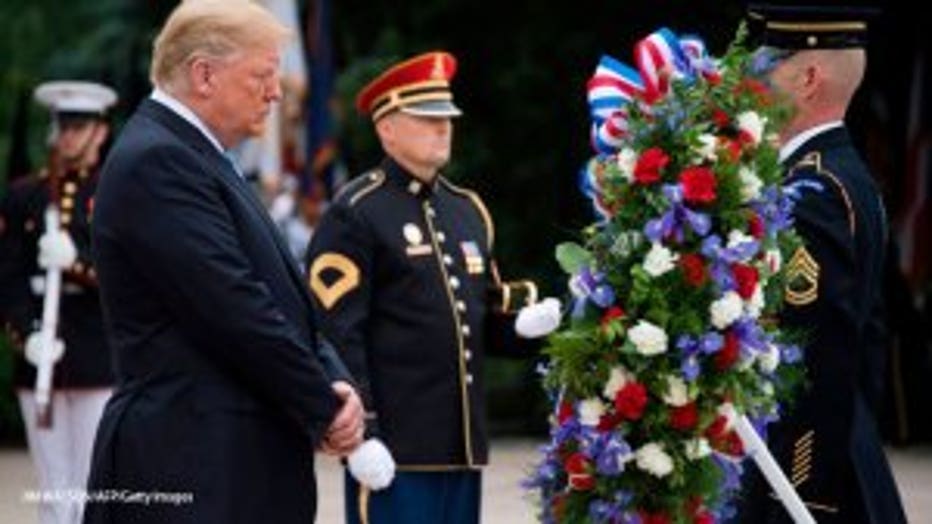 US President Donald Trump marks Memorial Day by laying a wreath at the Tomb of the Unknown Soldier at Arlington National Cemetery in Arlington, Virginia, on May 28, 2018 (Photo by JIM WATSON / AFP)

Before heading to the hallowed grounds across the Potomac River from the nation's capital, President Trump tweeted that "those who died for our great country would be very happy and proud at how well our country is doing today."

But the president then veered from the somber to the self-congratulatory in the tweet, citing what he said was the "Best economy in decades, lowest unemployment numbers for Blacks and Hispanics EVER (& women in 18years), rebuilding our Military and so much more. Nice!" The president also posted retweets in line with his criticism of the Justice Department and investigations into ties between his winning campaign and Russia.

He was criticized for his tone by a number of people, including a former chairman of the Joint Chiefs of Staff during the Obama administration, retired Army Gen. Martin Dempsey, who wrote, "This day, of all days of the year, should not be about any one of us."

Memorial Day messages from first lady Melania Trump and Ivanka Trump, the president's daughter, struck to a theme of remembrance and thanks. 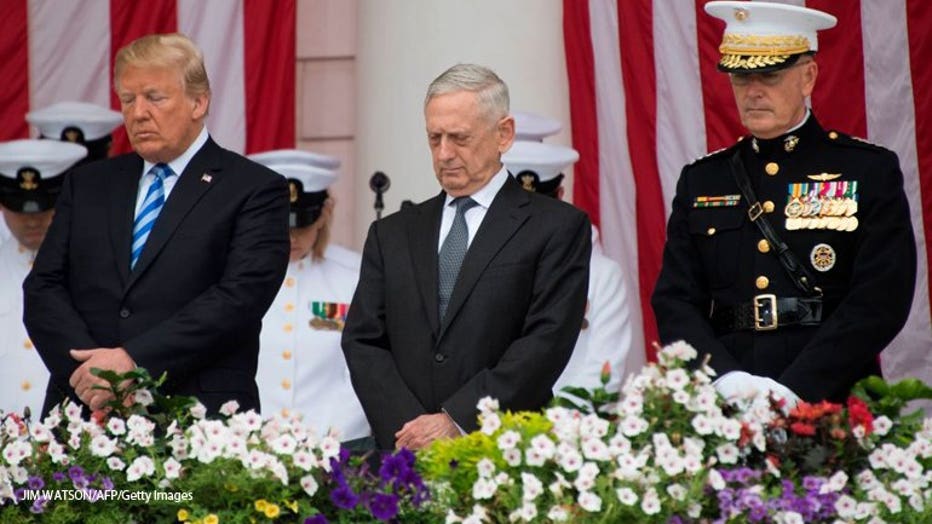 (L-R) US President Donald Trump, US Secretary of Defense Jim Mattis and Chairman of the Joint Chiefs of Staff General Joseph Dunford attend a Memorial Day ceremony at Arlington National Cemetery in Arlington, Virginia, on May 28, 2018. (Photo by JIM

"As we remember our fallen servicemen and women, our hearts are filled with gratitude for their sacrifice and awe of their courage," Ivanka Trump tweeted.

And Melania Trump thanked service members and their families for helping safeguard the country. "We honor the many Americans who laid down their lives for our great country. As one nation under God, we come together to remember that freedom isn't free," she tweeted.

At Arlington, President Trump said the heroes who died for America "rest in these hallowed fields, in cemeteries, battlefields and burial grounds near and far, and are drawn from the full tapestry of American life."

He said they came from "every generation, from towering cities and wind-swept prairies, from privilege and from poverty. They were generals and privates, captains and corporals of every race, color and of every creed, but they were all brothers and sisters in arms. And they were all united then, as they are united now, forever, by their undying love of our great country."

Gen. Joseph Dunford, the current chairman of the Joint Chiefs of Staff, honored the more than a million Americans he said "gave their last full measure so we could live in freedom and raise our children in peace."

He also honored the families "they left behind and for whom every day is Memorial Day."

Those who fought and died for America, he said, "shared a commitment to something greater than themselves and they were people who understand what we have in this country is worth fighting for."

Those who attended the Memorial Day tribute included President Trump's chief of staff, John Kelly, whose son, Marine 2nd Lt. Robert M. Kelly, was killed in November 2010 after he stepped on a land mine while on patrol in southern Afghanistan. He is buried at Arlington.