Another pressure wave from the Tonga volcano eruption is on the way and Meteorologist Bran MacMillan explains and breaks it down.

The government of Tonga has released its first official update since a massive volcanic eruption caused unprecedented damage and created tsunami waves that swept across the Pacific Ocean over the weekend.

The Hunga-Tonga-Hunga-Ha'apai volcano exploded on Saturday night, sending a plume of ash more than 60,000 feet into the stratosphere and triggering tsunami waves that reached the West Coast of the United States.

Government officials in Tonga said tsunami waves nearly 50 feet high rushed inland, destroying everything in their path on the western coasts of the Tongatapu Islands, 'Eua and Ha'apai Islands.

Communications, both international and domestic, had been severed since the eruption after the destruction of an underwater cable. 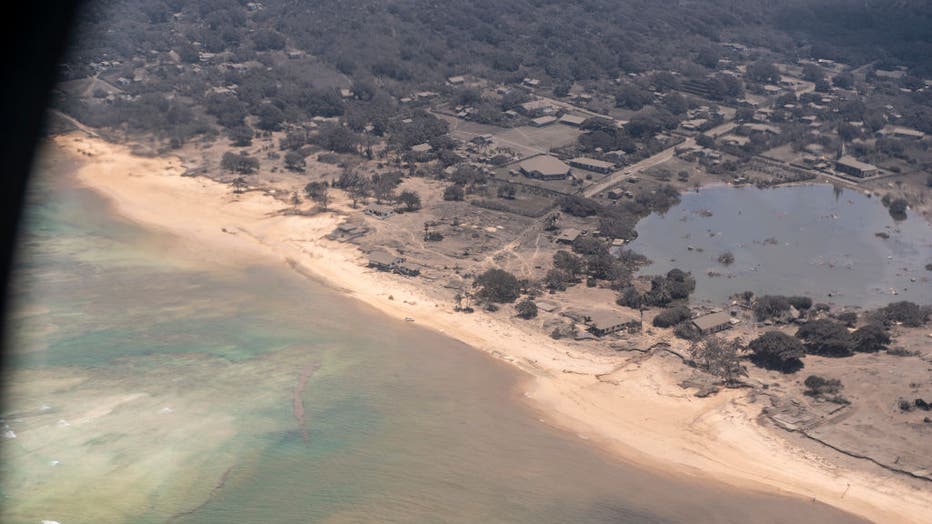 NOMUKA, TONGA - JANUARY 17: In this handout photo provided by the New Zealand Defense Force, an aerial view from a P-3K2 Orion surveillance flight of heavy ash fall on January 17, 2022 Nomuka, Tonga. A 5 Squadron crew work on board whilst flying over

No internet connection is available due to the destruction of an international fiber optic cable.

At least three people have been killed as a result of the eruption, according to government officials.

The Jan. 14, 2022, eruption of an underwater volcano near Tonga was captured on satellite. (FOX Weather)

"The search and rescue operation began immediately on Sunday morning to 'Atata island and' Ahau village," officials said in the statement. "Of the two reported missing, one has been found alive, and the other, a British national, was, unfortunately, the first fatality."

A 65-year-old woman from Mango Island and a 49-year-old man from Nomuka Island were also killed.

"There are also a number of injuries reported," officials said.

The eruption also seriously affected water supplies. Officials said efforts are underway to ensure the continuity of the supply of safe drinking water.

The Pacific Tsunami Warning Center issued tsunami advisories for the entire West Coast, including Alaska and Hawaii, following the eruption near Tonga. 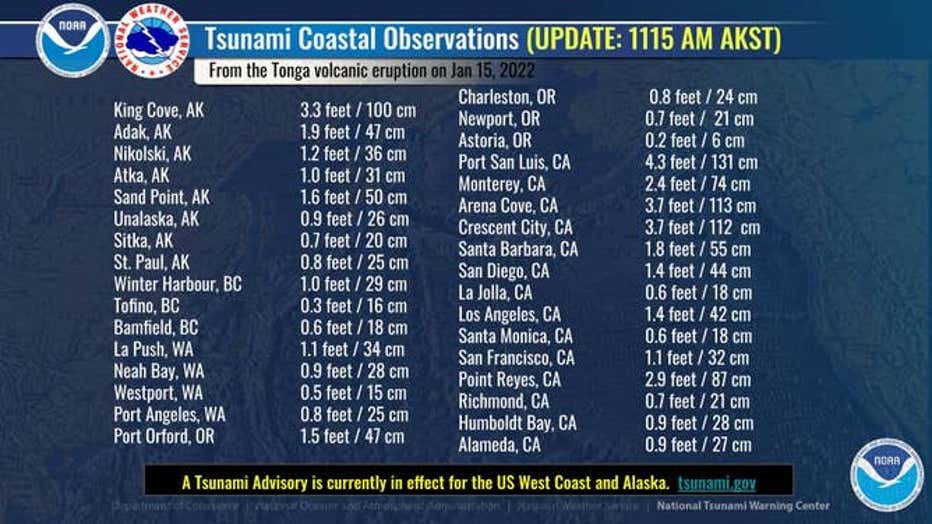 Along the West Coast of North America, California saw some of the highest water rises. A monitoring site in central California reported a sea-level rise of 4.3 feet.

Most reporting sites saw a water rise of less than 3 feet, and no significant issues were reported. Those tsunami advisories were canceled after monitoring stations reported wave activity in the eastern Pacific returned to a more normal stage.

Fortunately, significant inundation of coastal regions of the U.S. was not reported, and damage was limited to mostly marinas.

RELATED: What is a tsunami and what causes them?