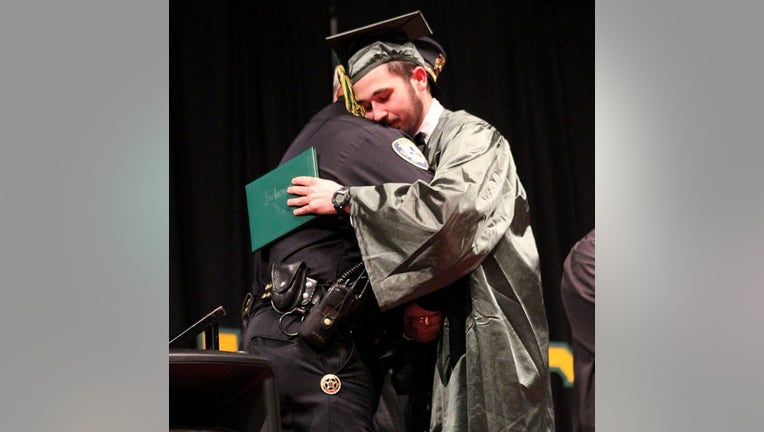 ORANGE COUNTY, Texas -- A police officer who had tell an 18-year-old last week that his parents had died in a motorcycle accident kept his promise and showed up at the teen's high school graduation over the weekend.

Lt. Eric Ellison was tasked with telling 18-year-old Kazzie Portie his parents died on May 24 when a pickup truck smashed into their motorcycle. The driver of the truck faces two manslaughter charges.

When Ellison arrived at the family's home, Portie was alone, according to BuzzFeed News. Ellison told KBMT breaking the news to Portie was one of the toughest things he has ever done.

Portie told Ellison his graduation from Cypress–Mauriceville High School was only a few days away, so Ellison promised he would be there to support him.

“I walked up on the stage he looked at me and I looked at him and we both cried and that's OK,” Ellison told KBMT.

As Portie crossed the stage, the entire senior class stood and cheered for him. After he was given his diploma, Ellison was waiting for him at the other end of the stage.

“If you didn't have a wet eye you needed to check your pulse, The Montagne Center was the loudest I have ever heard it,” Ellison told KBMT.

Portie told BuzzFeed News he has received an outpouring of support from the entire community, including Ellison.

“Seeing Officer Ellison there to congratulate me meant the world to me,” he said. “It was so nice to see that he actually showed a genuine care for me and my family’s situation instead of us just being another ‘case.’”

I am HUMBLED for the positive comments I've received about being there for Kazzie. I am simply amazed that Kazzie Portie's story has gone viral to several news sources. I just want everybody to remember that through this tragedy, this was ALL about Kazzie and his day to shine. I just did what I would want someone to do if I had left my girls early.

The LC-M Class of 2015 and the LC-M community made that happen. Please keep ALL the Portie family in your prayers and they go forward from this tragedy. God Speed Kaz, you've got a great future ahead of you.