An off-duty Milwaukee police detective was shot while trying to stop a robbery in progress in the Historic Third Ward.

MILWAUKEE - An off-duty Milwaukee police detective was shot while trying to stop a robbery in progress in the Historic Third Ward on Thursday afternoon, Jan. 13.

Officials said a suspect unsuccessfully attempted to steal a vehicle with three children inside near Water and Buffalo around 2 p.m. The suspect left the vehicle and began to leave the scene.

The driver of that vehicle then found her cellphone and went into a nearby business. When inside the business, the suspect that tried to steal the vehicle approached the woman and attempted to rob her.

An off-duty Milwaukee Police Department detective intervened, announced that he was an officer and attempted to detain the suspect.

A struggle ensued, and the suspect brandished a firearm, officials said. The suspect fired multiple shots at the off-duty detective – striking him multiple times – and fled the scene. The detective returned gunfire; at this time, there is no indication the officer's gunfire struck anyone.

Witnesses told FOX6 News off-camera that they heard a handful of shots before a slew of sirens. People in nearby businesses were told to stay inside.

"Heard a bunch of sirens. He was supposed to have a meeting, and they wouldn't let the client in to go see him," witness Jarrod Mikulecky said. "The police wouldn't let him in the building, so we were pretty scared at that point."

Police took an 18-year-old man and a 17-year-old boy into custody after a pursuit ensued shortly after the shooting of an off-duty Milwaukee police detective in the Third Ward.

Police took an 18-year-old man and a 17-year-old boy into custody after a pursuit ensued shortly after the shooting.

Officers spotted the suspects' vehicle and tried to stop it near 27th and State – more than two miles away from the scene in the Historic Third Ward.

A pursuit began and stretched just over two miles until, near 29th and Burleigh, the suspects fled on foot in an alley after their vehicle crashed.

"It was so loud that I heard sirens, like a loud bang and stuff like that," said Walter Love, who lives near 29th and Burleigh. "I run a recording studio, we were making music and then all you heard was ‘errrrr! Boom!’ – and then it was ‘wawawa’ several, several, several sirens."

FOX6 News confirmed that the suspects' vehicle had been stolen from Menomonee Falls on Monday. Thursday night, it was towed away. 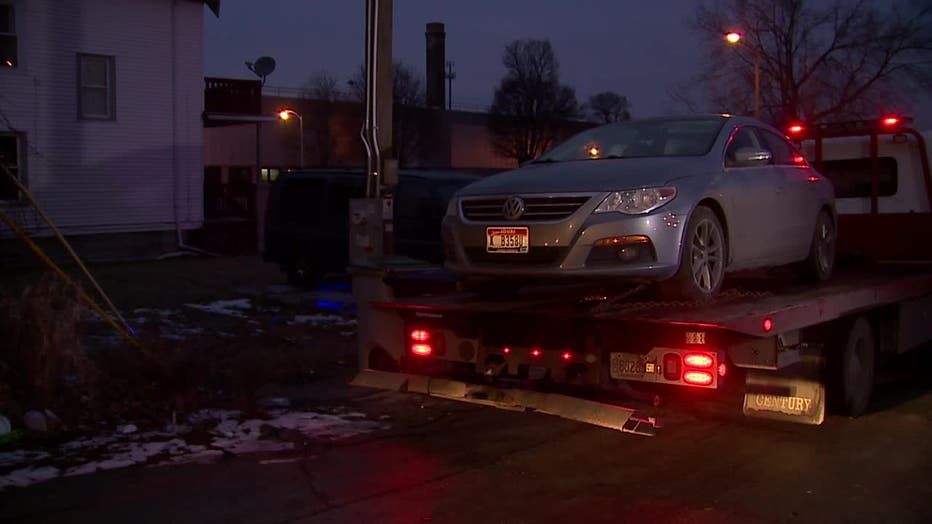 The crime scene lined the block as police searched the area after the pursuit ended. Neighbors, like Love, were disappointed that the area become the endpoint of a crime.

"It just goes to show everything doesn’t happen in the inner city. It happened down there, and it just ended up here," Love said. "It’s just really appalling that it landed over here."

Criminal charges will be referred to the Milwaukee County District Attorney's Office in the coming days, and the investigation remains active. The Milwaukee Office of the FBI as well as ATF are assisting in this investigation.

Milwaukee Police Chief Jeffrey Norman offered an update on an off-duty police officer who was shot trying to stop a robbery in the Third Ward.

The detective is a 37-year-old man with seven years of service with the Milwaukee Police Department. He suffered life-threatening injuries but is listed in stable condition.

"Again, I want to remind everyone, this was an off-duty detective, probably just ordering food," said Milwaukee Police Chief Jeffrey Norman. "He went into danger without even hesitation. Absolutely proud of the men and women of the Milwaukee Police Department; proud that we are able to be professional on and off duty."

"Enough, enough. Folks in this city have had enough with the violence, particularly the deadly gun violence that we've seen plaguing this community year in and year out," said Acting Mayor Cavalier Johnson. "This police officer…This was his day off – and still, still he sprung into action to protect and to serve."

We would like to thank the citizens who rendered aid to our detective as well as the professional care and assistance from the Milwaukee Fire Department and numerous law enforcement agencies who responded to this incident.

The Milwaukee Police Association is sickened by the acts of the violent criminals who shot our Detective with no regard for human life. Our Detective acted heroically to protect his community. We ask for all the prayers you can send for his quick recovery.

The Milwaukee County Sheriff’s Office stands with the Milwaukee Police Department and its heroic, off-duty detective who was shot while confronting a criminal suspect Thursday afternoon in Milwaukee’s Third Ward. Our prayers of comfort are with the detective and his family this evening.

We renew our call to the people of Milwaukee County to work collaboratively to reduce violent crime. Let us engage parents and the social services, faith-based, business, and academic communities to offer guidance to help people make better choices. And let us strongly support law enforcement as our members continue to serve and protect our community.

I want to thank the off duty-officer that stepped between a dangerous individual and a woman in need of help. As he receives medical attention for gun-related wounds, he and his family are top of mind for many of us. Because of his actions, someone else got to go home tonight.

In other unrelated occurrences, there were others who lost their lives in Milwaukee today. While all of the impacted families are in our prayers, we know what people want most is an end to this violence. Period.

We can no longer task force or study our way out of this. It’s time to do the things that we know work and prioritize them. We need to get illegal guns off the streets, strategically deploy resources and law enforcement, and coordinate a response across city departments. In short, we need to work on reducing crime like our lives, and the success of this city depends on it.

Milwaukee is far more than the sum of these acts. Days like this demand that we remember who we are and what we love about this city. And then we do what’s necessary to protect it.

Yesterday, one of our own Milwaukee police officers was the victim of a shooting in the Third Ward. The off-duty detective witnessed an attempted robbery, and heroically stepped in without hesitation to support a citizen in need.

Thankfully, no one was fatally harmed in this incident, and I wish the detective a full and speedy recovery. I also want to commend the Milwaukee Police Department (MPD) for their rapid response to this incident that resulted in two suspects being apprehended.

I, like so many others across the city, am fed up with the violence. What happened yesterday in the Third Ward, and continues to happen daily elsewhere, is outrageous. No one should have to fear for their life or well-being while grabbing food, visiting a shop or just walking through a neighborhood.

This incident is just the latest of many incidents over the last two years involving robberies, auto thefts and carjackings in a neighborhood that has historically been considered very safe. It is past time for MPD to saturate the area and dedicate significantly greater resources in the Third Ward to ensure a much higher level of safety for those who live, work and visit the area.

I am extremely grateful for the heroic actions of an off-duty Milwaukee police officer who yesterday put his own life at risk to help a citizen in the Third Ward. His instinctive nature to step in helped protect the lives of others who were in the area, and he is a shining example of the commitment our law enforcement officials have when it comes to protecting and serving our community.

I hope the officer recovers fully and quickly, and I wish him and his family the best at this time.

The men and women of the Milwaukee Police Department who responded swiftly to this incident also deserve kudos. Their quick work led to the arrests of two suspects, and I hope to see that justice in this case is served.

The Milwaukee Office of Violence Prevention extends gratitude for the actions of the off-duty Milwaukee police officer who swiftly responded to an incident at Shake Shack in the Third Ward yesterday. Our thoughts and prayers are with this officer and his family. We wish him a quick and full recovery and send our gratitude to the trauma staff, doctors, and surgeons at Froedtert Hospital for their exemplary care of this officer. We also extend our deepest appreciation to the traveling nurse who was on site, the staff and management of Shake Shack, and the first responders who stepped in to provide aid to those affected by this traumatic event.

Incidents such as yesterday's are traumatic to all who are involved and witnessed the actions of the suspects. The Milwaukee Office of Violence Prevention is heartbroken for all affected by this event, and our staff has been in contact with the woman, her children, and Shake Shack staff who were involved in yesterday’s incident to provide trauma support. Gun violence affects our entire community, and the Office of Violence Prevention remains committed to providing support, care, advocacy, and intervention to all victims of violence in our city.

West Milwaukee police are investigating the homicide of a 14-year-old boy found dead near 39th and National around 8:30 p.m. Wednesday.

Milwaukee police are investigating a fatal shooting that occurred on Thursday, Jan. 13 near Farwell and Albion.