NEW YORK - The first nor'easter of the season brought heavy rain, gusty winds and flooding to some areas of the U.S. Northeast.

Forecasters said the storm was expected to batter the region through Wednesday evening. The heaviest rain was expected to continue into Tuesday afternoon, and particularly in New Jersey and eastern Pennsylvania, according to FOX 5 New York.

Several water rescues were reported Tuesday morning in Monmouth County, New Jersey, where 1.5 to 3.5 inches of rain had fallen overnight, according to the National Weather Service.

The governors of New Jersey and New York each issued a state of emergency for their state ahead of the storm.

Murphy's declaration, which covers the entire state, allows the state to free up resources and take steps to respond to the storm.

In New York, Gov. Kathy Hochul also issued the state of emergency for several counties, including all of New York City. Hochul encouraged all commuters to "take precaution" ahead of the heavy rainfall.

Rainfall totals are expected to be between 1-2 inches with isolated pockets receiving more than 2 inches by Wednesday evening.

Coastal New Jersey could see 3-6 inches of rain from the storm, while northern parts of the state could get 3-7 inches through Tuesday night, according to FOX 5 New York. New York City and surrounding areas could see 3-7 inches.

Rainfall rates could reach 1 inch per hour at times. 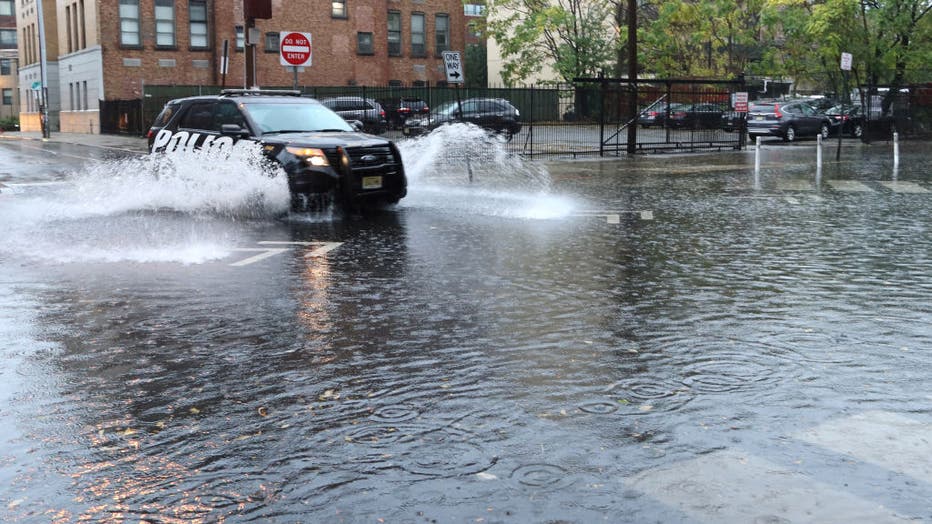 HOBOKEN, NJ - OCTOBER 26: A police car drives through a flooded intersection as a Nor'easter storm passes through the New York and New Jersey area on Oct. 26, 2021, in Hoboken, New Jersey. (Photo by Gary Hershorn/Getty Images)

"Flash flooding is a concern for much of the Northeast, but especially for northern New Jersey into southern New England where a Slight Risk of Excessive Rainfall is in effect today," the National Weather Service said Tuesday morning.

Downed trees or power lines are also possible due to damaging thunderstorm winds, which were forecast to reach up to 50 mph in some areas — particularly on the East End of Long Island. There were 3,200 power outages reported across the state as of late morning, FOX 5 New York reported.

The storm prompted renewed flooding concerns to areas that were hit by remnants of Hurricane Ida last month, causing widespread flooding across the region and dozens of related deaths.

What is a nor'easter?

A nor'easter is a storm along the East Coast with winds typically arriving from the northeast, according to the National Weather Service. These storms can occur at any time of year but are most frequent and "most violent" between September and April.

Nor'easters usually develop in the latitudes between Georgia and New Jersey, within 100 miles east or west of the East Coast. They typically reach maximum intensity near New England and the Maritime Provinces of Canada, forecasters say.

These storms nearly always bring precipitation in the form of heavy rain or snow, as well as heavy winds, rough seas and occasional coastal flooding, according to the National Weather Service.

The heavily populated region between Washington D.C., Philadelphia, New York and Boston are particularly impacted by nor’easters — which have been responsible for billions of dollars in damage in the past.

FOX 5 NY contributed to this report. This story was reported from Cincinnati.