WATERFORD -- A freak accident sends hot air balloons flying into the sky crashing into each other before falling to the ground pulling vehicles and crew members with it. A serene scene in Waterford changed in a flash with this morning's stormy weather.

A moment of panic overtook spectators at the Waterford Balloonfest.

As ominous clouds loomed over the field, a gust of wind carried away several balloons -- it was all captured on cell phone video.

"Happened just like that it was crazy," said Nathan Fricke, crew member.

Nathan Fricke says the incident was surreal. He was part of the crew helping take the balloons down when he was also overcome by the strong winds which knocked him to the ground and carried others away.

"People are just getting pulled, there is nothing you can do," said Fricke. 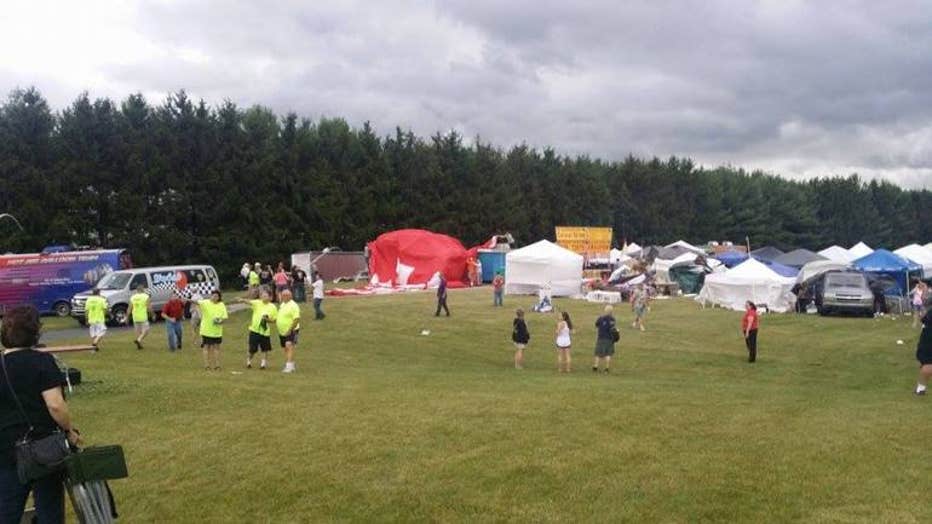 "All of a sudden a gust of wind came through and everyone came through and everyone tried the best they could to try and hold the balloons down, they weren't inflated yet but wind took the balloon -- they pulled on the ropes, rope took one of the men up. There was actually a pilot in the basket with another gentleman and they did the best they could and he went up and another man fell down," said Amber Riley-Eckman, Waterford Fire Department and Chamber of Commerce.

Riley-Eckman says people watched helplessly as a vehicle was pulled into a row of tents.

"It was a fluke what happened but nobody could stop it -- some people a little shaken up from it," said Riley-Eckman.

Event Director for hot air balloons, Ken Walter, says the balloons involved were tethered to show a display to the crowd. Organizers decided to cancel rides after monitoring Saturday's thunderstorms.

"We took all the precautions. We saw it getting closer so we decided to take it down completely," said Walter.

Thankfully everyone involved in the incident is okay and there were no significant injuries. The hot air balloons will go back up weather permitting, but there still are lots of fun things to do at the festival.

Officials with Waterford Balloonfest say they are praising the actions of the pilot. They are grateful and relieved after a near miss at the event in Waterford.

"Several balloons were inflated as part of a static display for a gathering crowd. Event Director, Ken Walter, and pilot of the tethered balloon, Scott McClinton, suspected weather conditions were about to change. That was when they made the decision to call off the display. As they were deflating the balloons, wind conditions did indeed change and a strong gust carried a deflating balloon across the launch field. The pilot and one passenger/crew member were unharmed, despite the rough landing. The balloon was damaged, along with several tents on the edge of the field, but there were no injuries reported."

"This is why we screen all of our pilots carefully. He made the call at the right time and we were able to get the line of spectators out of harms way. It was skill and training that prevented this from becoming a much worse incident. The pilot absolutely made the right call. It was certainly a dramatic scene to watch, but again we had the skills and training in the right place at the right time to manage the incident," said Walter.

The Waterford Balloonfest continues through Saturday evening and Sunday morning, with over 20 balloonists participating from all over the Midwest.