CHARLOTTE, N.C. — A student with a pistol killed two people and wounded four others at the University of North Carolina-Charlotte before campus police disarmed and arrested him, authorities said. The motive for the attack, which had people scrambling to find safe spaces on the last day of classes, was not immediately clear.

A vigil was planned for Wednesday on the campus of the University of North Carolina-Charlotte, where the shooting on Tuesday upended the last day of class. The governor vowed a hard look at what happened in order to prevent future shootings.

"A student should not have to fear for his or her life when they are on our campuses," Gov. Roy Cooper, a Democrat, told reporters. "Parents should not have to worry about their students when they send them off to school. And I know that this violence has to stop. ... In the coming days we will take a hard look at all of this to see what we need to do going forward."

Campus Police Chief Jeff Baker said authorities received a call in the late afternoon that someone with a pistol had shot several students. Officers assembling nearby for a concert rushed to the classroom building and arrested the gunman in the room where the shooting took place.

Two people were killed, and three remained in critical condition late Tuesday. Baker said a fourth person's injuries were less serious. Students were among the victims, but officials would not say how many.

The Charlotte-Mecklenburg Police Department identified the suspect as Trystan Terrell, 22. He's in custody, charged with two counts of murder, four counts of attempted murder, possessing and firing a weapon on educational property, and assault with a deadly weapon. 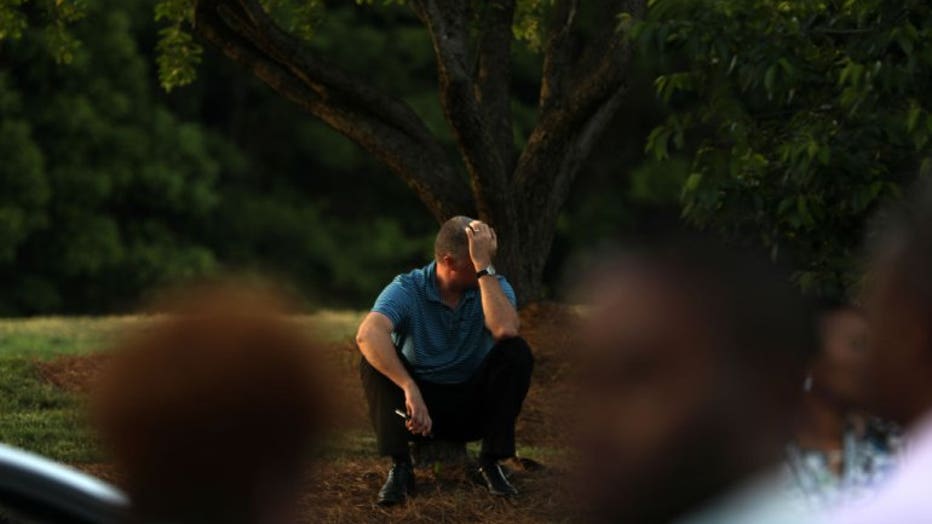 Family members and friends wait for their loved ones at a staging area after a shooting on the campus of University of North Carolina Charlotte in University City, Charlotte, on April 30, 2019. - At least two people were killed and several wounded in

The suspect's grandfather, Paul Rold of Arlington, Texas, said Terrell and his father moved to Charlotte from the Dallas area about two years ago after his mother died. Terrell taught himself French and Portuguese with the help of a language learning program his grandfather bought him and was attending UNC-Charlotte, Rold said. But Terrell never showed any interest in guns or other weapons, and the news he may have been involved in a mass shooting was stunning, said Rold, who had not heard about the Charlotte attack before being contacted by an Associated Press reporter.

"You're describing someone foreign to me," Rold said in a telephone interview Tuesday night. "This is not in his DNA."

Monifa Drayton, an adjunct professor, was walking onto campus when she heard the shots. She said she directed students fleeing the scene to take cover inside a parking deck. 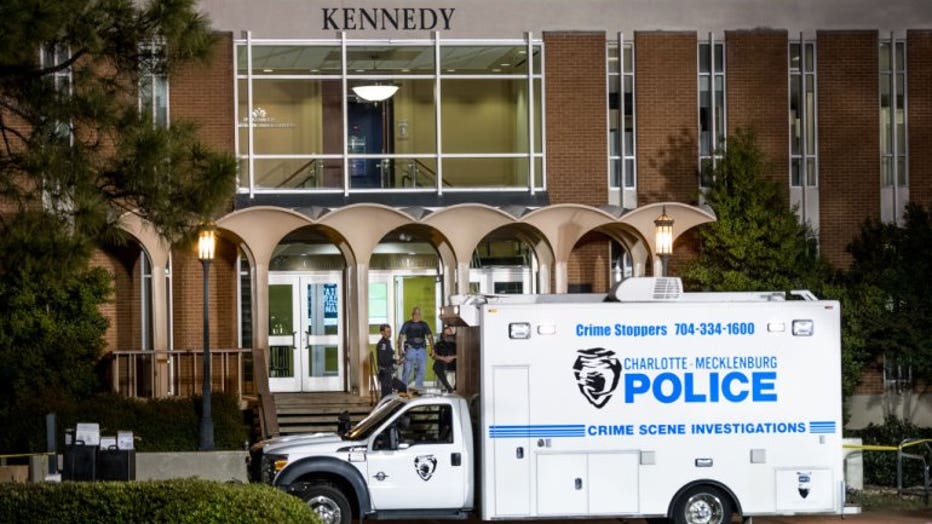 CHARLOTTE, NC - MAY 1: Charlotte-Mecklenburg law enforcement stand in front front of the Kennedy building where a gunman killed two people and injured four students at UNC Charlotte May 1, 2019 in Charlotte, North Carolina. Campus police responded to

She added: "My thought was, I've lived my life, I've had a really good life, so, these students deserve the same. And so, whatever I could do to help any child to safety, that's what I was going to do."

The shooting prompted a lockdown and caused panic across campus. Aerial shots from local television news outlets showed police officers running toward a building, while another view showed students running on a campus sidewalk.

"Just loud bangs. A couple loud bangs and then we just saw everyone run out of the building, like nervous, like a scared run like they were looking behind," said Antonio Rodriguez, 24, who was visiting campus for his friend's art show.

The university has more than 26,500 students and 3,000 faculty and staff. The campus is northeast of the city center and is surrounded by residential areas.

Spenser Gray, a junior, said she was watching another student's presentation in a nearby campus building when the alert about the shooting popped up on everyone's computer screens.

She said she panicked: "We had no idea where he was ... so we were just expecting them at any moment coming into the classroom."

Susan Harden, an UNCC professor and Mecklenburg County Commissioner, left home when she heard of the shooting and went to a staging area to provide support.

Harden said she has taught inside the Kennedy building, where the shootings happened.

"It breaks my heart. We're torn up about what's happened," Harden said. "Students should be able to learn in peace and in safety and professors ought to be able to do their jobs in safety."