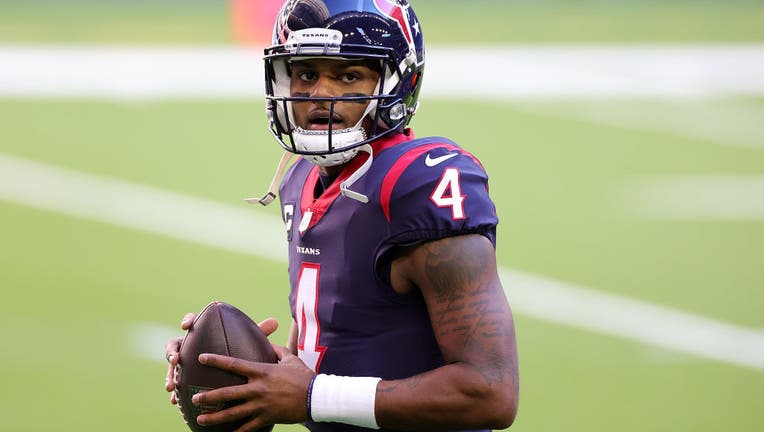 HOUSTON, TEXAS - JANUARY 03: Deshaun Watson #4 of the Houston Texans participates in warmups prior to a game against the Tennessee Titans at NRG Stadium on January 03, 2021 in Houston, Texas. (Photo by Carmen Mandato/Getty Images)

"We are deeply concerned by the disturbing allegations and have suspended Deshaun Watson," Nike said in a statement released Wednesday. "We will continue to closely monitor the situation."

Also in a statement on Wednesday, Reliant Energy said their relationship with Watson as a brand ambassador was scheduled to end this spring prior to the allegations, and there are no plans for future engagements or contracts with him.

"Reliant is aware of pending civil lawsuits and a criminal investigation involving Deshaun Watson, Houston Texans quarterback," Reliant Energy said in a statement. "Our relationship with Watson as a brand ambassador was scheduled to end this spring prior to these allegations, and there are no plans for future engagements or contracts with him. We take accusations of this nature very seriously. With respect to the legal process, we do not have any further comment on this matter."

Twenty-two civil lawsuits have been filed against Watson in which women accuse him of assault and harassment during massage sessions.

The first woman to file a lawsuit spoke publicly for the first time during the press conference.

Attorney Tony Buzbee and one of the women who filed a lawsuit against Houston Texans quarterback Deshaun Watson hold a news conference. Note: Contains graphic details.

Last week, the Houston Police Department said a criminal complaint had been filed with their department concerning Watson. They did not provide further details.

Attorney Tony Buzbee, who is representing the women who filed the lawsuits, said at least two women provided statements to the police without his involvement.

Following the press conference on Tuesday, the NFL said in a statement, "The allegations are deeply disturbing and we take these issues very seriously. Immediately following news of the first allegations last month, and as has been reported, we initiated an investigation under the NFL's Personal Conduct Policy. We are continuing to closely monitor all developments in the matter."