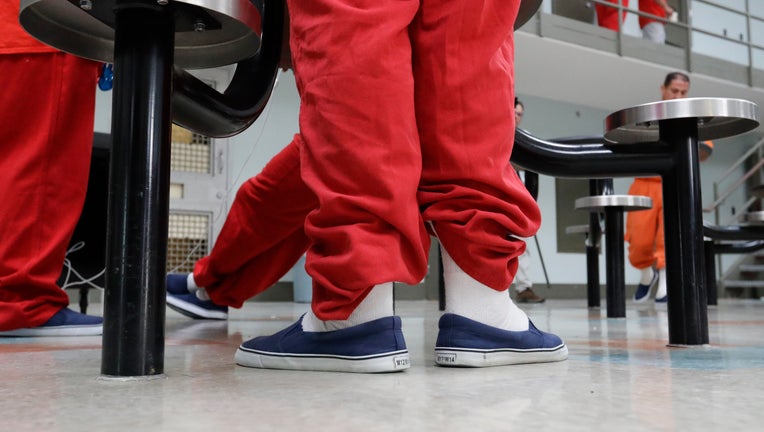 In this Wednesday, Aug. 28, 2019, photo detainees gather in a common area at one of the housing units at the Adelanto ICE Processing Center in Adelanto, Calif. The facility is a privately operated immigration detention center run by the GEO Group, wh

EL PASO, Texas (Border Report) — Two senators from New Mexico are asking the federal government to investigate conditions and oversight for detainees at the Otero County facility and all other Immigration and Customs Enforcement (ICE) migrant detention centers.

U.S. Sens. Martin Heinrich, D-N.M) and Tom Udall, D-N.M. sent a letter to the Department of Homeland Security (DHS) Acting Secretary Chad Wolf and DHS Inspector General Joseph Cuffari on Monday requesting the investigation and asking that the findings be made public.

“We are troubled by continued reports of inhumane treatment at ICE detention facilities that appear to be widespread across the country,” the senators said in the letter.
On Oct. 25, New Mexico Gov. Michelle Lujan Grisham sent a letter to DHS calling for an investigation at the Otero County Processing Center, where poor conditions reportedly have led detainees to attempt suicides.
“We write in support of a full review of conditions at that facility and all other ICE detention facilities,” wrote the senators.
In addition, the two senators want a full review of the training that officers, agents, and contractors receive regarding the processing, medical evaluation, and care of the detainees, as well as the safety of transgender individuals in DHS custody. The lawmakers cited concerns about reports of surveillance footage relating to the death of Roxana Hernandez in U.S. custody they say may have been destroyed.

“We request that (the Office of the Inspector General) specifically evaluate ICE’s practice of long-term detention of individuals with final removal orders whose home countries refuse to accept them back and the overall cost-effectiveness of long-term detention of individuals who do not present a flight risk or a danger to the community,” Heinrich and Udall wrote.
The senators’ letter also requests information from DHS regarding:

You can view the full letter here.