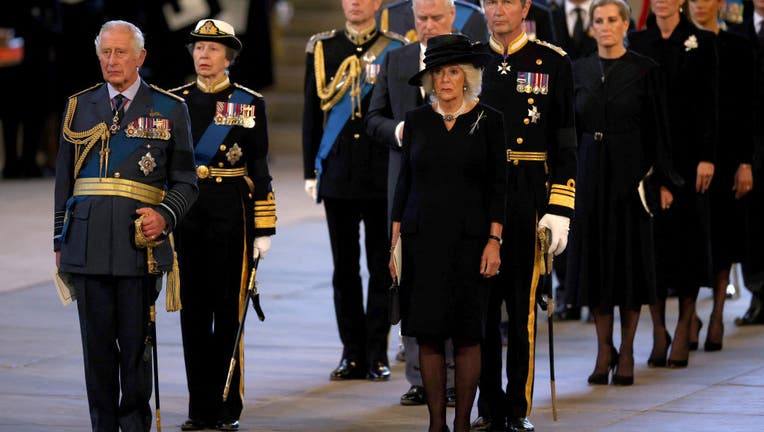 The United Kingdom’s first family is notoriously private and may seem mysterious to some, but the death of Queen Elizabeth II has once again thrust the royal family’s scrutinized dynamic into the public eye.

Immediate members are taking part in the days-long ceremonial traditions of laying a monarch to rest.

Here is a look at the key faces and players in the royal family:

Charles, the eldest son of Queen Elizabeth II and Prince Philip, became king immediately following the death of his mother. His coronation is still being planned and has yet to be announced.

Meanwhile, the 73-year-old monarch has been under intense media scrutiny and has taken a grueling schedule. He’s attended his accession ceremony, addressed legislators in Parliament and walked in several processions behind the coffin alongside his siblings.

The public had also voiced questions about his health over photos showing his swollen hands.

Lord Speaker John McFall (L) and speaker of the House of Commons Lindsay Hoyle (R) and Britain's King Charles III take part in the presentation of Addresses by both Houses of Parliament as Camilla, Queen Consort looks on in Westminster Hall, inside the Palace of Westminster on September 12, 2022 in London, England. (Photo by Henry Nicholls-WPA Pool/Getty Images)

RELATED: What is 'Operation London Bridge'? All about King Charles III's succession, accession and coronation

After decades of contention, it was decided Camilla would assume the title of Queen Consort with her husband’s accession.

The ambiguity of her future title was due to sensitivity about her status as his second wife — and the wave of grief that washed over Britain following the death of his former wife, Princess Diana, in a car crash in 1997.

But over the decades, Camilla has won over large parts of the British public with her discretion, down-to-earth personality and loyalty to her husband.

She has been by her husband’s side continuously in the last week.

RELATED: Camilla becomes queen, but without the sovereign’s powers

William and Kate, the Prince and Princess of Wales

William, long second-in-line to the throne, is now the heir apparent after his father. That means William and Kate, both 40 and parents of three young children, immediately assume a much more central role as the new face of the monarchy.

And with that already comes the heightened scrutiny.

During a joint appearance to read messages left by mourners with his brother Prince Harry and his wife, Meghan, the couple’s seemingly cold distance was widely noted in comparison to Prince Harry and Meghan’s warm body language. Some also pointed to royal protocol, in that public displays of affection at such a somber event are rare for senior members of the family. The public also took note that William didn’t open the car door for Kate.

Kate now holds the title of Princess of Wales, the first person since William’s late mother, Princess Diana. William and Kate's children, George, Charlotte, and Louis are now second, third, and fourth in line to the throne.

William and Kate also inherit Charles and Camilla’s other honorary titles, the Duke and Duchess of Cornwall. That means managing and taking income from the Duchy of Cornwall, an estate comprising land across the U.K. that is reportedly worth 1 billion pounds.

Their "walkabout" on Saturday was the first time the brothers have appeared amicably together in public since March 2020.

Catherine, Princess of Wales, Prince William, Prince of Wales, Prince Harry, Duke of Sussex, and Meghan, Duchess of Sussex on the long Walk at Windsor Castle arrive to view flowers and tributes to HM Queen Elizabeth on September 10, 2022 in Windsor, England. (Photo by Chris Jackson/Getty Images)

Harry and Meghan, The Duke and Duchess of Sussex

Prince Harry, 37, quit as a senior royal and moved to the U.S. two years ago.

Harry is now fourth in line to the throne, with his children being sixth and seventh.

Both Harry and Meghan repeatedly have aired their unhappiness with the royals since their UK departure. The two did a tell-all interview with Oprah Winfrey in March 2021 where they shared details about the royal family.

As a non-working royal, Prince Harry isn’t allowed to wear his military uniform during the ceremonies, yhough he was seen in uniform during a special vigil the grandchildren attended for their grandmother Saturday evening.

Princess Anne is the second-born to Queen Elizabeth II and Prince Philip and remains one of the few working royals.

Anne, Princess Royal was also married twice, first to Capt. Mark Phillips in 1973 and then to Vice-Admiral Timothy Laurence in 1992. Laurence has been seen throughout several ceremonial processions.

A touching moment when Anne curtsied to her mother’s coffin drew media attention.

Prince Andrew is the queen’s third child and second son, and the child who’s perhaps drawn even more media attention and scrutiny than his older brother Charles.

Andrew, Duke of York was married to Sarah, Duchess of York, but the two divorced in 1996. Prince Andrew took a step back from his royal duties — and was effectively banished from public life — in 2019 due to a sexual misconduct scandal and involvement with Jeffrey Epstein.

As a non-working royal, he was also seen out of uniform during processional marches. He’s reportedly been granted permission to wear his uniform at his mother’s funeral, a decision some met with contempt since Prince Harry hasn’t been allowed the same.

As the queen’s second son, Andrew is eighth in line to the throne. His two daughters, Princesses Beatrice and Eugenie, are ninth and eleventh. Andrew’s grandchildren are tenth and twelfth.

Prince Andrew, Duke of York walks behind Queen Elizabeth II's Coffin as it heads to St Giles Cathedral, after making its way along The Royal Mile on September 12, 2022 in Edinburgh, Scotland. (Photo by Robert Perry/Getty Images)

Edward, Earl of Wessex, the youngest son of Queen Elizabeth II and Prince Phillip is married to Sophie, Countess of Wessex.

These two have mostly stayed out of the spotlight for many years, though Edward is one of the few remaining working royals.

He and his two children are now thirteenth, fourteenth, and fifteenth in line to the throne, respectively.

Sophie, Countess of Wessex and Edward, Earl of Wessex attend a Service of Prayer and Reflection for the Life of Queen Elizabeth II at St Giles' Cathedral, on September 12, 2022 in Edinburgh, Scotland. (Photo Jane Barlow - WPA Pool/Getty Images)

This story was reported from Detroit. The Associated Press and FOX News contributed.