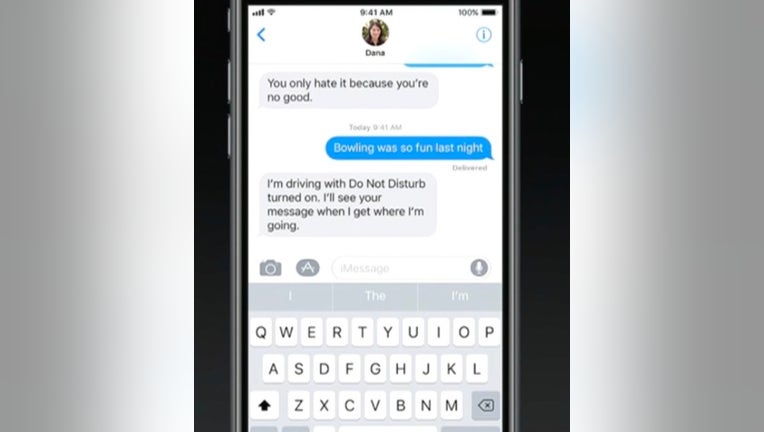 Apple announced on Monday a new iOS 11 featured called "Do Not Disturb While Driving" that mutes notifications and sends automatic replies if you receive a message while driving.

The new safety feature suppresses notifications and blocks notifications. When connected via Bluetooth, it can also detect speed to automatically determine if a user is driving.

If a passenger's phone disables notifications, they will be able to override the safety feature to allow messaging.

The free iOS upgrade will be available in the fall.

After touting the work of Apple's developers, Cook announced that Amazon is coming to Apple TV with its Prime Video app. Cook said Apple was pleased about the partnership, and mentioned some original Amazon content like Transparent.

The announcement marks a detente of sorts between the two companies, which have been locked in a streaming rivalry for years. In 2015, Amazon went so far as to pull listings for the Apple TV from its online store.

Apple previewed the next version of watchOS 4, its operating system for the Apple Watch. There are new watch faces. A Siri face will show more info from the assistant, like flight times, controls for smart home devices and third-party notifications. A kaleidoscope face shows trippy animations, and new Toy Story character watch faces let Woody tell you the time.

The watch can communicate with some gym equipment to share data between the two -- like your heart rate or the treadmill's incline. Starting in the fall, Apple Watch compatible equipment will start coming to gyms from companies like Cybex, Schwinn and Matrix.

If you hit workout goals, you'll now get fancier animations to give you a greater sense of satisfaction. There are new workout updates, like one that can tell when you're swimming and reach the end of the lane. The free OS upgrade will be available in the fall.

Apple is pushing the Mac as a machine that's made for virtual reality, with new hardware and software updates built for VR.

The company is releasing a new version of its operating system for Macs. Coming this fall, macOS will be called High Sierra.

The OS is getting VR support, says Craig Federighi, including support for Unity, Unreal and Metal for VR. Expect more details later during the event.

There are number of small changes in High Sierra. Safari is adding autoplay blocking, so loud videos don't start playing without your approval. The browser is also adding "intelligent" tracking prevention in order to cut down on ads that follow you around the Internet.

The Photos app is adding new filters, and Apple says it has improved the face detection feature. Categories, faces and favorites will be synchronized across devices.

Apple is porting its Apple File System to macOS. It's a mostly under-the-hood change, but users will notice a difference. For example, duplicating a file will be nearly instant. Video compression will be higher quality, according to Apple.

"It's time for a more modern file system," said Federighi.

An iMac for pros

Apple really wants to hold on to its professional users. Its Mac Pro hasn't been updated since 2013, and Apple says the next version will be available some time next year. To bridge the gap, it's built a superpowered version of its all-in-one iMac that will be available in December.

The iMac Pro is a matte gray 27-inch computer that Apple says is the most powerful Mac it's ever made. Starting at $4,999 for the basic configuration, the 5K machine will come with an 8-core, 10-core or 18-core Xeon processors. It can have up to 22 teraflops of graphics power. Apple says the machine is fast enough for real-time 3D rendering, code compiling and designing virtual reality content.