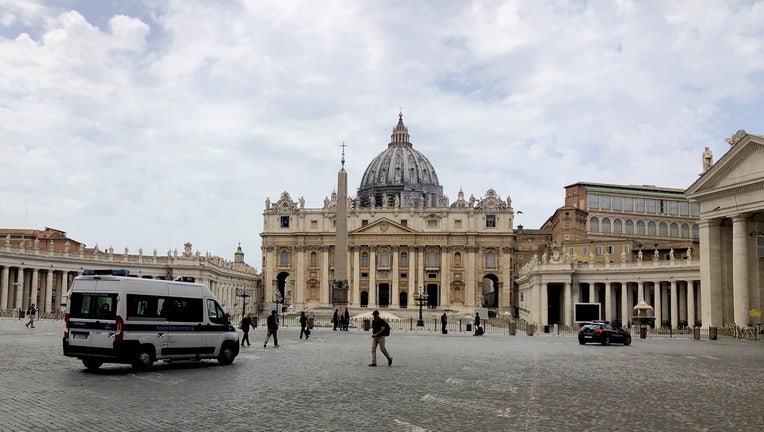 VATICAN CITY, VATICAN - MAY 18, 2020: People seen outside St Peter's Basilica that has been closed for public since March 10 amid the COVID-19 coronavirus pandemic. Access to the Basilica will be controlled by servicemen of the Vatican City State Gen

ROME - The Vatican’s Santa Marta hotel was built to sequester cardinals during papal elections. It's now sequestering soon-to-be cardinals in town for this weekend’s ceremony to get their red hats: A handful are in protective coronavirus quarantine, confined to their rooms on Vatican orders and getting meals delivered to their doors.

The 10-day quarantines, with COVID-19 tests administered at the start and finish, are just one example of how Saturday's ceremony to elevate new cardinals is like nothing the Holy See has ever seen.

“They told me it would be like this but I didn’t think it would be so strict!” marveled Cardinal-designate Felipe Arizmendi Esquivel, the retired archbishop of Chiapas, Mexico.

During a Zoom call with The Associated Press from his hotel room, Esquivel said he had thought there might be some exceptions to the lockdown for new cardinals. “No! Here, it doesn’t matter if you’re a cardinal or a pope. The virus doesn’t respect anyone,” he said.

Pope Francis on Saturday will elevate 13 clerics to the College of Cardinals, the elite group of red-robed churchmen whose primary task is to elect a new pope. It’s the seventh time Francis has named a new batch of cardinals since his election in 2013, and his imprint is increasingly shifting the balance of power away from Europe and toward the developing world.

The Vatican has said two new cardinals won’t make it to Rome for the ceremony, known as a consistory, because of COVID-19 and travel concerns: The Vatican’s ambassador to Brunei, Cardinal-designate Cornelius Sim, and the archbishop of Capiz, Philippines, Cardinal-designate Jose Advincula.

The Vatican is arranging for them, and any of the cardinals who might not make it, to participate in the ceremony remotely from their homes. They’ll get their three-pointed “biretta” hats from a Vatican ambassador or another envoy.

For those who are participating in person, the public health crisis has posed an unusual set of challenges. Italy, where the pandemic erupted in late February, is currently in the throes of a second wave. The Vatican itself has returned to a modified lockdown in recent weeks, with the Vatican Museums shuttered and a dozen Swiss Guards testing positive.

Francis, 83, has been criticized for his rather lax mask usage, but he has abided by social distancing measures to a degree. He too lives at Santa Marta, where there has been at least one positive case reported in recent months.

Usually, consistories are full of parties and crowds: Cardinals come to town with family, friends and sometimes benefactors and parishioners who get to see the new “princes of the church” up close and then attend receptions and dinners in their honor. Under normal circumstances, the consistory would be followed by “courtesy visits,” where the new cardinals greet well-wishers and the general public from the grandeur of their own reception rooms in the Apostolic Palace or Vatican auditorium.

This year, there will be no courtesy visits, and each cardinal has a 10-person limit for guests. For Esquivel, no one other than his secretary traveled with him from Mexico, so he’s inviting some priests from the residence where Mexican clergy working or studying in Rome live.

“We don’t have contact with practically anyone. It’s total isolation, but it’s necessary,” he said.

Esquivel is one of four cardinals over age 80 who are joining the college as honorary members, named by Francis to recognize their lifetime of service to the church. The other nine are under age 80 and eligible to vote in a conclave to eventually choose Francis’ successor.

History’s first Latin American pope has long sought to name cardinals from the “peripheries,” to show the universal nature of the church and boost small communities, where Catholics are a minority, with high-profile leaders.

As of Saturday, there will be 128 voting-age cardinals, 42% from Europe. The Pew Research Center notes that in 2013 Europeans made up 52% of the voting-age block, evidence of Francis' effort to decrease the strength of Europeans as a voting bloc and give greater visibility to church leaders from Asia, Africa and the Americas.

He too is concluding his quarantine in the Santa Marta hotel, where he said his meals are left on a tray outside his door. Gregory said that while he was unable to go out, at least his new red cassock was delivered from Rome’s famous clerical haberdasher, Gammarelli.

In a Zoom call, Gregory explained that a U.S.-based ecclesiastical tailor took his measurements while he was still in Washington and sent them to Gammarelli, which then made the robes to order and sent them to Santa Marta.

Fashion aside, Gregory said he was humbled by Francis’ decision to make him a cardinal and said he would return to a United States still in the throes of the pandemic with hope that vaccines against the virus will soon work.

“I hope we can use them effectively to protect people and ... once this pandemic is brought under control, to face the future with hope,” he said.

Thailand on Friday signed a $200 million deal to procure 26 million doses of a trial coronavirus vaccine developed by pharmaceutical firm AstraZeneca in collaboration with Oxford University. It is expected to be delivered in mid-2021.