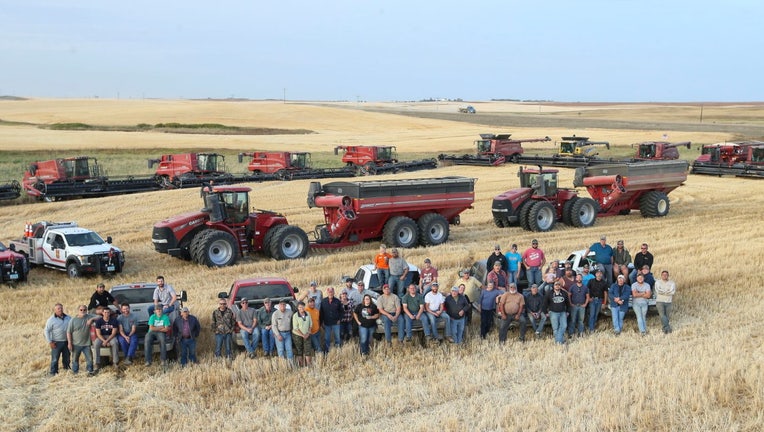 CROSBY, N.D. - A North Dakota farmer's neighbors stepped up to harvest his crops for him after he suffered a heart attack in his field.

Lane Unhjem was harvesting his wheat and canola crops on Sept. 9 when his combine caught fire, according to neighbor Don Anderson.

As Unhjem battled the blaze, he suffered a heart attack in the field.

Related: ‘She saved my life’: Police officer receives life-saving transplant from woman he put in jail 8 years ago

When his neighbors heard what happened, about 60 of them coordinated to finish the job for him -- bringing 11 combines, six grain carts and 15 tractor-trailers to harvest Unhjem's crops, KFYR reported.

Related: Rescue dog adopts kittens after the tragic death of her own puppies

It took them seven hours to harvest 1,000 acres.

The neighbors said they knew that letting the crops go unharvested would have been devastating for his family.

“Everybody knows the Unhjems, and they’re good people and good in the community," said family friend Jenna Binde. "You help your neighbor out when they need it, and don’t expect anything in return."

Anderson added, "This sort of thing happens all the time up here when health issues arise, accidents happen, and needs are noticed, that’s when rural people shine."

Unhjem had to be airlifted to the hospital, where he is in stable condition.