Video shows scene of NC plane crash along I-85

(Warning: Troubling imagery) Footage recorded by Benjamin Nelson shows the plane engulfed in flames on the I-85 near Davidson County Airport following a crash on Feb. 16, 2022. (Credit: Benjamin Nelson via Storyful)

LEXINGTON, N.C. - An airplane crashed into a tractor-trailer on Wednesday along I-85 in Davidson County, North Carolina, killing the pilot and sparking a fire along the interstate, authorities said.

A twin-engine Beechcraft Barron crashed into a 2016 Freightliner tractor-trailer on the southbound side of the interstate near the Davidson County Airport in Lexington just before 5:15 p.m., North Carolina state highway patrol said.

The plane was taking off from the airport when it lost altitude "for unknown reasons" and crashed into the tractor-trailer, officials said. The tractor-trailer overturned and another vehicle, a 2019 Ford truck also headed southbound, was damaged from the debris of the initial collision.

The pilot, who was the sole occupant, died at the scene and was later identified as Raymond John Ackley, 43, from Charlotte.

The driver of the tractor-trailer, identified as 41-year-old Barrin Davis, of Concord, was taken to a local hospital with non-life-threatening injuries, authorities said. The driver of the Ford truck was not injured.

Video footage from the scene showed both the tractor and trailer on its left side. The tail section of the aircraft was seen next to the overturned rig. 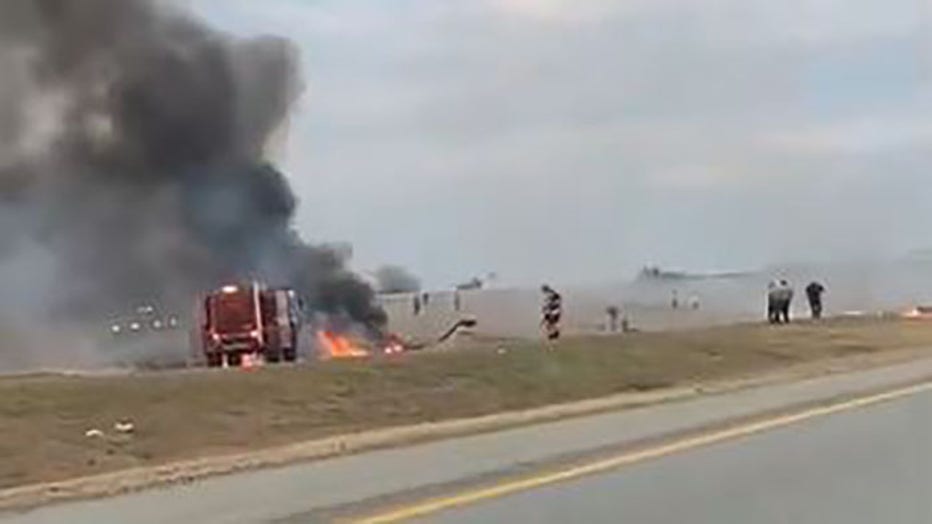 A screengrab from the video shows the scene of the crash along I-85 in Davidson County, North Carolina, on Feb. 16, 2022. (Credit: Benjamin Nelson via Storyful)

"As soon as we got right over the highway, we saw the tail of the plane and we saw the tractor-trailer learning on its side and both were on fire," a witness, Donald Holt Sr., told WRAL-TV. "As we got a little further, we saw a bunch of smoke — white smoke and black smoke."

"The flames were coming. It was too hot [and] it was too dangerous to get close to it," Holt added.

Another witness told FOX 8 that he was driving along I-85 on his way home from work when he saw the plane coming down quickly.

"Pure shock," Lee Doggette told the local station. "I felt horrible because I know that those people had to succumb to the accident, you know? So that was my first thing… how unfortunate that is. I can’t really put it in words."

Footage recorded by local resident Benjamin Nelson showed the plane engulfed in flames, while other videos showed firefighters spraying water as flames burned the ground next to I-85 with some debris scattered on the road.

The Federal Aviation Administration said it would investigate the crash along with the National Transportation Safety Board, but provided no additional details.