The state of Wisconsin orders a Waukesha in-home child care provider to shut down for having too many children without a license. But parents who used her services say that's not their only concern.

WAUKESHA, Wis. - A Waukesha child care provider faces a criminal charge for lying to police about her identity. Now, parents like Adrienne Mayberry want to know what she's hiding.

When Mayberry needed someone to watch her son, she put her trust in a single mom with an in-home day care.

"She had books. She had educational materials. She had flashcards," Mayberry said.

Melissa Paul took her kids there, too.

"She told us she was a Christian and she goes to church," Paul said.

"She seems nice and the price is good," he said. 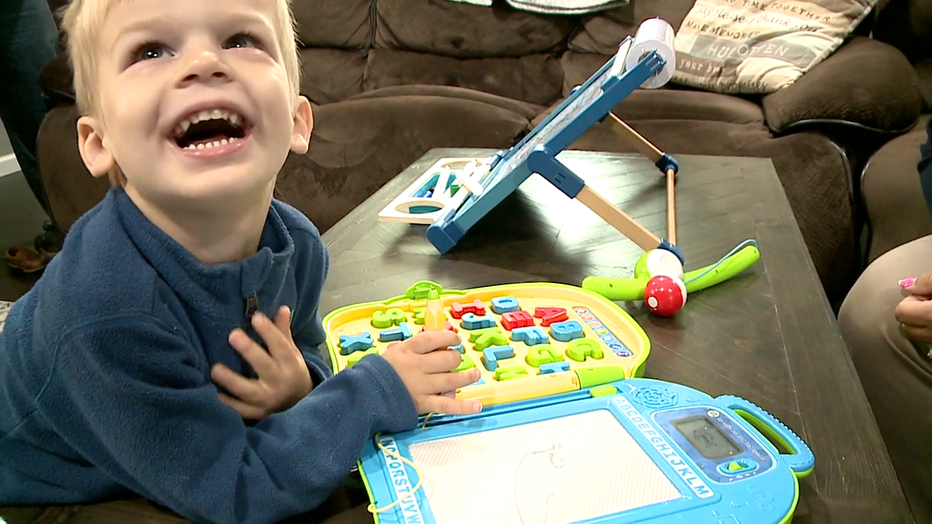 For two years, Adrienne Mayberry sent her son, Ethan, to a woman she knew until recently as Gabriella Anderson.

All three parents say the child care provider gave them the same name.

"It was Gabriella Anderson from the day we met her," Mayberry said.

What is your name?

"Actually, what is your name?" asked FOX6 Investigator Bryan Polcyn when he recently found the provider standing in the front yard of her Waukesha townhome.

"I'm not talking to anybody," the woman replied. "I haven't done anything."

She admits Gabriella Anderson is not her name.

"I'm not telling you," she answered, as she went back inside her home and closed the door.

According to Waukesha police, her real name is Dawn Marie Astudillo -- one of five names she's used in five states. Her maiden name is Dawn Kaminsky. She's also been previously married with the names Dawn Anderson and Dawn Craft. 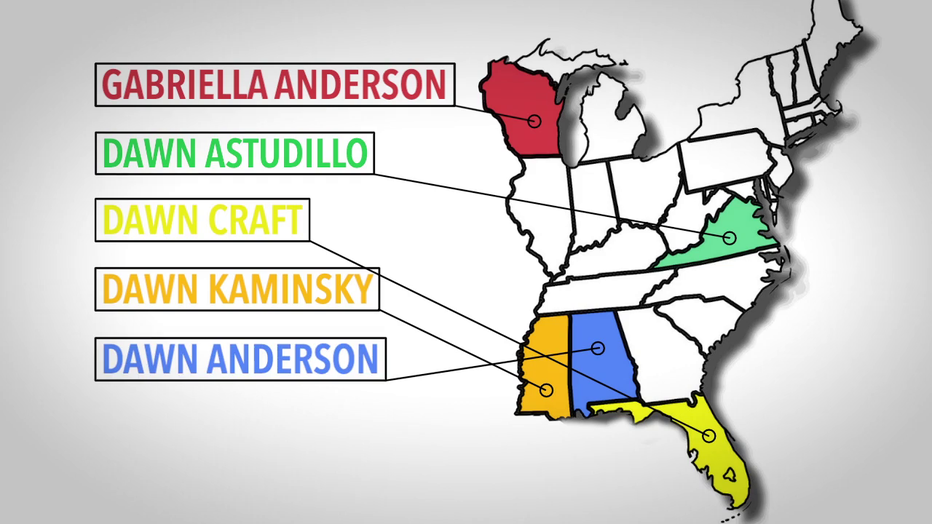 Astudillo's date of birth and social security number are tied to names in several US states, mostly in the southeast. They appear to be a combination of former married names and a maiden name. Gabriella Anderson appears to be the only fabricated name

For the past two years, maybe more, she's run an unlicensed day care out of a Waukesha townhome at 2006 Kilps Avenue. Some of the parents who used her child care services say she was a bit unusual, but they saw nothing alarming.

"She had an odd voice and spoke quietly, but that was like our only complaint," Paul said.

You don't need a license in Wisconsin to operate a day care, as long as you're caring for fewer than four children, but Astudillo had more.

"Probably upwards of 9 or 10," Mayberry recalled.

Things began to unravel for Astudillo in July, around the time Dan Goodman came for an interview.

"We have a 2- and 4-year-old. A boy and girl," he said. The woman he knew as Gabriella "had to reassure us over and over again that she had a master's degree in child care, and that's good, but she had to keep telling us that."

Then she introduced her daughter, whose name, she said, was also Gabriella.

"And I said, 'Well, that's your name, too, right?'" said Goodman. "It's not very common that a mom and a daughter would have the same name."

Suspicious, he ran a reverse search of the baby sitter's phone number. He found it attached to the name Dawn Kaminsky. So he confronted "Gabriella" with the newfound information. 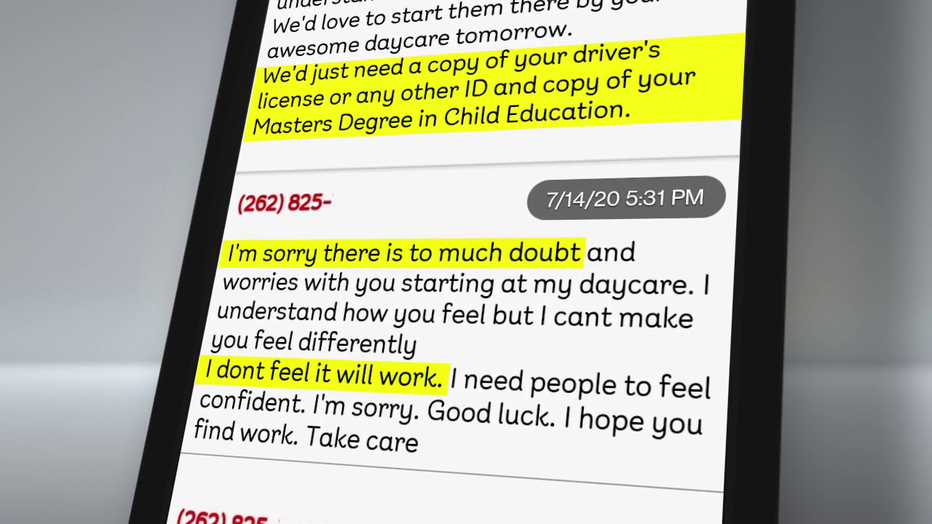 When Dan Goodman asked for verification of her identity, Astudillo declined to provide any.

But the baby sitter never gave a yes or no answer, so Goodman asked to see a driver's license and proof of her master's degree. That's when the sitter replied that she was "sorry there is to [sic] much doubt... I don't feel it will work."

"She's lying about who she is, and she's watching people's kids," he said, "and I don't feel comfortable with that."

Goodman called police on July 17. What he didn't know then is just three days earlier -- the same day he came for a visit -- the Waukesha County district attorney charged Dawn Astudillo with obstruction for lying to police about her identity last winter.

"How do you lie to the police?" Paul said.

According to court records, Astudillo took her daughter to Waukesha Memorial Hospital in January. While she was there, hospital workers say she was acting nervous. They suspected she was lying about her identity and possibly attempting to commit health insurance fraud, so they called police. The officers who responded say Astudillo lied not only about her own name and age but her daughter's age, as well. They accuse her of maintaining the lie for 30 to 40 minutes before finally admitting her true identity. 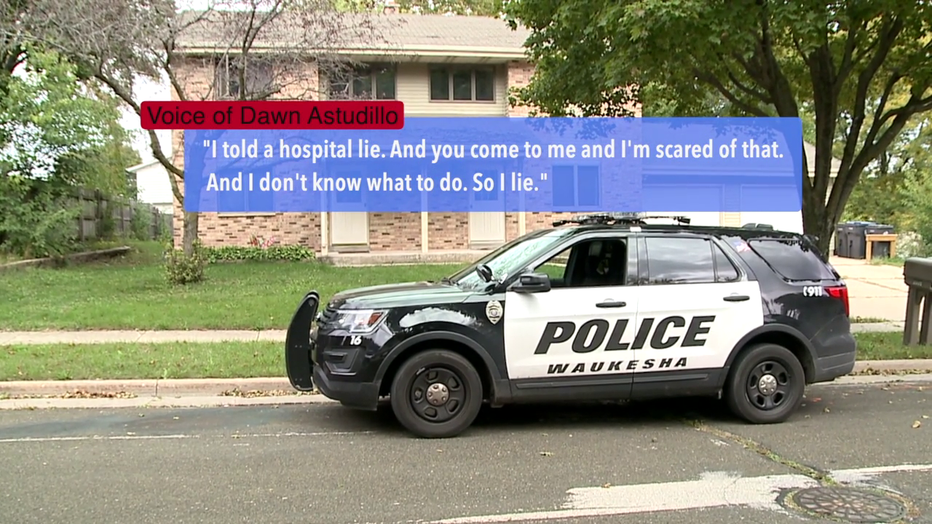 Astudillo is accused of lying to Waukesha police about her identity last winter. When police came to her house in late September, she admitted to lying because she was 'scared.'

By now, there's little question Astudillo has been lying about her identity.

What still confounds her former clients is why. All they can do, it seems, is speculate.

"She must have a record in some other state," Paul said.

"I'm thinking there must be something in her past she doesn`t want us to know about," Mayberry said.

The FOX6 Investigators ran a background search on Astudillo and all of her aliases. We found court records in Florida that show Dawn Marie Craft -- same date of birth -- was convicted of child abuse in 1991. We ordered the original case file to find out what happened, but the clerk of courts in Lake County, Florida, said the case is so old -- 29 years -- that the original file has been destroyed. In 2009, a Mississippi law firm paid for a certified copy of the file, but the firm tells FOX6 it cannot locate the file in its records either.

The parents we talked to say that doesn't matter.

"Would you ever send your child to someone who has a past child abuse conviction?" Polcyn asked.

And then there were questions about Astudillo's own child.

"She said her daughter was turning 4. She had invites where it said 'turning 4' on them," Paul said.

"Why would she lie about her daughter's age?" Polcyn asked.

"There are some concerns about the child she has," Mayberry said.

By the time the FOX6 Investigators tried to reach Astudillo, she had changed her phone number and taken down her social media accounts that bore the name Gabriella Anderson, so we paid her a visit in person. As a photographer waited for FOX6 Investigator Bryan Polcyn to arrive, Astudillo called police herself.

"Sir, do you see?" she appealed to the officer, pointing to Polcyn and photojournalist David McAlister.

"As long as they stay on the sidewalk," the officer replied.

At that, Astudillo turned and walked back in her house, refusing to answer questions about her true identity. Soon, officers followed her inside to ask more about her child.

"How old is she?" the officer asks as his remote microphone captures the conversation.

"She is 5," Astudillo responds.

"If you show up to a hospital and you lie about the identity of a child, " the officer explains, "the hospital naturally has a fear that the child may not be yours."

Astudillo assured officers the child is indeed hers, and that she only lied because she did not have insurance.

Waukesha police left the home satisfied the child was not missing or exploited, but there is one more deception that concerned her former clients.

"You have an order to close your day care. You don't even tell us?" Paul said.

On July 31, the Wisconsin Department of Children and Families found Astudillo was running an illegal day care with too many children. They ordered her to stop. For two more months, she told her clients nothing. She even tried to recruit new ones.

"It feels wrong now that I know all this. I feel like other people should at least know that she's lying about her identity," Paul said.

Mayberry admits her son was happy with the woman she knew as Gabreilla. She has few complaints about her care, and yet, she feels her trust has been compromised.

"I don't want any other parent to kind of fall into this trap," she said.

She and the others want their experience to serve as a warning.

"You need to be more diligent right now," Goodman said. "You can't just drop your kids off with someone you don't know."

According to court records in Virginia, Dawn Astudillo's husband, Ricardo Esteban Astudillo, surrendered his parental rights in 2014 due to domestic violence. He appealed, attempting to restore those rights, but lost. Dawn Astudillo told Waukesha police she and her estranged husband remain married and are on good terms. She said they still speak every weekend. Parents who used to send their kids to her say they saw him on rare occasions at the home, but it was "awkward."

None of the parents we talked to described any kind of abuse or substandard care. Still, the Wisconsin Department of Children and Families now includes Dawn Astudillo among its list of more than 300 illegally operated day care providers.