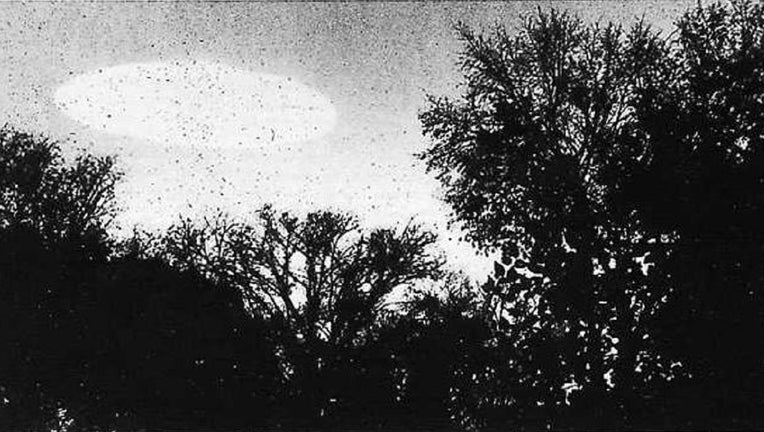 A photo from the CIA "X-Files" showing a possible UFO sighting in Minneapolis, Minnesota on Oct. 20, 1960.

(FOX 9) - It’s been 43 years since Minnesota’s most infamous UFO sighting after a deputy with the Marshall County Sheriff's Office had a close encounter with a flying object. Now decades later, hundreds of unidentified flying objects are still being reported across the state.

Over 2,000 possible Minnesota UFO sightings have been recorded by the National UFO Reporting Center (NUFORC), ranking the state 23rd in the nation for most reported sightings, according to the NUFORC database.

"I think it [UFO reports] will awaken the human population on our planet to the fact that we appear to be being visited by UFOs on a routine basis," director of NUFORC Peter Davenport told FOX 9. "And the value of that information will probably be the greatest, most important scientific question that’s ever confronted mankind: ‘Are we alone in this galaxy, or are we not?’"

NUFORC receives roughly 6,000-8,000 UFO sightings from across the country per year and some internationally. The Minnesota chapter of the Mutual UFO Network (MUFON) gets an estimated 100 reported sightings per year.

RELATED: The truth is out there: UFO Sightings up this year

However, several UFO sightings can be explained by Starlink satellites, planets, twinkling stars, and weather phenomena, while others cannot.

Deputy Val Johnson is one of those unexplained UFO encounters that left investigators with more questions than answers. 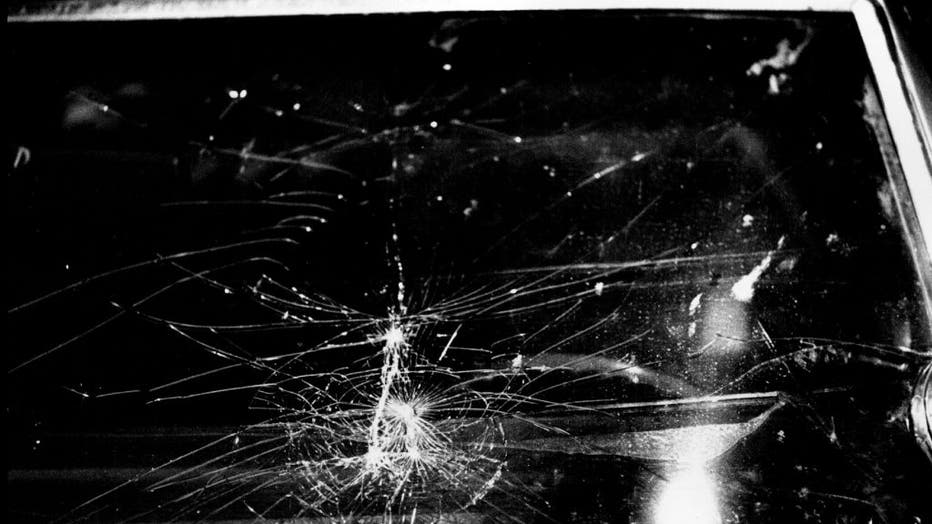 OSLO, MN. - NOVEMBER 1979: Val Johnson, a 35-year-old Marshall County Deputy Sheriff, reported being engulfed by a flash of light while patrolling Minnesota Highway 220 near Stephen, in the northwest corner of the state, the evening of August 27, 197

On Aug. 27, 1979, Johnson was outside the town of Stephen when he saw a small bright light was hovering above the road. The object followed him for about a mile and a half and ultimately shattered his windshield and bent the antennae on his patrol car 90 degrees.

Johnson woke up 39 minutes later with burns around his eyes. The clock on his dashboard and watch was 14 minutes behind.

"My opinion is that's completely genuine," the chief investigator for the Minnesota chapter of the Mutual UFO Network, Bill McNeff, told FOX 9. "The deputy ran into an unidentified object that was of unearthly origin and suffered these very strange effects in his car." 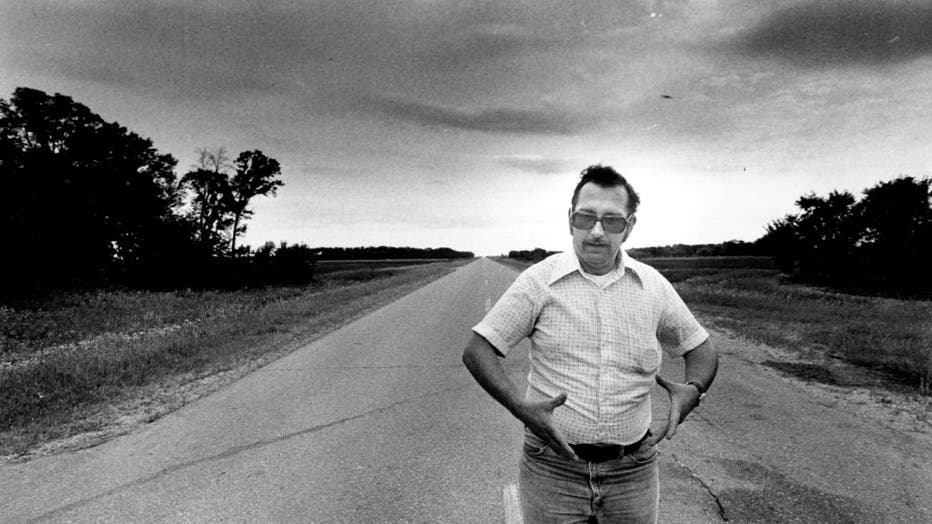 MARSHALL COUNTY, MN. - SEPTEMBER 1979: Val Johnson standing where he says he was engulfed by a flash of light on the evening of August 27, 1979, indicated how big the beam was as it approached. Johnson, a 35-year-old Marshall County Deputy Sheriff, r

McNeff estimates that historically, only around 10% of UFO cases turn out to be unidentified. But, over the past 20 or 30 years, authentic sightings have increased, and now approximately 20% of experiences MUFON investigates can’t be explained.

Here are some of the most fascinating UFO cases McNeff investigated in Wisconsin and Minnesota during his career.

The X Files of Minnesota

From the archieves in Febuary 2016: A newly released photograph of a possible UFO over Minneapolis has UFO enthusiasts buzzing. (Febuary 2016)

In April 1961, Joe Simonton had a late breakfast around 11 a.m. at his farm near Eagle River, Wisconsin. Simonton thought he saw something move outside, and when he looked out his kitchen window, he saw a spacecraft on the side of his house.

Simonton walked up to this craft, which was "making a very uneasy noise," according to McNeff. The UFO opened a hatch, and an alien appeared holding a metal container.

McNeff said the alien motioned to Simonton he wanted water and handed him the container. When Simonton arrives back with the container, he sees a second alien in the back of the craft who appeared to be "flipping pancakes."

The alien handed Simonton a stack of pancakes, which he said "tasted like cardboard," according to McNeff. Shortly after, the craft closed and began to hover about 60 feet off the ground before launching into the sky.

Once Simonton reported the sighting, thousands of people showed up on his property to see where the UFO appeared. The case ultimately caught the Air Force’s attention, and it investigated the sighting as a part of Project Blue Book, McNeff said.

A 4-year-old boy named Carl made an unusual friend called "Bug Eye," who McNeff described as looking like a gray alien with black eyes.

In 1989, a mother was living in a St. Paul home near Midway with her three children when the strange event occurred. One night, Carl’s mother heard footsteps from downstairs and later heard her older son's ukulele, which was normally kept on a high shelf above the refrigerator.

To her surprise, Carl had the ukulele, and when she asked where he got it, he responded, "Bug Eye helped me get it."

The mother went back downstairs and noticed the back door was left open, and a chair with two steps on it had been pushed in front of the refrigerator.

Before Carl and his mother fell asleep, they heard a loud bang above the house. Carl responded, "Bug Eye is back."

The following day Carl went to the doctor after complaining of ear pain. McNeff said the doctor noticed a large scratch of the greek letter Omega above his diaper.

McNeff said while he was investigating the case he had Carl stand on a chair in front of the refrigerator with a step stool on top to try and grab the ukulele. Carl stood on the stepstool and stretched as far as he could to grab the ukulele, but he was still a foot too short.

"There was no way he could have gotten it," McNeff added.

Carl's name was changed to protect his identity.

The Pentagon Tuesday showcased declassified photos and video of UFOs to Congress – including a flying object without a "specific" explanation" – as lawmakers pressed military officials on the mysterious sightings.

A man living in Rosemount said he encountered a similar UFO on four separate occasions. On Aug. 4, 2017, the man was near his Rosemount home when he saw what he described as a "black object with bright orange light" coming from the craft and flying over the area, according to the MUFON database.

Nearly a month later, on Sept. 6, 2017, he saw three crafts with the same description hovering above downtown Rosemount. Two days later a singular craft returned to Inver Grove Heights. He spotted the craft one last time on March 12, 2018.

The man took photos or video footage for each of the events and submitted it to MUFON.

RELATED: Strangers in the night; UFOs, drones or government surveillance?

There has been a significant increase in sightings of UFO’s in 2020, both here in Minnesota and across the nation, according to groups who track such events.

In 2018, Dave had an unexpected guest show up around 3 a.m. in his Rochester home. McNeff said on Aug.12, 2018, Dave was playing video games and heard a door behind him open. He saw a gray alien peek around and look at him.

Dave was startled and grabbed a nearby ruler, which alarmed the alien. The alien backed out of the door and pulled it shut. After a few moments, Dave got up and started looking throughout the house, but nobody else was there.

Dave’s name was changed for the story.

As of September, at least 35 sightings have been reported to MUFON in 2022. In the past five years, MUFON recorded 449 sightings, and NUFORC recorded 425 sightings in Minnesota.

Both McNeff and Davenport say they believe there have been more UFO sightings than what’s been reported.

"The sighting doesn’t count if it’s not written down, that’s the position we take. It’s the only way to preserve the information and make it available to people who are interested in them," Davenport added.

Both NUFORC and MUFON are nonprofit organizations dedicated to the preservation of UFO sightings. NUFORC is a collective database of people’s experiences, while MUFON chapters investigate individual sightings.

When a witness reports a UFO sighting on MUFON’s website, a field investigator interviews them and enters the details of the case in MUFON’s database, which is preserved for MUFON officials and scientists who are properly cleared to access the information and analyze it, McNeff said.

People who think they’ve seen a UFO are encouraged to report sightings to MUFON and NUFORC.

The man said the objects often flew along the same flight path as planes flying in or out of Flying Cloud Airport but always after 11 p.m. when it is closed. (November 2020)