MILWAUKEE (WITI) -- Milwaukee Water Works has issued an update on the water main breaks situation that has been occurring for nearly one week. Since Saturday, May 17th, there have been EIGHTY-TWO water main breaks in the city of Milwaukee!

The Howard Avenue Water Treatment Plant was shut down on Saturday — after Milwaukee Water Works crews identified a leak on an 84-inch water main located outside the Texas Avenue Pumping Station.

Milwaukee Water Works officials say the pipeline was shut down to protect the pumping station from damage from the water leak.

Because the pumping station supplies water to the Howard Avenue Water Treatment Plant, that plant was also shut down.

When the Linnwood Plant took on the extra load — the water pressure was increased to get drinking water to the entire city and beyond.

The extra pressure was too much for some older pipes — and that led to dozens of water main breaks.

Milwaukee Water Works officials say the majority of the water main breaks have occurred in the north and northwest parts of the city of Milwaukee — as mains there don’t normally experience such an increase in pressure levels.

On Wednesday morning, May 21st, city leaders were filled in on what’s been keeping crews so busy for the past four days.

Next steps will be to fill the pipe with water and do an acoustic leak detection analysis to ensure there are no active leaks in the pipe.

Then, water can be pumped to the Howard Avenue Water Treatment Plant and the work to start up the plant will begin.  Start-up is expected to take three days after water starts flowing.

Milwaukee Water Works issued a photograph of the pipe where the leak was discovered.

It is 72" in diameter and made of steel. It is covered with a black bituminous coating for corrosion protection.

What appears to be a gash above the yellow circle is a scrape of the bituminous coating -- but is not the leak. 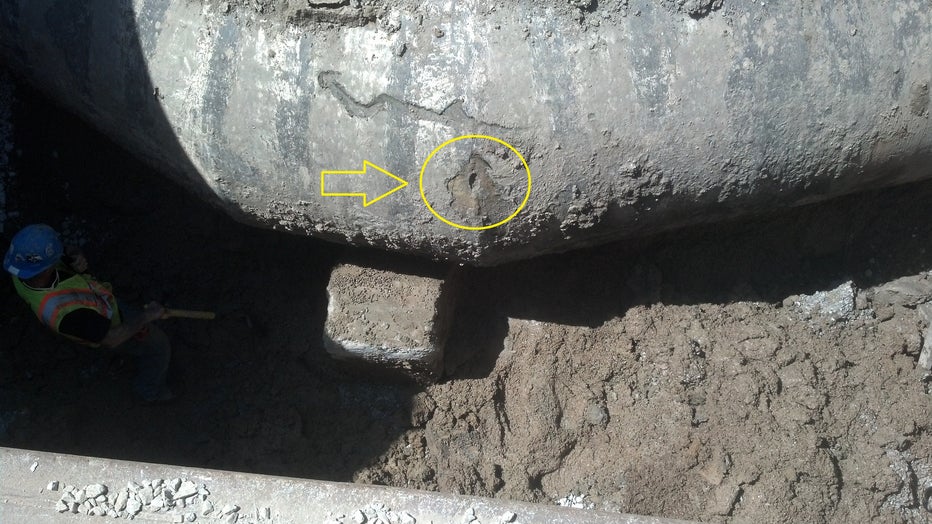