PARIS — The “Mona Lisa” is back in business.

Paris' Louvre Museum, which houses the world's most famous portrait, reopened Monday after a four-month coronavirus lockdown and without its usual huge throngs.

The reopening of the world's most-visited museum was a bright spot in what is otherwise shaping up as a grimly quiet start to the summer tourist season in France, with far fewer visitors than was normal before the pandemic closed borders.

Paris tour guide Katia Besnard Rousseau said she has had no groups to show around since France gradually started coming out of its strict two-month lockdown in May. On Monday, as the Louvre reopened, she and dozens of other guides demonstrated outside, forming a long line and holding up images of the “Mona Lisa” to highlight the hardship afflicting their industry.

“My whole season collapsed. There is no one around. It's very dramatic," said Besnard Rousseau. “To live in Paris and not be able to guide is horribly frustrating. I really miss it.” 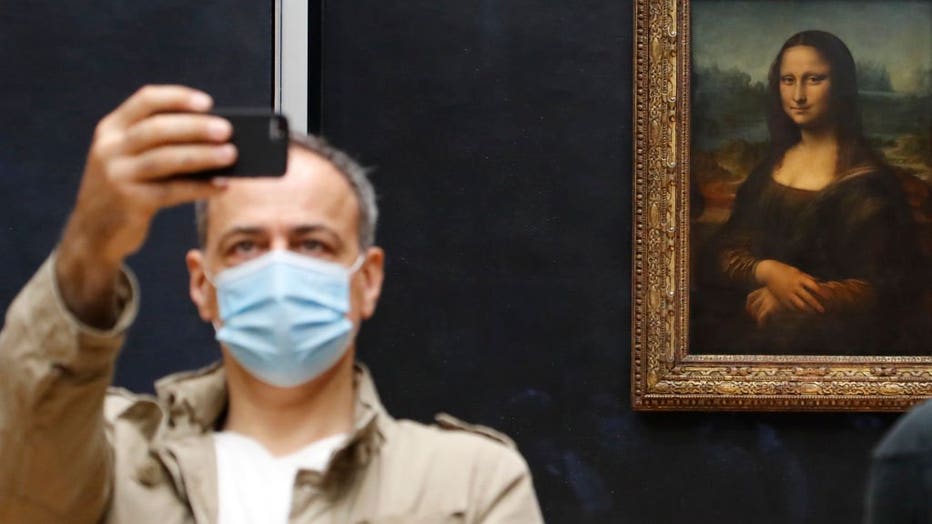 A visitor wearing a protective face mask takes a selfie in front of Leonardo da Vinci's masterpiece "Mona Lisa" also known as "La Gioconda" on the reopening day of the Louvre Museum in Paris on July 6, 2020. - The Louvre museum will reopen its doors

Inside the museum, face masks were a must and visitor numbers were limited, with reservations required. Among the trickle of returning tourists was Zino Vandenbeaghen, who traveled from Belgium to enjoy the unusual space at both the Louvre and the Palace of Versailles.

“It's very emotional for all the teams that have prepared this reopening,” said Jean-Luc Martinez, the museum director.

The bulk of the Louvre's visitors before the pandemic used to come from overseas, led by travelers from the United States.

Americans are still barred from the European Union that is gradually reopening its borders. The Louvre is hoping to instead attract visitors from closer to home, including the Paris region, but is bracing for a plunge in numbers.

Before the pandemic, as many as 50,000 people per day toured the Louvre in the busiest summer months.

The Rodin Museum in Paris, which is dedicated to the works of sculptor Auguste Rodin, is also steeling itself for a glaring plunge in typical visitor traffic when it reopens on Tuesday. The museum usually attracted 2,500 people per day - again led by Americans - during the summer months and is preparing to see a drop of as much as 80%.

The Rodin also expected o make a profit this year of 1.4 million euros ($1.6 million) but is now forecasting a loss of 3 million euros because of the pandemic's impact on visitor numbers and other sources of revenue. It hopes to make up some of the shortfall by selling limited-edition versions in bronze of some Rodin works.