Anna Young knew that if she wanted to run her first half-marathon since giving birth in February, she'd have to stop to pump her breast milk along the way. She didn't know that she would become an inspiration to other nursing mothers. 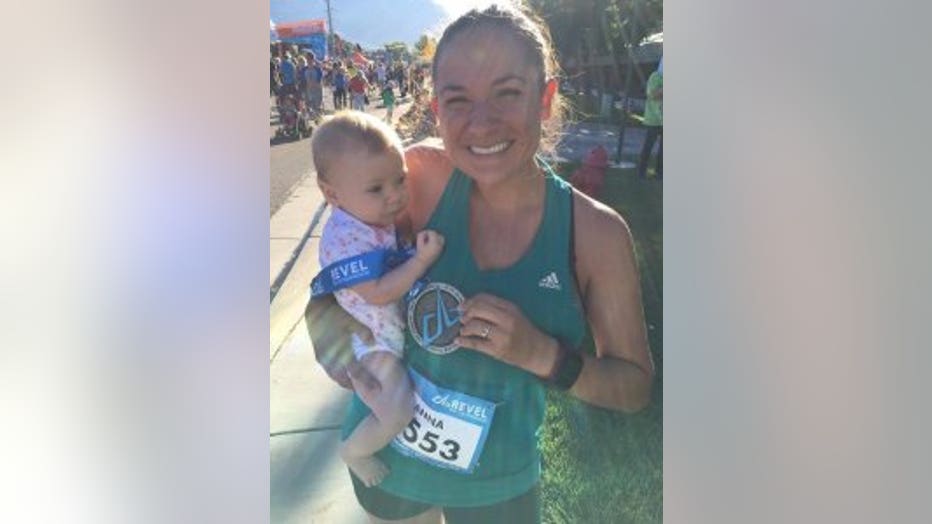 Anna Young celebrates with her 5-month-old daughter after finishing a half Marathon.

The Utah mom had run the first eight miles of the Revel Big Cottonwood Half Marathon when she needed to pump. Young was feeling really good, so she decided to just slow down and walk while pumping to avoid losing too much time.

After the race, she said she was pleased to discover that a race photographer had snapped a picture of the moment. She decided to post it on the Occupy Breastfeeding Facebook page.

"Yesterday I ran a half marathon at five months postpartum. I had to leave at 4:30am and the race started at 6:45am. I nursed my daughter before I left my house, pumped after running the first 8 miles and nursed her after I made it past the finish line. This group and Le Leche League motivated me to find a way to run my race and take care of my daughter. #normalizebreastfeeding," she wrote on Facebook.

Young was a competitive runner in high school and college, but said she hadn't run long distances in about five years.

She planned to run the race last year, before she got pregnant, but had to drop out when she injured her leg training.

Signing up for this year's race gave her motivation to start running again.

"I thought it would be a good way to start exercising again and share something I love with my daughter," she said.

Young pushed her daughter in a stroller while she went on runs, taking it easy at first.

She was a little nervous when race day came.

"The week leading up to the race I hadn't run more than six miles, so I didn't know how long it would take," Young said.

Her original plan was to take a few breaks during the race, but she felt really good, so she pushed harder.

Young ended up running at a pace of 7:58 minutes per mile and finished in just over an hour and 44 minutes.

Her baby was waiting at the finish line to congratulate her -- and eat.

She didn't think the photographer had taken any pictures of her until she saw them online.

Young said she received a lot of support from La Leche League and the Occupy Breastfeeding communities when she was having trouble breast-feeding her daughter.

She wasn't sure what the reaction would be when she posted her picture and thought about taking it down.

"It's a personal picture to me," she said. "Breast-feeding is something important to me, but it's a personal relationship between me and my daughter."

The post has gotten almost 10,000 likes and reactions and dozens of women have thanked her for sharing her experience.