Baby recovering from being in toilet pipe

Baby recovering from being in toilet pipe

BEIJING (CNN) -- The mother of a newborn rescued over the weekend from a toilet pipe in China "deeply regrets what she did," police said.

The infant, a baby boy, was saved Saturday in the Chinese city of Jinhua. He remains in the hospital, where he is reported to be in stable condition.

"Local police have found the mother. She deeply regrets what she did. Details of the case are still under investigation," Jinhua police said Tuesday on the social media website Weibo.

According to a local police officer involved in the case, the mother, whose identity has not been disclosed, said she rushed to the toilet after she began to feel stomach pains and subsequently gave birth to the baby.

"She tried to grab something to help herself because there is too much blood," the police officer said in a video interview Tuesday. "She couldn't hold the baby anymore, and he slides into the sewage through the hole of the toilet."

During questioning, the mother said she never intended for the baby to end up in the toilet, the police officer said in the interview with a local TV channel that was posted on the police's official Weibo account.

She said that after she was unable to retrieve the baby with a stick, she decided to flush the toilet to clear away the blood, according to the officer, whose name and title wasn't provided in the interview.

The woman then called her landlord, saying she'd heard a strange sound that seemed like a baby and suggested that the landlord and others come to check, the police officer said.

When police arrived at the apartment, they found a pair of pants stained with blood, he said.

Jinhua police didn't respond to a request Wednesday for further information on the case.

Police posted images of the infant at the hospital, showing him sleeping in an incubator and being cared for by nurses.

Dramatic video of his rescue made global headlines and sparked sympathy. 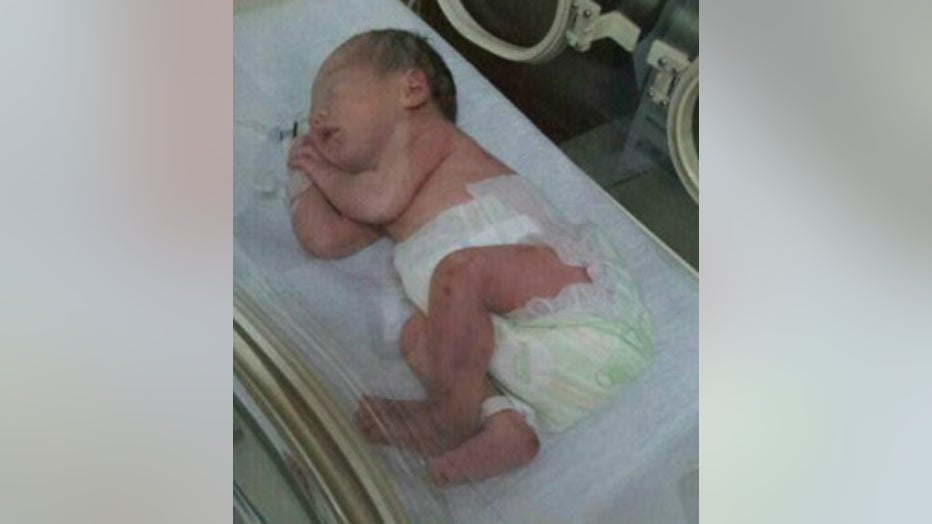 According to police, one of the firefighters involved visited the baby and sent over clothes, formula powder and diapers.

Someone else sent milk bottles and formula, along with a note that read: "Don't let the baby starve. Let's pray."

An elderly woman reported that she thought she heard an animal.

When rescuers arrived, they struggled in vain to free the infant, and ended up going to the floor below and sawing away a section of pipe containing the infant.

Still, the baby was stuck, so the section of pipe was taken to a hospital with the infant still inside.

Working together, rescuers and doctors began removing the pipe, piece by piece.

CCTV video showed the moment hands in white gloves gingerly pulled away a part of the pipe, revealing the tiny face of the newborn.