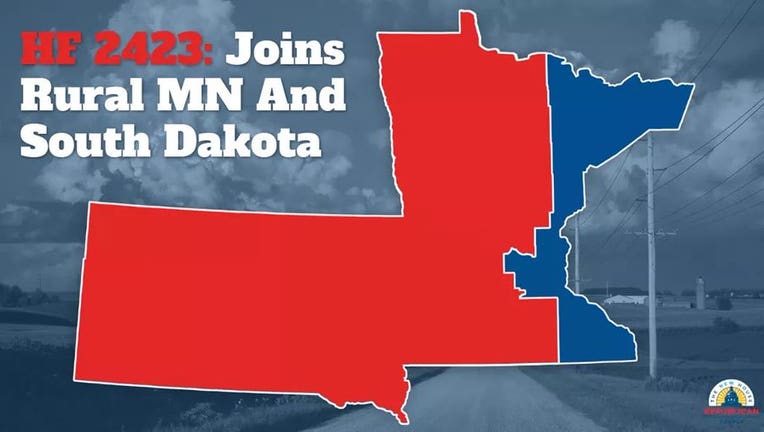 ST. PAUL, Minn. (FOX 9) - A Republican Minnesota state representative is introducing legislation that would create a pathway for Minnesota counties to secede from the state and join the South Dakota.

Rep. Jeremy Munson (R-Crystal Lake) introduced the bill Thursday and tweeted out an image of his vision, which depicted nearly every county west of the Twin Cities metro as part of a newly imagined South Dakota.

"Minnesota becomes more politically polarized every year and the metro politicians have shown us that rural Minnesotans are no longer represented by St Paul. It's time to leave," read a webpage on Munson's campaign website.

The idea echoes a similar push among rural Oregon counties to join Idaho.

Republican South Dakota Governor Kristi Noem appeared to be in support of Munson's idea, by retweeting his plan.

"In South Dakota, we roll out the red carpet for people who love personal responsibility and Freedom," tweeted Noem.

In July, Noem appeared in ad campaign attempting to persuade Minnesota businesses into relocating to South Dakota by promoting its looser COVID-19 restrictions.

While it is unlikely Munson's bill will receive enough support from his peers, if it does pass, here's how the bill outlines the process of seceding.

Under the bill, a Minnesota county would be able to apply to U.S. Congress for an amendment to the boundaries of Minnesota. The state would have to recognize the application as valid with a two-thirds vote from the county board, which would then need to be ratified by a two-thirds vote on the county ballot at the next state general election.

U.S. Congress would then need to approve the county's request to leave Minnesota by getting approval from two-thirds of members in both the House and Senate. Finally, the item would need the support from two-thirds of voters at the next occuring state general election.