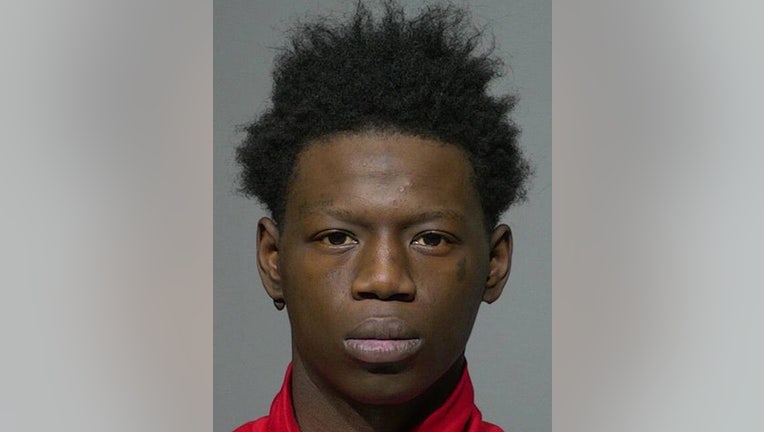 MILWAUKEE - A 20-year-old Milwaukee man is charged with first-degree reckless homicide in the fatal shooting of a man on Wednesday, Nov. 24. The accused is Donta Roberts.

According to the criminal complaint, officers were dispatched to a parking area near N. Martin Luther King Jr. Drive and Wright Street in Milwaukee around 5:30 p.m. on Nov. 24. They found the victim appeared to have a gunshot wound to his back. The victim was taken to a hospital where he later died.

Police searched the area of the shooting and "found three spent 9mm cartridge casings and pieces of car parts," the complaint says. The victim did not have a gun, but "did have an unloaded clip for a gun and some loose bullets.'"

The complaint indicates surveillance video nearby showed a red car was parked in the lot at the time of the shooting. "Muzzle flashes are seen coming from the driver's side of the car, and the car then pulls away," leaving the victim on the pavement.

Officers learned the victim's young child witnessed the shooting. The complaint indicates the victim and a person in the car argued over money the victim was owed. The complaint says the "child heard gunshots and saw the car hit a parked car, then drive away." The child later identified Roberts from a photo lineup as the shooter and driver of the red car.

Milwaukee police located the red car on Nov. 25 -- and kept surveillance on it. Officers saw another car pull near the red one. An occupant of that second car got out and "enter the red car using a key, doing something that activated the red car's alarm. During the surveillance, it appeared that the man who entered the red car was wiping down the car with a towel," the complaint says. A short time later, police stopped the second car -- and identified the driver as the defendant, Roberts.

Roberts made his initial appearance in Milwaukee County court on Tuesday, Nov. 30. Cash bond was set at $200,000. Roberts is due back in court for a preliminary hearing on Dec. 9.

A Milwaukee man trying to help his girlfriend was shot near 31st and Villard. He jumped into action after seeing thieves trying to steal her car.