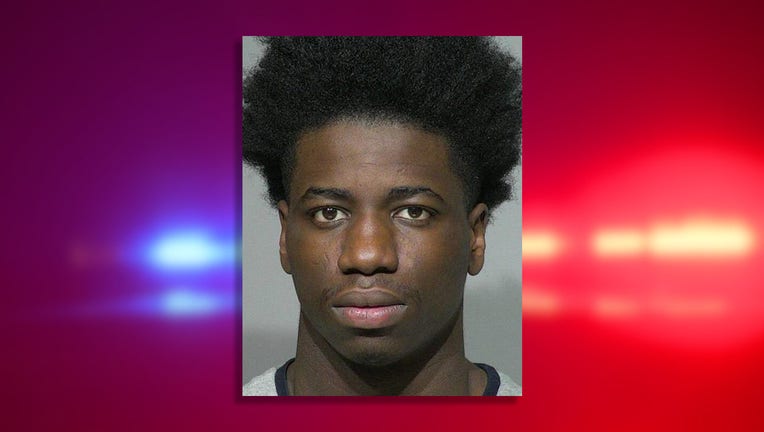 MILWAUKEE - A Milwaukee man is charged with nine total counts related to series of January armed robberies and shootings.

Prosecutors accuse Ozell Starks, 18, of being involved with four different incidents in a span of less than two weeks.

A victim told police that a suspect, since identified as Starks, said he was coming over to "smoke weed." When Starks got there, a criminal complaint states, he pointed a gun at the victim, and another suspect went through the victim's pockets before they fled with $360 in stolen cash.

A shooting was reported outside a beauty supply store. Police reviewed surveillance video from the store, which showed Starks get out of a car and go inside with three other people. Starks was seen with a gun in the waistband of his pants, the complaint states.

The car pulled off, the complaints states, and its driver fired shots toward Starks and the others. Starks and one other person were then sheen firing shots in return.

The complaint states that a victim told police he was driving away from a gas station just south of Brown Deer Road with a friend when he heard something hitting his car and felt a burning in his lower back. He then looked in the rearview mirror and saw two people shooting at his car. The victim had been shot in the back, he found, and the bullet was in his hip.

Four homes and one other vehicle were hit by bullets.

A Chinese food delivery driver arrived at a home near 94th and Silver Spring and called the customers to come down and pick it up. As the driver was entering credit card information for the purchase, the complaint states, Starks grabbed the driver and pointed a gun in his face saying: "Give me your money."

The victim gave Starks approximately $70 and then his car keys after being hit in the face. Starks ran off with the food, money and keys and drove off down Silver Spring, according to the complaint.

Police linked Starks as the suspect through the Department of Corrections; it was determined he had previously committed four similar food delivery robberies.

On Jan. 27, police arrested Starks at an apartment near Water and Juneau. Officers recovered a gun at the scene, and a ballistics test matched it to the casings recovered at the shootings after the beauty store and gas station incidents.

The next day, the complaint states, Starks admitted to being involved in booth shootings. Regarding the beauty store incident, the complaint states he told detectives that he was there, had a gun and fired retaliatory shots. Regarding the gas station incident, Starks admitted to "mean mugging" the victim and his friend. He said he doesn't really know them, but knew one of them to be a gang member. He said he followed them and shot at them.

In all, Starks is charged with:

The charges were filed Friday, Feb. 4. As of Friday, he had not yet made an initial court appearance, court documents show.