FOX6's Stephanie Grady sat down with Milwaukee’s Acting Mayor Cavalier Johnson for an interview ahead of the April 5 election where he faces former Milwaukee Alderman Bob Donovan.

MILWAUKEE - FOX6's Stephanie Grady sat down with Milwaukee’s Acting Mayor Cavalier Johnson for an interview ahead of the April 5 election where he faces former Milwaukee Alderman Bob Donovan.

A transcription of their interview is below:

Cavalier Johnson: As I was doing these [thank you] cards this morning, I was multitasking and talking to supporters, as well, and one of the supporters I reached out to brought up that very same point but pointed out our electoral victory in the primary and what we hope will be a strong electoral victory in April, as well.  But really, it boiled down to the work. He said, ‘Cavalier, you are working.’ He said, ‘Chevy, you are working really, really hard, and it shows.'

Stephanie Grady: You kind of ran away with the primary, but there’s still 35 percent of the vote that the other candidates got, not including Donovan, that you, I’m assuming, are vying for. How are you going after that? Are you feeling confident you will come out the winner on April 5? 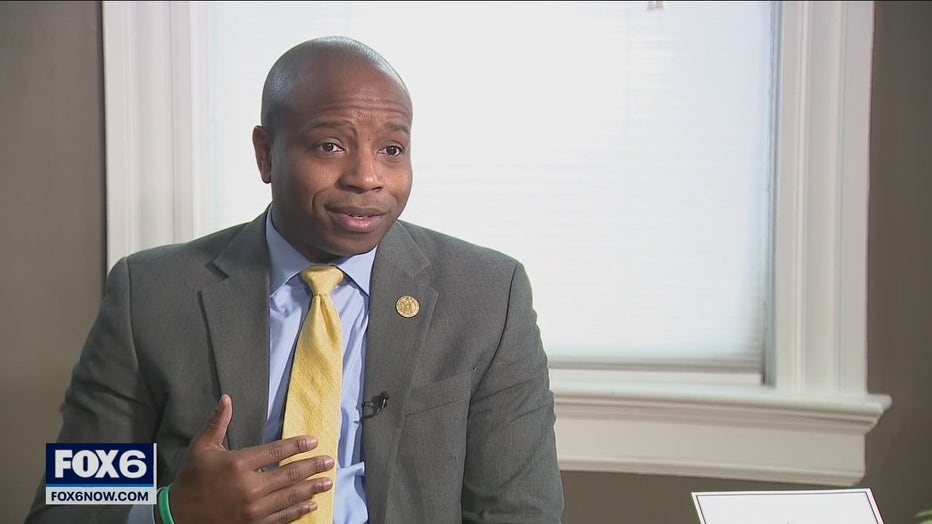 Stephanie Grady:  What do you think they care about?

Cavalier Johnson:  I think they care about public safety, first and foremost. We have an unfortunate rash of reckless driving that’s been happening in the city, and I think I'm somebody who’s going to take some action on that. They’re concerned about the shooting that we have in Milwaukee, whether it’s nonfatal shootings or homicides. That’s what folks really care about.

Stephanie Grady: What made the difference in your life to want to pursue something as lofty as the mayoral office?

Cavalier Johnson: What got me on this path considering where and how I grew up with the challenges I did, the same challenges that face many of the kids today – are chances, are opportunities, was grace from folks. I see corner stores that, when I was kid, hanging with the wrong crowd, I stole from. Instead of calling the police on me, the store clerk sat me down, and I was taking gummy worms. I wasn’t robbing the cash register or anything. The store clerk said, ‘Hey, you know I can call the police on you, and you’d get in trouble for this, right? This could change your whole life.’ It was that sort of grace and providing a second chance that helped me.

Cavalier Johnson:  I would imagine that when I got a second chance, that wasn’t the first second chance the store clerk gave to a young African American boy.  I don’t know if folks are past it. I know folks are tired by the situations we face in our city, quite frankly, the poverty that we see that then leads to those activities, the criminal activity that ultimately ends up hurting our society. I think they get that. I think they understand that. I think they really want to help.

Cavalier Johnson: What scares me the most is what I think scares every parent in Milwaukee. I don’t want my kids hurt because someone who shouldn’t have access to a gun in the first place gets that and decides to go shooting somewhere. Or stories like my wife has told me where she has gone to pick our son up from school and has our 3-year-old twin babies in the car and somebody is driving recklessly and playing chicken, driving directly towards her with my kids in the car. Those things are scary to me. I don’t want that for my family. I don’t want that for any family in Milwaukee. What excites me about Milwaukee is people love this city. They really, really do.  People are attached to Milwaukee, and they want to see this city do well, and to me, that’s the sort of place I want to raise my kids in.

Milwaukee mayoral candidate Bob Donovan; 1-on-1 ahead of April election

Mayoral candidates Cavalier Johnson and Bob Donovan participated in a debate on Monday, focusing on a broad range of challenges facing the city, including the future of the streetcar.

Milwaukee philanthropist and entrepreneur Mike Cudahy has passed away, Joel Brennan of the Greater Milwaukee Committee made the announcement at the Milwaukee mayoral debate on Monday afternoon, March 14.