WINTHROP, Mass.--Police are renewing their plea for the public to help identify a baby girl who was found on a Deer Island beach. 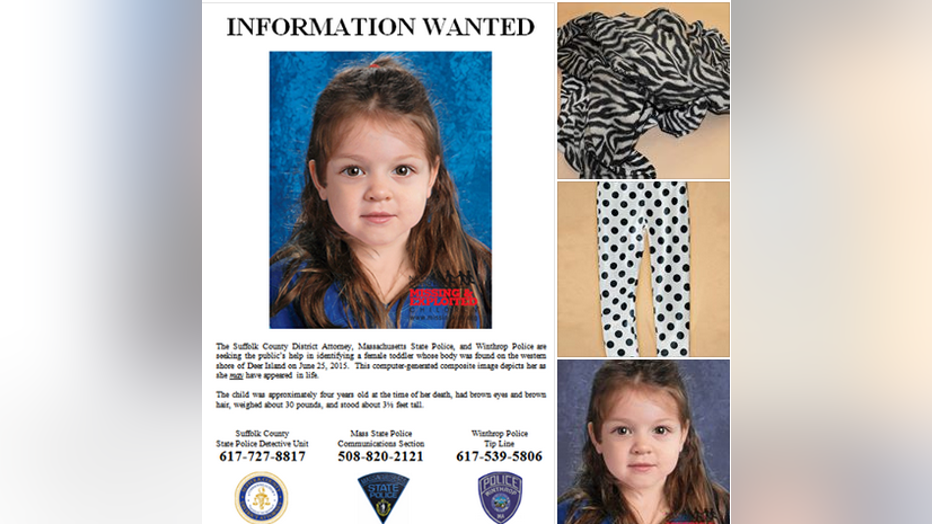 District Attorney Dan Conley spoke to the media today to update the public on the investigation into baby doe, who was found on June 25.

Since releasing the sketch of what the unidentified girl would have looked like, 45 million people have seen the picture on social media, Conley said, and dozens of tips have come in.

"If you are the parent or caregiver of this young girl, please step forward, clear your conscience," Conley said in a statement to the girl's parents, wherever they may be.

About 20 tips were credible enough to be investigated, but all of those girls were located and found to be safe.

Also, around a half dozen offers have come in to cover funeral costs for the little girl.

While police await toxicology results to determine how the girl died, Conley told reporters that investigators are still unsure if the body washed ashore or was placed there because her body was reasonably in tact and hadn't decayed much.

The girl was wearing just the polka dot leggings, and the zebra blanket was in a plastic bag next to her.

The girl is described as having brown hair and brown eyes, she weighed about 30 pounds and was about 3.5 feet tall, and she was about 4 years old at the time of her death.

Investigators have ruled out several missing girls that people have reported looked like baby doe, including Ayla Reynolds from Maine and Aliayah Lunsford from West Virginia. However, it is still unknown if the girl was local or not.