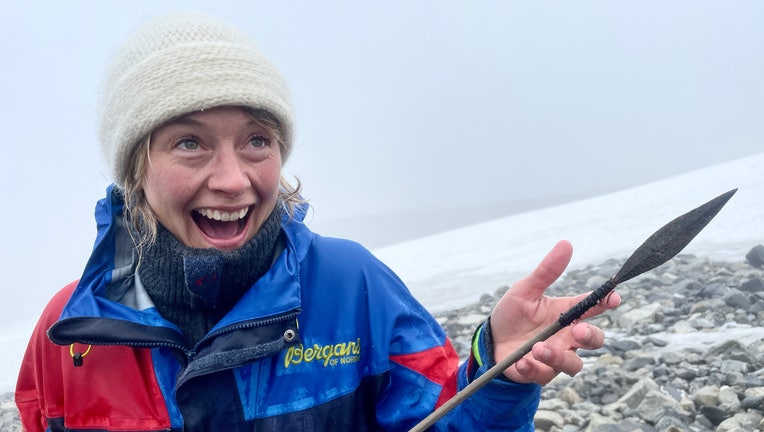 As climate change melts more and more ice around the globe, archaeologists are scouring mountaintops and finding ancient artifacts that have lived in a "prehistoric deep-freezer" for thousands of years.  Their latest find: an intact arrow used in the Early Viking Age some 1,500 years ago.

"Many of the artifacts that melt out are extremely well-preserved," explained Lars Holger Pilø, co-director for Secrets of the Ice in Norway.  "It is like they are frozen in time. Now the ice is retreating, the artifacts melt out, the clock starts ticking and it is a race against time to find and rescue these incredible objects before they are lost."

The arrow, which was used by early hunters, still had birch bark wrapped around the pointed tang of the arrowhead when it was found.

"The birch bark would originally have been wrapped around the sinew, which secured the arrowhead to the shaft," Secrets of the Ice archaeologists said.

Secrets of the Ice is part of an emerging field brought on by climate change. Since 2006, glacial archaeologists have uncovered thousands of artifacts from melting ice patches, including a 1,700-year-old sandal and 1,300-year-old wooden skis.

Glacial archaeology is happening in North America, the Alps, Mongolia and Norway, Pilø said. Most finds are discovered at ice patches, a type of glacier that doesn’t move.

"If the glaciers move, then the artifacts will be destroyed," Pilø said.

Secrets of the Ice works at the Department of Cultural Heritage of Innlandet County Council in Norway, the country where the largest concentration of artifacts are found. Their work began in 2006 when a big melt occurred, unearthing hundreds of archeological finds. The country has had a permanently funded glacier archaeology program since 2011.

"Each autumn, we head out to our high mountains to check for new sites, and survey on known sites," Pilø said.

The Viking Age arrow was found more than 6,500 feet above sea level in the Jotunheimen Mountains, where Secrets of the Ice has been working this year.

"We will continue working until winter snow arrives, normally by mid-September,"  Pilø said.