TAMPA, Fla. -- Pastor Rodney Howard-Browne has a weighty decision to make this Easter Sunday -- whether to open his church to the congregation.

Howard-Browne leads The River at Tampa Bay Church and recently discussed the choice on his Facebook page. But he may not have a choice after all.

Howard-Browne’s attorney said the church was dropped by their insurance after he was arrested for violating Hillsborough County’s Safer at Home order by holding services in an allegedly packed church.

But days later, Governor Ron DeSantis handed the pastor a huge win. After issuing two conflicting executive orders, DeSantis said church services were “essential” and religious institutions could be open to the public.

It also superseded any city or county orders in place. But there’s another twist in this confusing saga.

Politico reported the governor’s lead attorney told two mayors in South Florida, through email, that local orders can supersede the governor’s executive order, which is a complete contradiction of the written directive.

Hillsborough State Attorney Andrew Warren weighed in and said, “Unfortunately, I think the governor’s explanation is creating confusion, not solutions. We have to enforce the law based on how it’s actually written, not on how the governor wished that he had said, or thinks that he said.”

Warren has been critical of the governor's mixed messages.

“The confusion that the governor has created has made it harder for counties across the state to implement responsible social distancing,” Warren explained. 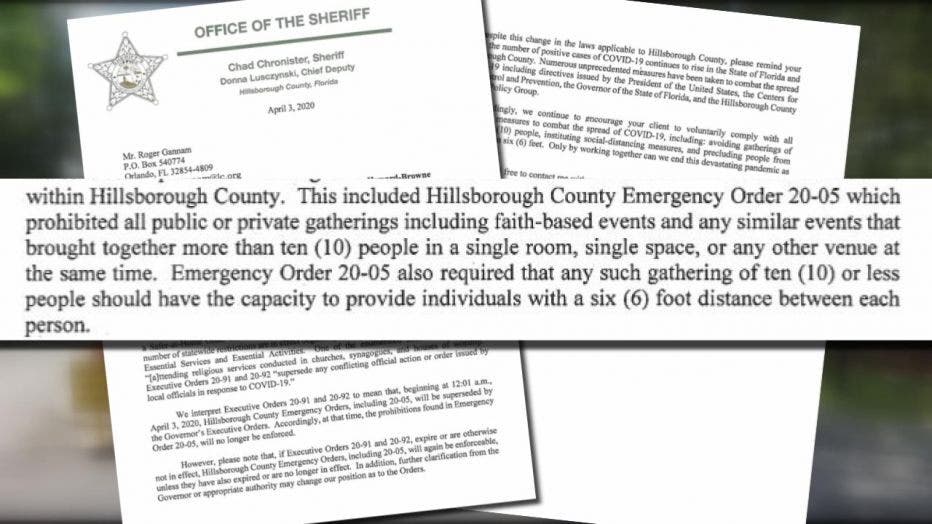 Hillsborough Sheriff Chad Chronister also appeared to be sticking with the governor’s written order. The sheriff’s attorney even sent a letter to the pastor’s attorney, encouraging Pastor Howard-Browne to practice “social distancing” with his congregation and to limit large gatherings.