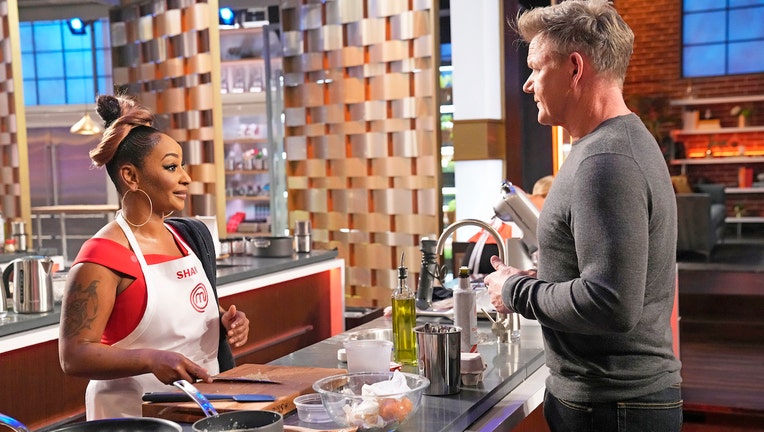 CHICAGO - Welcome back to "MasterChef" recaps! In episode 4, "The Dish That Sent You Home," the newly-crowned crop of 20 returning contestants face their greatest challenge yet: taking another shot at the dish that got them eliminated the first time. Miss a week? You can read our recaps and watch On Demand, on FOXNow, on Hulu and on Tubi, FOX’s free streaming service. This television station is owned by the FOX Corporation.

With the audition battles out of the way, "MasterChef: Back to Win" can start in earnest. 20 returning "MasterChef" and "MasterChef Junior" contestants cooked their way to new white aprons, but they’re all hungry for something more substantial: redemption. And with this first challenge, judges Gordon Ramsay, Joe Bastianich and Aarón Sánchez mean to give them that chance.

But first, as the chefs file into the MasterChef Kitchen and gaze up at the portraits of winners past, they have to revisit a highlight reel of sorts. Well, it’s more of a lowlight reel. 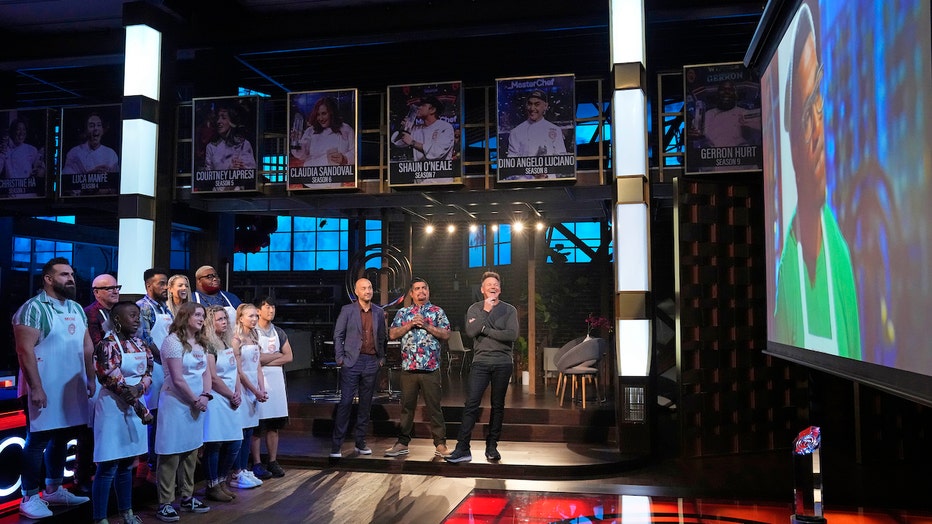 As the judges are always eager to remind our contestants, each of them has been here before, and when they left the first time, it wasn’t exactly in triumph. To really hammer that point home, the "MasterChef" powers-that-be lower a giant projector screen and let loose with a supercut of venomous feedback footage from the challenges that sent these 20 cooks home. There’s a lot embarrassed wincing from the contestants, but not from stalwart "MasterChef Junior" alumnus Shayne. This prompts his fellow contestants to bring back his "MCJ" season 5 nickname: Cue the gleeful shouts of "Shayne the Train!"

Now, from the ashes of defeat, these phoenixes get the chance to rise. Gordon, Aarón and Joe task them with their first challenge of the competition — to create a new and improved spin on the dish that sent them home!

WATCH FREE ON TUBI: Get stressed about risotto in Gordon Ramsay’s "Hell’s Kitchen" — get the app

"MasterChef: Back to Win": A real "Sliding Doors" situation 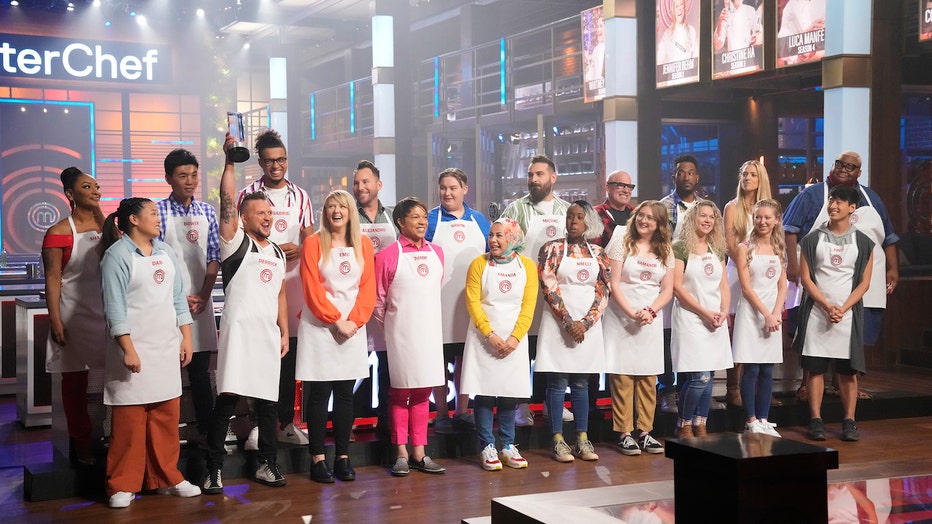 Things get even more interesting as a new spin on the season’s structure is announced. This season, the contestants won’t be making one dish to present to the three judges: they have to make one for each judge, and they must all be identical in taste and presentation. It’s an interesting change to the usual "MasterChef" formula: These folks are now experienced chefs who’ve already done one stint in the MC Kitchen, and the judges think it’s important to test not only the quality of the dishes, but the consistency of the cooks.

But there’s still one more twist in store: The winner of each challenge will receive an immunity pin they can use to save themselves from elimination in the next challenge.

WATCH FREE ON TUBI: Lidia Bastianich (Joe’s mom!) welcomes you to "Lidia’s Kitchen" — get the app

And with that, we’re off to the races! Attempting to track the progress of all 20 cooks and their 20 dishes into this recap would be a fool’s errand, but here are a few highlights:

"MasterChef Back to Win": I’m known for all the flavors! 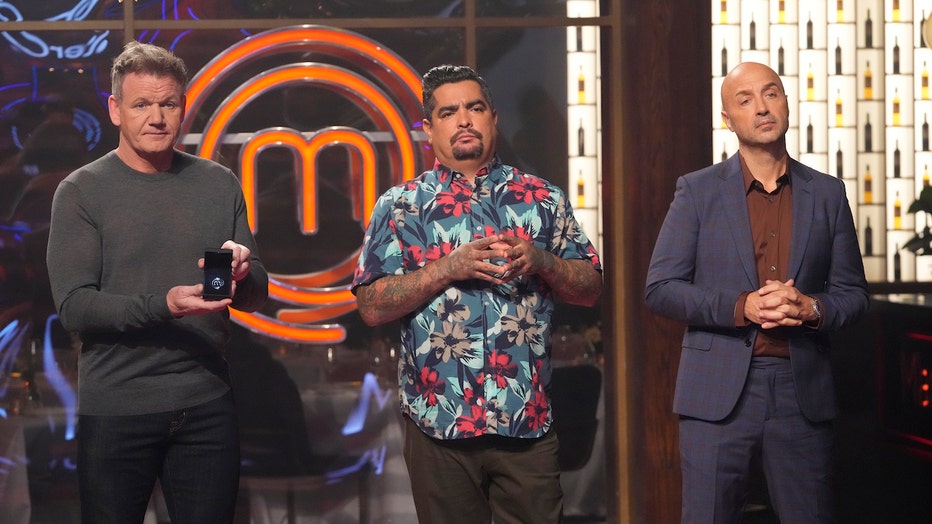 Some creative edits later, the challenge is done, and it’s time for the top and bottom threes. First, the tops: the judges begin with Willie, whose Cajun dumplings with spicy veggie broth shows off some good plating and, apparently, good flavors too. "That is redemption in a bowl right there," says Gordon.

Rounding out the top three are supposed nemeses Emily and Shanika, who put forth good efforts — though in this writer’s opinion, their dishes aren’t nearly as exciting as some of the dishes prepared by their competitors. Where’s Michael’s puffy taco? The cucumber-roll surf and turf we saw earlier from Bowen? This part really smells of the producers trying to mine the pair’s manufactured rivalry for drama, regardless of how accomplished Emily’s "deconstructed" Black Forest gateau and Shanika’s appetizing but unimaginatively plated egg yolk ravioli may be.

Emily gets the win, the pin and the first trip up to the balcony.

Satisfyingly, Shanika is super uninterested in playing up the Emily drama in her talking-head interviews: "I’m actually happy for [Emily], she deserves it." I’m really curious to see what steps the show might take in an attempt to force more juice into their dynamic, and how consciously they’ll fight back.

"MasterChef Back to Win": The chorizo crumbles 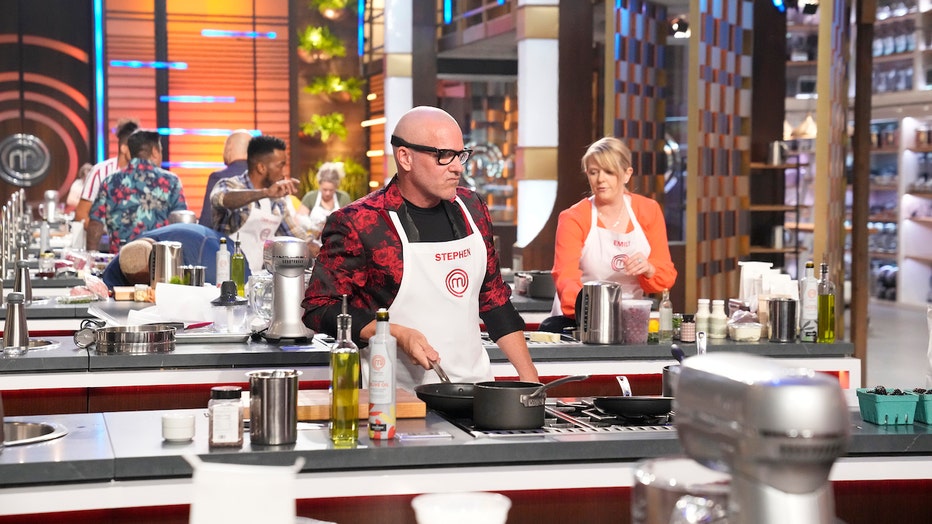 For every winner, there must be a loser, and the judges call up three of the night’s worst dishes. Gabriel’s sausage cannelloni looks a mess, his oval cast-iron pan containing some too-thick pasta that’s swimming in marinara sauce. "It looks like something you’d get at that restaurant that gives you free bread," Aarón notes. Ouch. Gabriel takes his licks, with an added twist of the knife from Joe about the literal investment the judges have made in him. He turns back, head bowed.

Then there’s Stephen, whose panna cotta never got past the chocolate-milk stage. "Not even good chocolate milk at that," Joe complains. In his season, Stephen was never in the bottom 3 (he was eliminated as a semifinalist), so this is particularly devastating for him.

Last is Tommy, whose chorizo-and-beef burger is far from uniform on his three plates. (Gordon’s plate is missing top buns!) Perhaps spent too much time forming his bizarre, celery stick/cherry tomato skewers designed to top the burgers, and that’s not even taking into account quail-egg skirt (huh?) he intended to drape over the top. What’s more, his ambitious idea of folding chorizo into the burger had a fatal flaw from the start: to get the pork chorizo fully cooked, you’ve got to cook the whole burger medium-well, so it’s a hockey puck before it gets to the table. My man needs to edit himself pronto.

Still, that miscalculation doesn’t hold a candle to Stephen’s complete failure to render his panna cotta, and so Stephen’s out the door in round one. He won’t be alone for long: The remaining chefs have already faced down their big "MasterChef" disasters, so who knows what surprises "MasterChef" has in store.

Dish of the Night

Big Willie's cajun dumplings looked so cool, with its black-squid-ink dumpling dough, the wide-set soup bowl plate, and a sumptuous, dark broth for it to bathe in. And the idea of the fusion dumpling just sounds so good, especially with the spice infused throughout.

Next time on "MasterChef"

The chefs take on a Vegas-themed mystery box challenge, with a surprise guest! 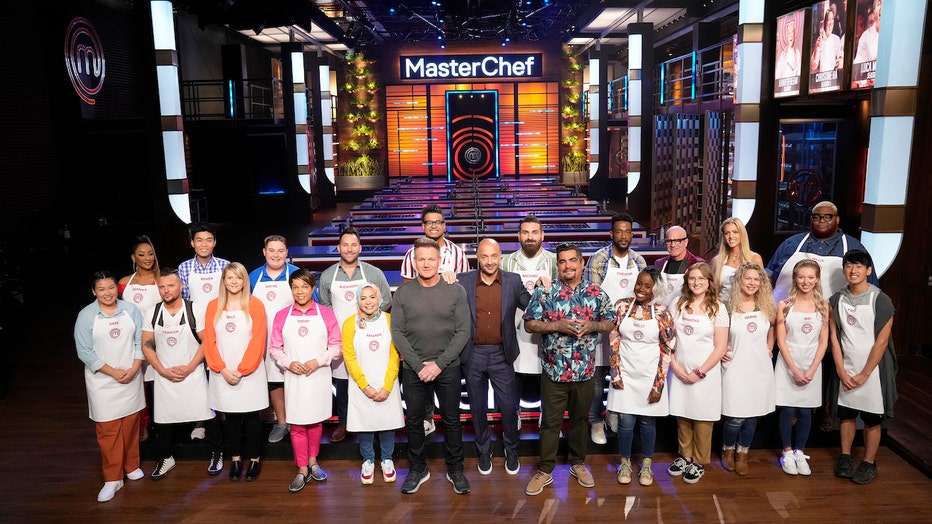 "MasterChef" airs Wednesdays at 8 p.m. EST on FOX. You can also watch On Demand or stream online via FOXNow.All 12 seasons of the show, including the first three episodes of the current season, are streaming on Hulu. And there’s a whole world of "MasterChef" streaming free on Tubi, including beloved series "MasterChef Junior" and several international editions.