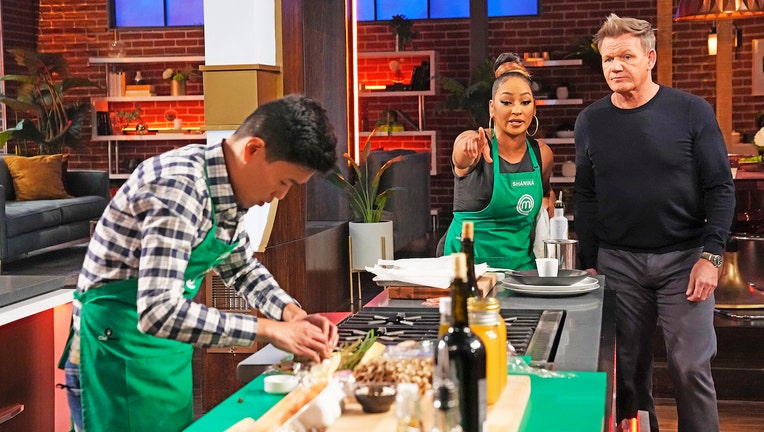 Chicago - Welcome back to "MasterChef" recaps! In tonight’s two-episode sprint, the chefs team up to nail Gordon’s signature dishes in "Tag Team" and elevate takeout with "GrubHub Challenge." So who makes it to the top ten? Let’s find out! Miss a week? You can read our recaps and watch On Demand, on FOXNow, on Hulu and on Tubi, FOX’s free streaming service. This television station is owned by the FOX Corporation.

With the season stretching into its third month, it’s time for the judges to start knocking off chefs like they’re Willy Wonka surveying some Golden Ticket winners — that means "MasterChef: Back to Win" is in double-episode mode for a few weeks! Expect a few more immunity pins and, more importantly, double the usual number of aprons being placed gingerly atop their stations.

"MasterChef: Back to Win" recap: Back to back (to win) 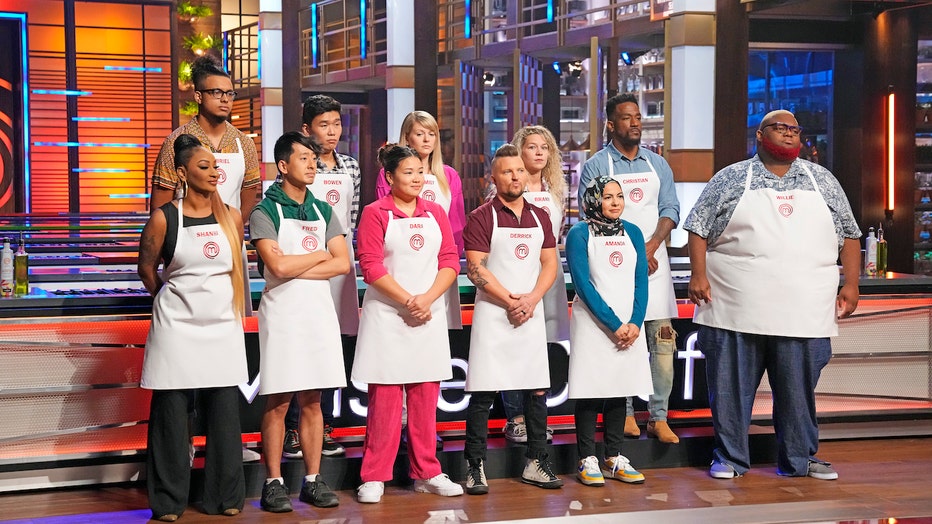 First up is "Tag Team," an episode that’s exactly what it says on the tin: a tag-team challenge, which Gordon Ramsay says is his favorite. (We know you’re lying, Gordon; you don’t get to throw food at birds in tag-team challenges.) This time around, the challenge is a daunting one: the paired-off chefs must perfectly recreate three of Ramsay’s signature dishes in a scant 75 minutes. Those dishes? A creamy mushroom risotto, a complex Beef Wellington, and a luscious pear tarte Tatin.

The remaining 12 chefs break off into their respective pairs: Bowen with Shanika, Derrick with Michael (who won immunity last week, but must still compete), Christian with Brandi, Willie with Amanda, Dara with Fred and Gabriel with Emily. They’re immediately off to the races, each member swapping out every 10 minutes, while the chef not cooking shouts orders to their partner working on station. 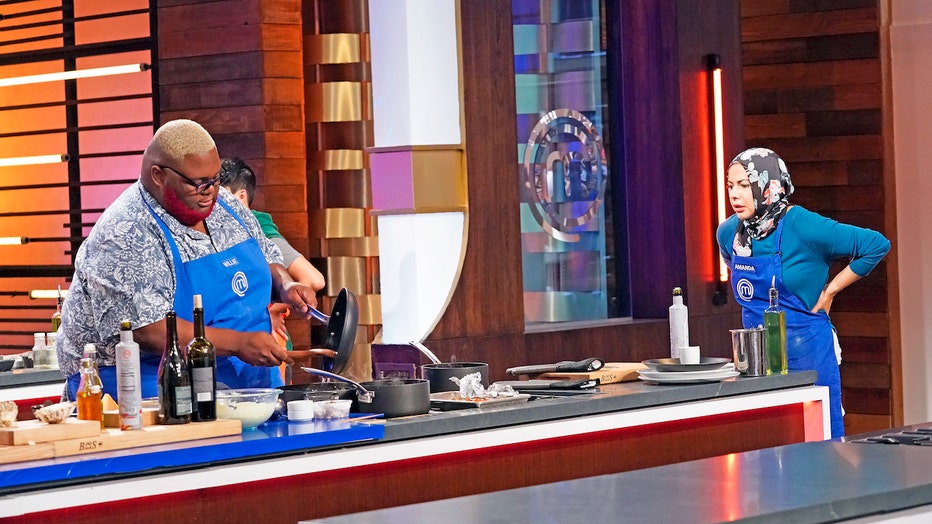 Some chefs handle it smoothly; Derrick and Michael egg each other on like supportive bros, while Christian and Brandi defy expectations (they’re both loud, strong personalities) by being surprisingly sympatico. Other teams are less successful. Willie and Amanda feel adrift, while Fred tries in vain to talk a panicking Dara through the difficult process of rolling and placing the delicate lattice pastry atop their Wellington. Shanika and Bowen seem the most chaotic, the former shouting at the latter with greater urgency (When Bowen singes his finger on a hot pan, Shanika barks, "F— that, a burn is a burn!")

Still, the teams all finish in time for judging. Willie and Amanda’s risotto is disappointing, and their Wellington looks like a loaf of bread, but the dessert’s delicious. Michael and Derrick put out a strong showing, with spot-on latticing for the Wellington and a Tarte Tatin about which Aarón Sánchez is "super jazzed". Dara and Fred’s risotto is undersalted; neither of them tasted the stock as they cooked, which Joe Bastianich balks at. Their sloppy Wellington lattice makes it look like a turtle, but it’s well-seasoned; the tarte has raw pastry and liquidy, pale pears.

Brandi and Christian’s risotto is rich and flavorful (Bastianich: "It tastes like the risotto from my mother’s house"), but their tarte is sloppy and undercooked. Everyone’s Wellington pastry is raw; no one rolled it thin enough. Bowen and Shanika, for all their bickering, turn out the best dishes of the night; Bastianich can’t stop eating their risotto, and the Wellington is closest to how Chef Gordon would present it. Sánchez describes their tarte as a "kaleidoscope of caramel fruit," and the pears do look elegantly layered. They win the challenge, and both get immunity pins for next week. 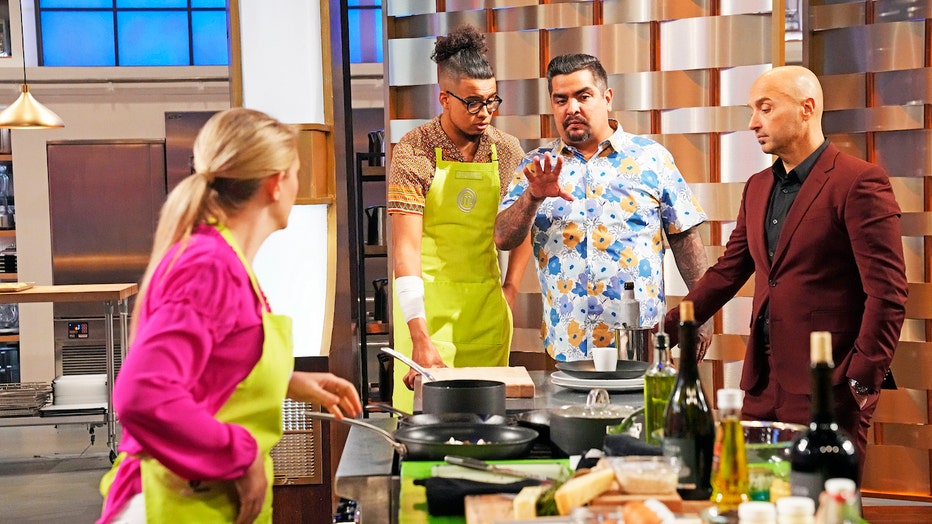 Emily and Gabriel, sadly, have the worst showing of the night. The risotto is undersalted and "feels ignored," according to Sánchez. The Wellington looks stubby and wide, and the meat is cooked more on the medium side. With the tarte also unbalanced and undercooked, that’s enough to make them the bottom two. Emily’s more assertive presence in the kitchen gives her the edge, so poor Gabriel is eliminated. It’s a bittersweet moment, especially considering Gordon paid for Gabriel’s culinary school after his inaugural season.

"MasterChef: Back to Win" recap: Takeout the competition 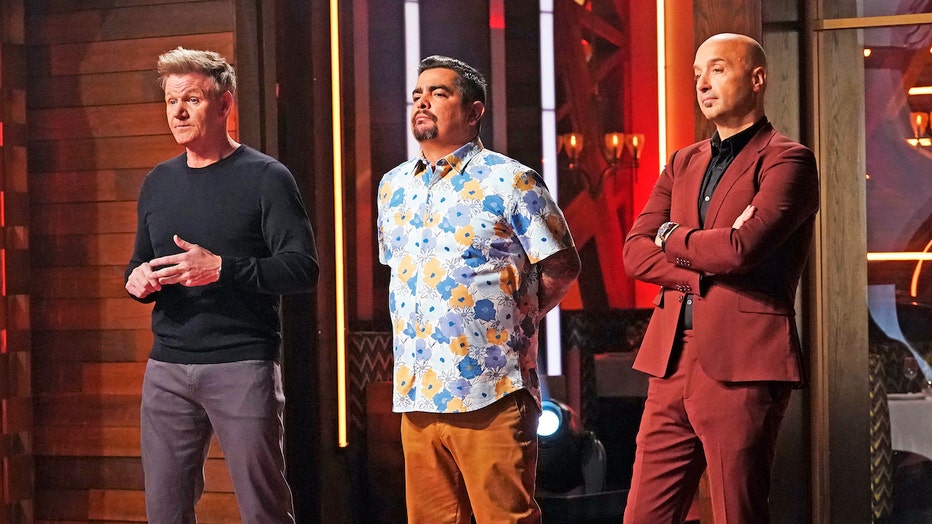 In "GrubHub Challenge," the show takes a moment to shill for their new GrubHub-specific restaurant, MasterChef Table, by having the nine remaining competing chefs (Bowen and Shanika’s tag-team win means they sit this one out) pick popular takeout items and put a gourmet spin on them. What’s more, they only have 45 minutes to get it done!

After a grueling but uneventful cook, the judges pick three dishes to inspect more closely. First up is Michael, who picked ramen and turned it into a Korean-style ramyun with grilled BBQ shrimp. Bastianich calls it "elevated" while Sánchez cheers the clever presentation (it does look gorgeous, with glass noodles sitting atop a wide plate you pour the spicy broth over). It’s a bit hot for Bastianich; he’s coughing a lot, but Sánchez says the broth is "award-winning stuff."

Next is Dara, who kept it traditional with her Indian butter chicken with spicy basmati rice, garlic butter chapati and cucumber-mint raita. She chose to elevate what was already there rather than reinvent it, and the gambit paid off; Ramsay celebrates the "magical sauce" and spicy rice while Sánchez compliments her bold approach.

The third pick is such a gamble that Ramsay specifies that, if the dish doesn’t end up working, he’s going in the bottom: Derrick’s. You see, he saw empanadas and thought, "I’ll make a lobster en croute (meaning it’s baked in pastry crust) with an aji amarillo hollandaise and grilled vegetables." It’s a huge swing, but one typical of Derrick's approach all season: "You cook every time like you’re in the finale," Ramsay chuckles. It works out, too; the lobster’s perfectly cooked, and the hollandaise is "impeccable." And after a season of near-wins, Derrick finally gets his immunity pin. 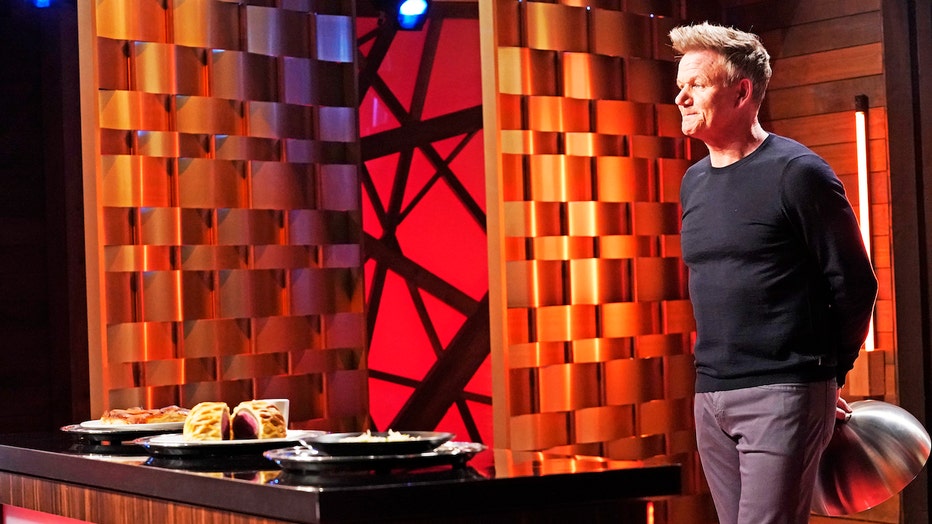 Since Derrick’s dish worked out, the judges call only two folks to the bottom field. First is Fred, who got spaghetti and meatballs and decided to make, of all things, a Mediterranean-inspired meatball-stuffed potsticker? It’s a wild trip, and it doesn’t work for the judges, especially given the sloppy plating he gives it (rare for Fred). It’s just baffling to behold, with a harissa paste that broke on the plate, and unseasoned, dry meat in the middle of a gummy potsticker. Bastianich likens it to bad leftover Chinese that’s been left out for a couple days.

The other chef in the bottom is poor Big Willie, whose stylish glasses didn’t save him from criticism this time. He turned fried rice and orange chicken into a chicken and rice meatball with apricot-plum sauce and charred vegetables, a dish Bastianich calls "perplexing." The meatball is dry, and the conception is confusing. Neither Samsay nor Sánchez know what to make of it.

WATCH FREE ON TUBI: Lidia Bastianich (Joe’s mom!) welcomes you to "Lidia’s Kitchen" — get the app

Still, a poorly-executed but somewhat sensical dish beats out the unappetizing wild swing, and Fred is eliminated. (Perhaps he lost his mojo after best friend Bri’s elimination last week?) Nevertheless, he takes it in stride, and with no small amount of flair, he lays his apron on his station and garnishes it with herbs before departing.

I just can’t get over Derrick’s lobster en croute — the lobster looked glistening and delicious, and I’m desperate to try that hollandaise. It’s a real elevation of Derrick’s usual stuff, and you can see that hunger to win on the plate.

Next time on "MasterChef: Back to Win"

The chefs elevate gas station snacks, and someone combines beer with gummi bears.

"MasterChef" airs Wednesdays at 8 p.m. EST on FOX. You can also watch On Demand or stream online via FOXNow.All 12 seasons of the show, including the first six episodes of the current season, are streaming on Hulu. And there’s a whole world of "MasterChef" streaming free on Tubi, including beloved series "MasterChef Junior" and several international editions.