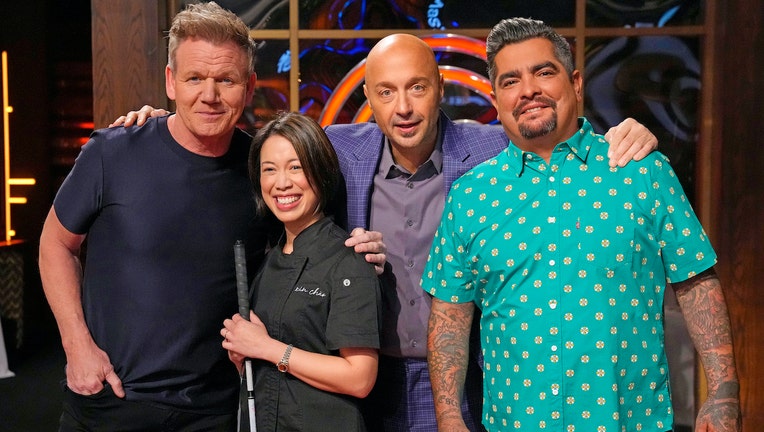 Chicago - Welcome back to "MasterChef" recaps! In episode 11, "Winners Mystery Box — Christine Ha," the chefs follow in the footsteps of a "MasterChef" legend and some nearly fall off a cliff. Miss a week? You can read our recaps and watch On Demand, on FOXNow, on Hulu and on Tubi, FOX’s free streaming service. This television station is owned by the FOX Corporation.

What began as a group of 20 chefs has been whittled down to the oh-so-lucky number of 13 — "MasterChef: Back to Win" has not held back this season. And in keeping with the season’s overall theme — returning chefs vying for that MasterChef trophy they missed last time — another "MasterChef" winner drops by to lead by example: Season 3 winner Christine Ha, the blind chef who’s since made a career of showcasing her Vietnamese-American heritage at restaurants like The Blind Goat and Houston’s Xin Chao.

Christine’s arrival is emotional, especially for Dara and Amanda, who practically (and in Amanda’s case, literally) burst into tears when they see her.

Unlike most mystery box challenges, Ha stipulates that each chef must use all 11 ingredients in their dish, with no exceptions. Oh, and they only have 60 minutes. Easy!

"MasterChef: Back to Win" recap: The lemongrass is always greener 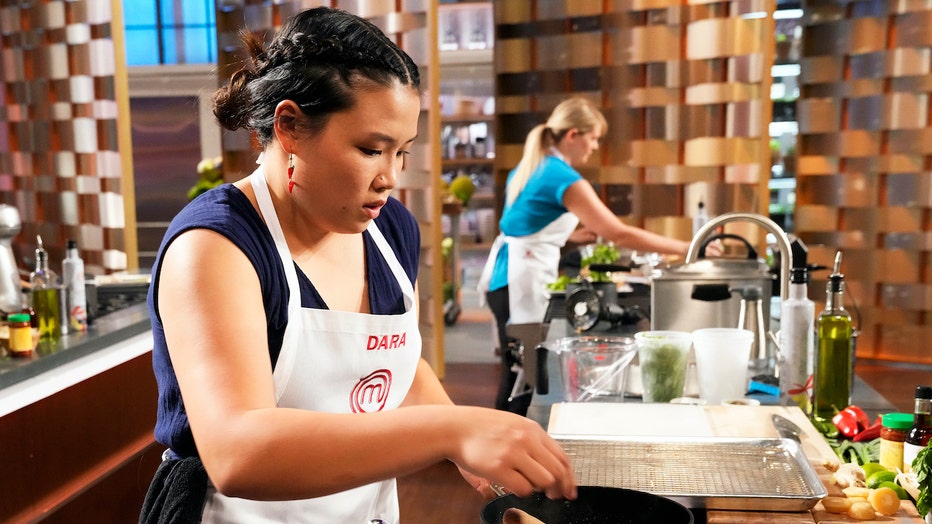 The chefs get to work, dashing to the pantry to make the most of their time. ("They are so pumped to have you, Chef," Aarón Sanchez tells Christina; she’s delighted to be back in the MasterChef Kitchen.)

Some chefs are taking real chances, both in terms of their comfort zone and timeframe. Amanda and Christian, for instance, are making pho, that classic Vietnamese soup known for its flavorful broth that normally takes days to develop. With the help of pressure cookers and a little prayer, they’re shooting for that level of flavor in an hour. Christine’s not convinced.

Dara’s in chef heaven since these flavors are second nature to her: heck, she’s even wearing adorable chili-pepper earrings for the occasion! Compare that to Emily, who’s making lemongrass pork inspired by her time in New Orleans but doesn’t know what to do with the jalapenos in her basket. "I’m not a spicy person," Emily says.

As expected for a 60-minute cook with this many ingredients, the kitchen heats up fast. Brandi, who’s working on a Vietnamese sticky pork belly, is dismayed to learn that she accidentally kept her pressure cooker bottom on the burner, scorching the bottom of the pan and destroying the crispy skin on her pork belly. She’ll just have to trim it and hope it doesn’t taste burnt.

But the real pressure cooker moment comes in the final minutes of the challenge, as Michael is committed to leaving the lid on his pressure cooker on until the very last second to make sure his braised beef has as much chance to get tender as possible. Does it work? He beams in relief as he touches the beef and cries out, "It’s soft!"

"MasterChef: Back to Win" recap: Battle of the pho 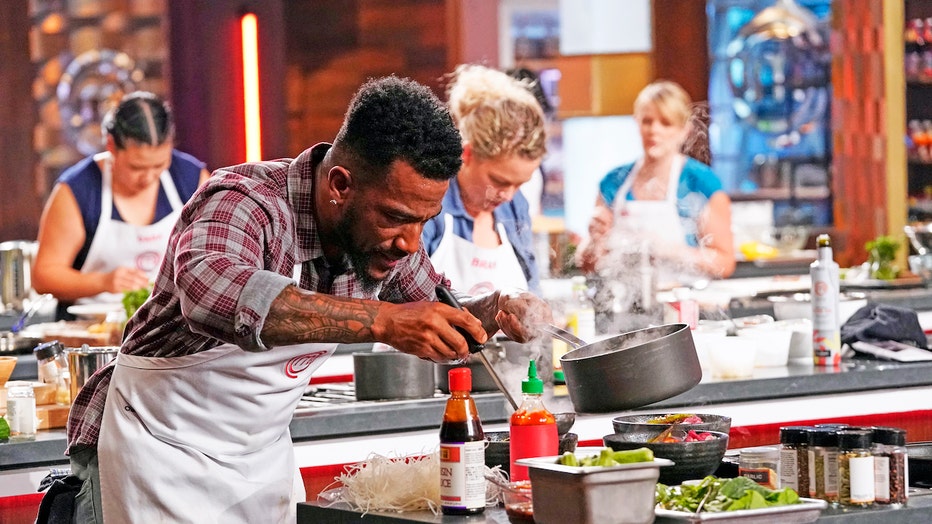 With the cook complete, the chefs make their rounds with their usual stone-faced seriousness (Gordon Ramsay escorting Christine from station to station like a proper gentleman). They’re none too impressed with the burnt pot on Brandi’s station, and Joe Bastianich coughs at the amount of spice Bowen’s put in his dish. Dara muses in her talking-head interviews that she’s worried about her other competitors, since she doesn’t know if they’ve used these ingredients before.

But eventually, the judges circle back and settle on their top three, starting with Michael! The hard work and patience on that beef short rib stew worked out; as Aarón notes, the beef "sings in your palette," and Joe calls the flavors "profound." Christine says she almost likes the crab, pork and mushroom spring roll he plated alongside even more than the stew itself. "There’s something dangerous and exciting about the way you cook," Gordon says. "But watch that star anise."

Next is Christian, whose vegetable and beef pho (with roasted okra, naturally, for that New Orleans flair) is a knockout. It’s elegantly plated, which Joe appreciates: "It looks like something out of a food magazine." Christine applauds the personal touches he added to the dish, and Gordon calls it punchy and bold. Aarón, in the line of the night, tells him to "pump the brakes on the noodle," though; there’s just too much.

Finally, Dara gets her chance to impress her idol, presenting a rice porridge with seared duck breast, sautéed morning glory and mung beans. It’s a simple, homey Vietnamese dish, elevated by European, Michelin-star treatment — and that praise comes from both Joe and Christine. Aarón is shocked that she got all this flavor done in an hour.

Still, it just can’t beat the succulence of Michael’s braised beef, which earns him the win and the immunity pin. He’s over the moon to get his first win in the competition — and Christian even stops him on the way to the winner’s balcony to tell him, "You deserved that, brother."

"MasterChef: Back to Win" recap: Long live the plating queen 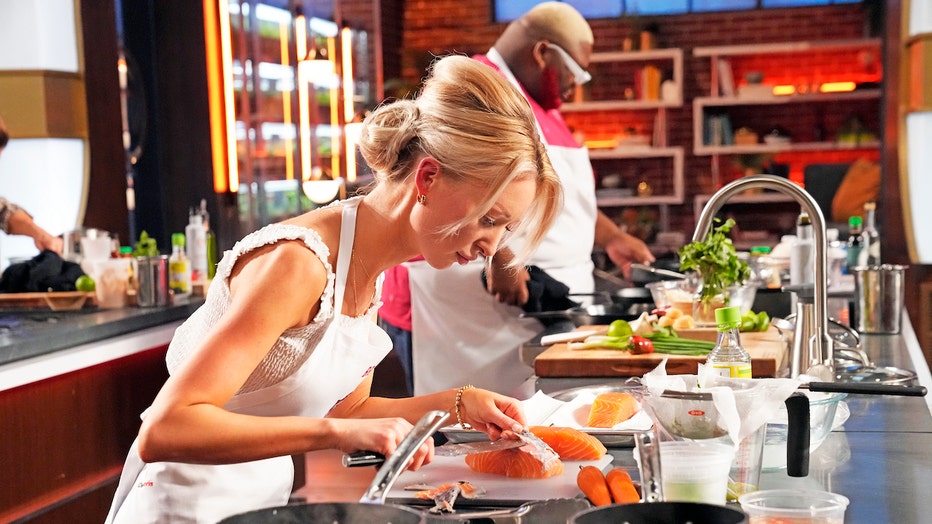 We move on to the bottom three. First up, sadly, is Bri, who’s pinballed from being in the danger zone two weeks ago to serving as the winning team's leader last week. Unfortunately, her pan-seared salmon with fish-sauce caramel glaze, stir-fried noodles and a thick coconut-lime sauce is a disaster.

For one thing, it feels unfinished and unexciting; Christine calls it "boring." Joe makes a point of lifting the salmon to reveal that the rest of the dish looks like a splattered mess of noodles and sauce. "It has no passion," Aarón complains, and that coconut cream sauce was a huge misstep in terms of flavor. "It’s like eating suntan lotion," Joe mutters after Bri walks away.

Next is Brandi, whose sticky pork belly did manage to survive the pressure cooker and even tastes nice (after she cut the burnt part off). The problem is that the rest of her dish "looks like a bowl full of raw ingredients" on the plate, as Joe puts it: a raw vegetable salad with one cooked component on top.

Then there’s Emily; it’s her first time ever in the bottom three. But she deserves it this time since her lemongrass pork just looks like it’s been plopped on a small bed of veg with a rice crisp on top. "This dish lacks three things you have in spades," Joe explains: love, intelligence and strategy.

Still, it’s enough to save her from elimination since Bri’s massive missteps on her dish get her the boot. It’s a shocking knockdown for an otherwise incredible competitor this season (and Fred, her bestie, is visibly upset that she has to go). But Gordon assures her that she’ll always be MasterChef’s "Plating Queen," leading to a tearful goodbye.

It’s also a reminder to the chefs left behind that, even if you can make your food look good, you have to make it taste good and respect the cultural origins of the cuisine you’re working with.

While any of the top three dishes would make a happy home in my stomach (Christian’s plating was next level on his pho), I would have loved to have given a closer look at Derrick’s shrimp banh mi. It looked like it was plated with finesse, and the shrimp had a brilliant color on them.

Next time on "MasterChef: Back to Win"

We get our first tag-team challenge of the season, as the chefs work to replicate three elegant dishes from Gordon Ramsay’s restaurants. Bland beef Wellingtons and lots of shouting? Sign me up!

"MasterChef" airs Wednesdays at 8 p.m. EST on FOX. You can also watch On Demand or stream online via FOXNow.All 12 seasons of the show, including the first six episodes of the current season, are streaming on Hulu. And there’s a whole world of "MasterChef" streaming free on Tubi, including beloved series "MasterChef Junior" and several international editions.