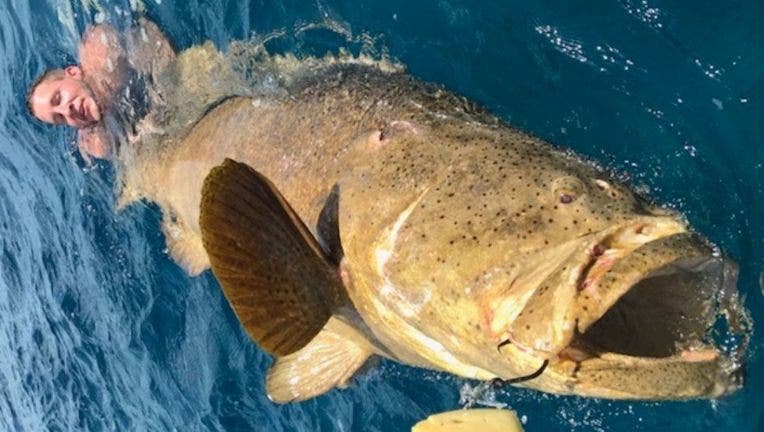 Chancey told Fox News that this was the first time he saw two men get pulled into the water by the same fish. Weighing in at 450 pounds, the captain described it as an “upper echelon” catch.

CAPE CORAL, Fla. - Some fish really know how to put up a fight.

A birthday fishing trip in Cape Coral, Fla., resulted in an angler not just reeling in a possible catch-of-a-lifetime, but also a really great story. Unfortunately, the struggle did leave the two men soaking wet.

Fox News spoke with Ben Chancey, a captain with Chew On This Charters, who was hired to take a group on a surprise fishing trip. Mike, who was celebrating his 30th birthday, had been told he was going on a manatee sightseeing trip. The trip had been planned by Eric, a soldier who fought in Afganistan, and his girlfriend Jenny, a registered nurse.

According to Chancey, Mike hooked a massive grouper fish that had been spotted in “ultra-clear” water. According to the captain, Mike appeared to be doing a good job with the fish, so Chancey let him try to reel it in on his own.

“After about 10 seconds of fighting the giant fish on his own he was pulled down to the gunnel and was lifted overboard by the giant fish,” Chancey said. “When he went over he grabbed the side of the boat and then had the rod pulled out of his hand. The rod was lost.”

Amazingly, Jenny spotted the rod about 20 minutes later “on the bottom in the crystal clear 40-foot-deep water.” They initially planned on swimming down to grab the rod, but they lucked out and hooked it with the boat’s anchor. They then noticed that the grouper was still attached to the line.

Footage from the trip was uploaded to the Chew On This Youtube channel.

“We transferred the rod to Eric so Mike could jump in and get a great pic with his catch,” Chancey explained. “While Eric was holding the rod the fish made a mad dash for the bottom again launching Eric overboard with the rod and reel. Eric eventually released the lever drag while hanging on the side of the boat so I could get the rod from him. I took the rod and re-landed the Goliath Grouper while Eric threw his phone and keys in the boat because they were wet from him being pulled overboard.”

Chancey told Fox News that this was the first time he saw two men get pulled into the water by the same fish. Weighing in at 450 pounds, the captain described it as an “upper echelon” catch. According to him, when the group pulled the massive fish in, several boats had gathered around to watch and offered a round of applause.