CHRISTCHURCH, New Zealand — At least 49 people were killed in mass shootings at two mosques full of worshippers attending Friday prayers on what the prime minister called "one of New Zealand's darkest days."

One man was arrested and charged with murder in what appeared to be a carefully planned racist attack. Police also defused explosive devices in a car.

Two other armed suspects were being held in custody. Police said they were trying to determine how they might be involved.

Prime Minister Jacinda Ardern said the events in Christchurch represented "an extraordinary and unprecedented act of violence," and that many of the victims could be migrants or refugees.

"It is clear that this can now only be described as a terrorist attack," Ardern said.

In addition to the dead, health officials said 48 people were being treated at Christchurch Hospital for gunshot wounds. Injuries ranged from minor to critical.

Police took three men and a woman into custody after the shootings, which shocked people across the nation of 5 million people. Police later said one of the arrests didn't relate to the shootings. 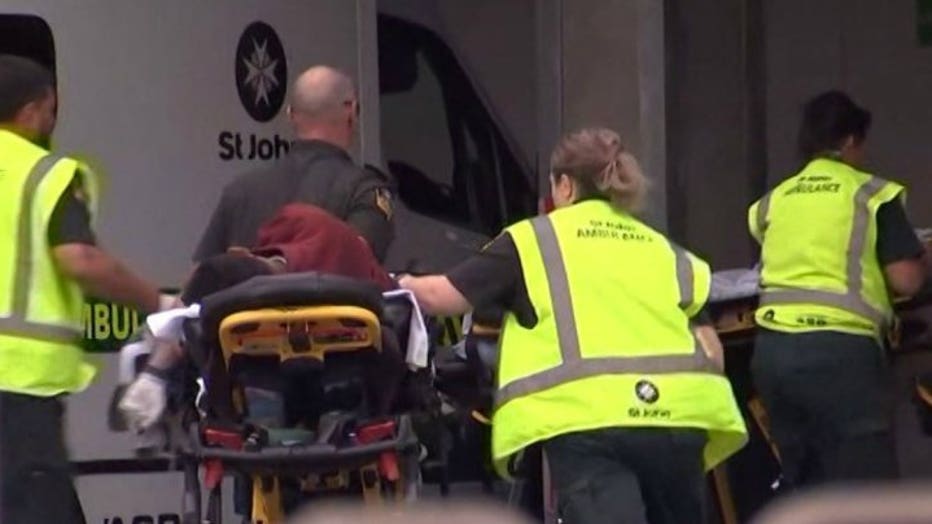 While there was no reason to believe there were any more suspects, Ardern said the national security threat level was being raised from low to high, the second-highest level.

National carrier Air New Zealand canceled at least 17 flights in and out of Christchurch, saying it couldn't properly screen customers and their baggage following the shootings. 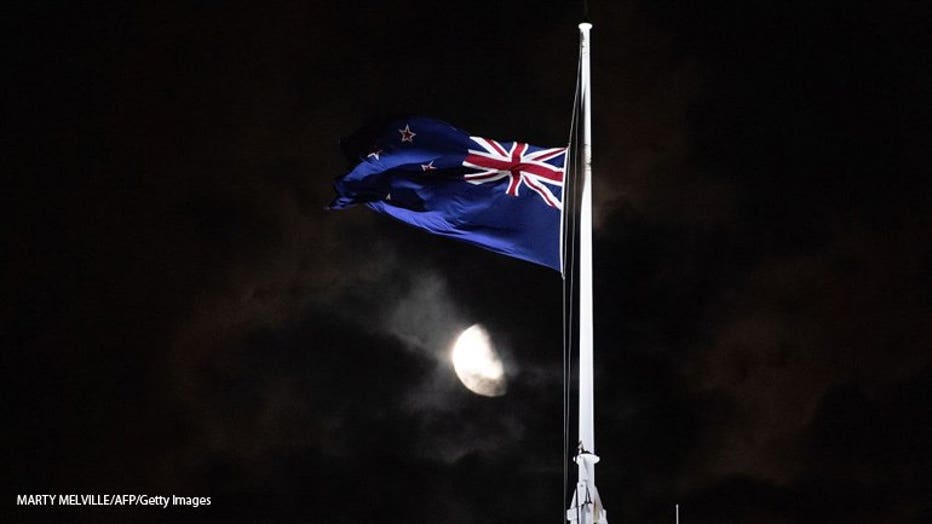 The New Zealand national flag is flown at half-mast on a Parliament building in Wellington on March 15, 2019, after a shooting incident in Christchurch. - Attacks on two Christchurch mosques left at least 49 dead on March 15, with one gunman -- ident

Police said the investigation had extended 360 kilometers (240 miles) to the south, where homes in Dunedin were evacuated around a "location of interest." A police statement gave no further detail of how it might be linked to the attacks.

Authorities have not specified who they detained, but said none had been on any watch list. A man who claimed responsibility for the shootings left a 74-page anti-immigrant manifesto in which he explained who he was and his reasoning for the attack. He said he was a 28-year-old white Australian and a racist.

Australian Prime Minister Scott Morrison confirmed that one of the people detained was an Australian-born citizen. 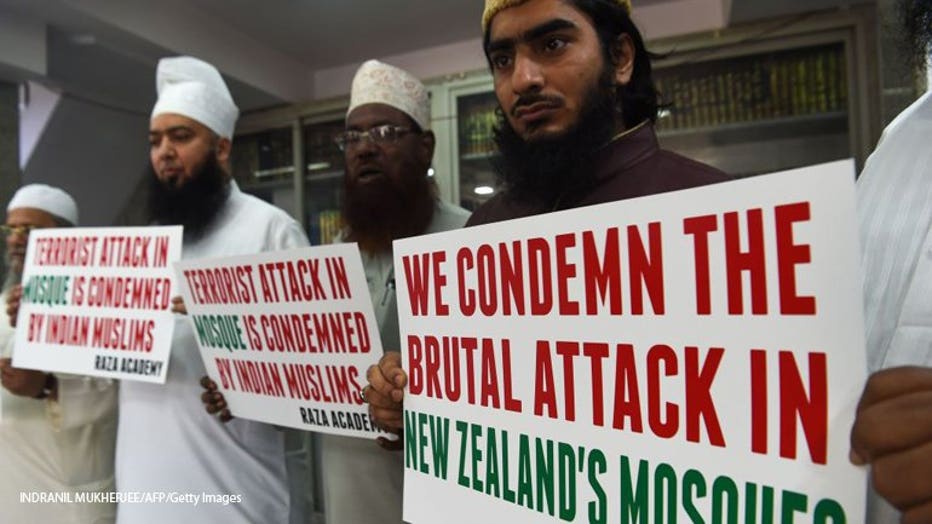 Indian Muslims and clerics hold posters to condemn the mass shooting that occured at multiple mosques in New Zealand city of Christchurch, during an Islamic seminary in Mumbai on March 14, 2019. - A 'right-wing extremist' armed with semi-automatic we

Police Commissioner Mike Bush said Friday night that a man had been charged with murder. He did not say whether police believed the same shooter was responsible for both attacks.

Ardern alluded at a news conference to anti-immigrant sentiment as the possible motive, saying that while many people affected by the shootings may be migrants or refugees, "they have chosen to make New Zealand their home, and it is their home. They are us."

As for the suspects, Ardern said, "these are people who I would describe as having extremist views that have absolutely no place in New Zealand."

Bush said police had found two improvised explosive devices in one car, a clarification from an earlier statement that there were devices in multiple vehicles. He said they had disabled one and were in the process of disabling the second.

The deadliest attack occurred at the Al Noor mosque in central Christchurch at about 1:45 p.m., when 41 people were killed.

Witness Len Peneha said he saw a man dressed in black enter the mosque and then heard dozens of shots, followed by people running from the mosque in terror.

Peneha, who lives next door to the mosque, said the gunman ran out of the mosque, dropped what appeared to be a semi-automatic weapon in his driveway, and fled. He said he then went into the mosque to try to help.

"I saw dead people everywhere. There were three in the hallway, at the door leading into the mosque, and people inside the mosque," he said. "I don't understand how anyone could do this to these people, to anyone. It's ridiculous."

He said he helped about five people recover in his home. He said one was slightly injured.

"I've lived next door to this mosque for about five years and the people are great, they're very friendly," he said. "I just don't understand it."

He said the gunman was white and was wearing a helmet with some kind of device on top, giving him a military-type appearance.

A video that was apparently livestreamed by the shooter shows the attack in horrifying detail. The gunman spends more than two minutes inside the mosque spraying terrified worshippers with bullets again and again, sometimes re-firing at people he has already cut down.

He then walks outside to the street, where he shoots at people on the sidewalk. Children's screams can be heard in the distance as he returns to his car to get another rifle.

The gunman then walks back into the mosque, where there are at least two dozen people lying on the ground. After walking back outside and shooting a woman there, he gets back in his car, where the song "Fire" by English rock band "The Crazy World of Arthur Brown" can be heard blasting from the speakers. The singer bellows, "I am the god of hellfire!" and the gunman drives away. The video then cuts out.

During a second shooting at the Linwood mosque about 5 kilometers (3 miles) from the Al Noor mosque, seven people were killed.

Mark Nichols told the New Zealand Herald he heard about five gunshots and that a Friday prayer-goer returned fire with a rifle or shotgun.

Nichols said he saw two injured people being carried out on stretchers past his automotive shop and that both people appeared to be alive.

The police commissioner warned anybody who was thinking of going to a mosque anywhere in New Zealand on Friday to stay put.

The man who claimed responsibility for the shooting said he came to New Zealand only to plan and train for the attack. He said he was not a member of any organization, but had donated to and interacted with many nationalist groups, though he acted alone and no group ordered the attack.

He said the mosques in Christchurch and Linwood would be the targets, as would a third mosque in the town of Ashburton if he could make it there.

He said he chose New Zealand because of its location, to show that even the most remote parts of the world were not free of "mass immigration."

New Zealand is generally considered to be a welcoming country for migrants and refugees. Last year, the prime minister announced the country would boost its annual refugee quota from 1,000 to 1,500 starting in 2020. Ardern, whose party campaigned on the promise of raising the intake of refugees, called the planned increase "the right thing to do."

David Meates, the chief executive of the Canterbury District Health Board, said 12 operating theaters were being used at Christchurch Hospital to treat the injured and that some patients would need multiple surgeries. He said about 200 family members were at the hospital awaiting news of their loved ones.

Home to nearly 400,000 people, Christchurch is the largest city on New Zealand's South Island. Sometimes called the garden city, it has been rebuilding since an earthquake in 2011 killed 185 people and destroyed many downtown buildings.

A cricket match between New Zealand and Bangladesh scheduled to start Saturday was canceled after the Bangladesh cricket team had a narrow escape.

Players and members of the team's coaching staff were reportedly on their bus, approaching the Masjid Al Noor mosque in Hagley Park when the shooting broke out.

Batsman Tamim Iqbal tweeted "entire team got saved from active shooters. Frightening experience and please keep us in your prayers."

Mass shootings in New Zealand are rare. Before Friday's attack, the deadliest shooting in modern history occurred in the small town of Aramoana in 1990, when gunman David Gray shot and killed 13 people following a dispute with a neighbor.