RACINE COUNTY -- A 20-year-old Racine man has been criminally charged after a City of Racine sanitation worker died after he was hit by a car on Wednesday, December 14th.

Benjamin Bell faces one count of homicide by negligent operation of a vehicle and one count of first degree recklessly endangering safety. 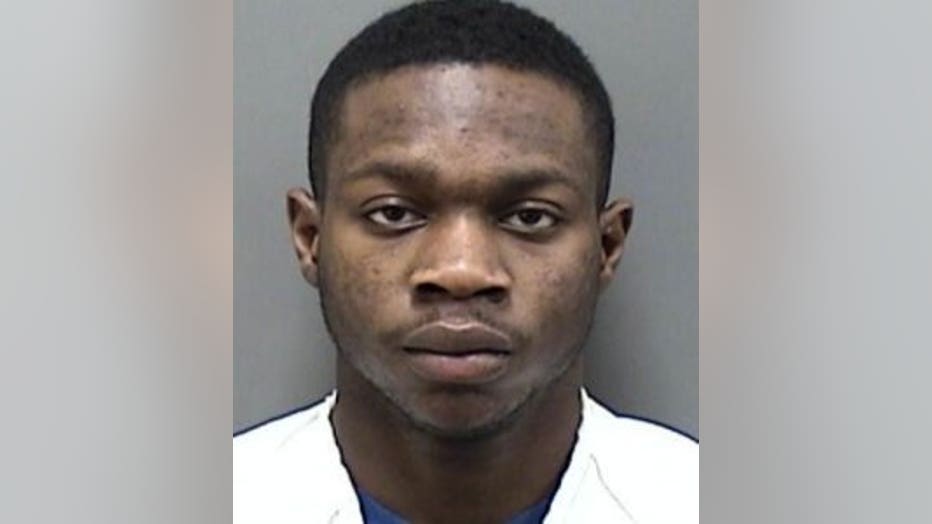 The crash happened near Washington and Oregon in Racine. A silver Mustang crashed into the back end of a Racine DPW garbage truck parked in the right lane with its safety flashers activated. A recycling bin was loaded on the mechanical apparatus to dump the recycling bin into the truck.

The criminal complaint indicates Mark Gates, a City of Racine sanitation worker and beloved pastor was found pinned between the front end of the Mustang and the back of the garbage truck. Gates was taken to the hospital via Flight for Life -- where he died around 3:15 p.m. Wednesday.

The complaint states Benjamin Bell was driving the Mustang. Skid/tire marks were found beginning just west of Indiana Street and extending west to the intersection of Oregon/Washington. Just west of Oregon Street, the complaint indicates the right wheels of the Mustang mounted the piled snow along the north curb line and rode on the snow until it impacted the garbage truck.

An officer noted an odor of marijuana coming from the Mustang after the crash, according to the complaint. 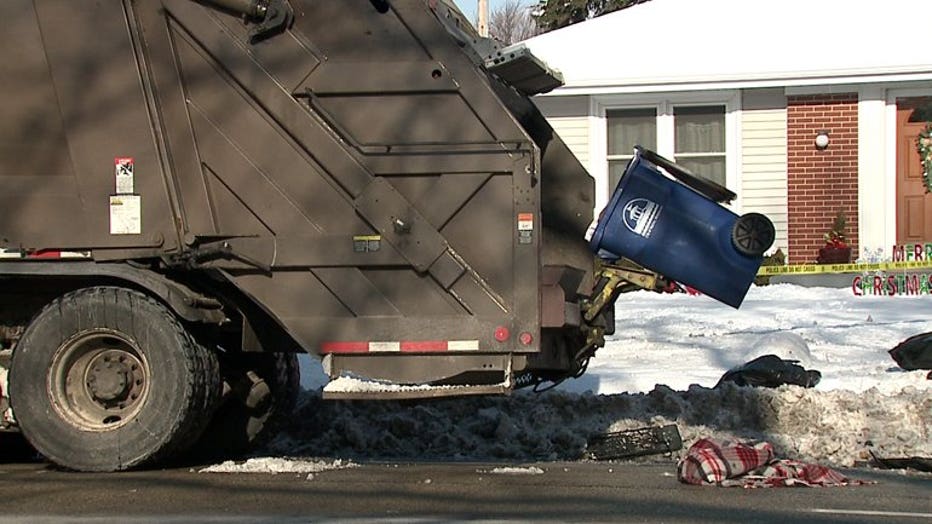 One witness told officers the Mustang passed him on Washington Avenue at Lathrop, and it was traveling at approximately 60 miles-per-hour. 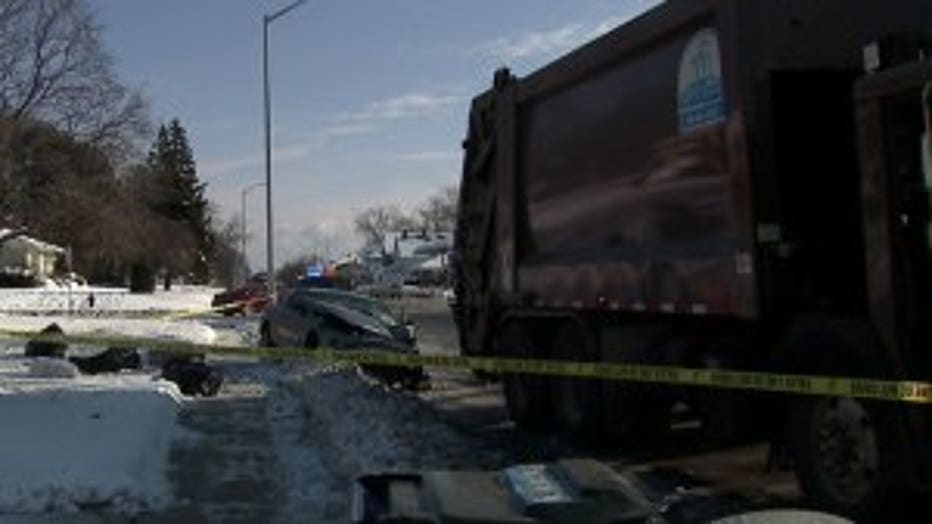 Another witness said he saw the Mustang changing from one lane to another to pass vehicles, and he estimated the Mustang was traveling 10 to 15 miles per hour over the posted 30 miles-per-hour speed limit.

A third witness said she saw the Mustang driving recklessly on Washington Avenue -- traveling at a high rate of speed and weaving between lanes to pass vehicles. 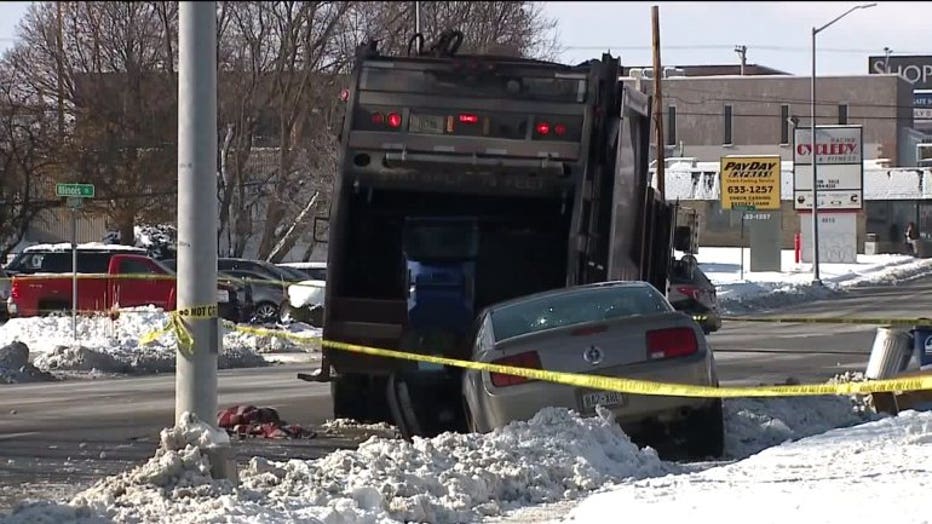 A passenger in the Mustang told investigators he believed Bell was going no more than five miles over the speed limit -- and he was texting, and looked up, and the garbage truck was right in front of him.

The complaint indicates the investigation is ongoing, and additional charges could be filed. 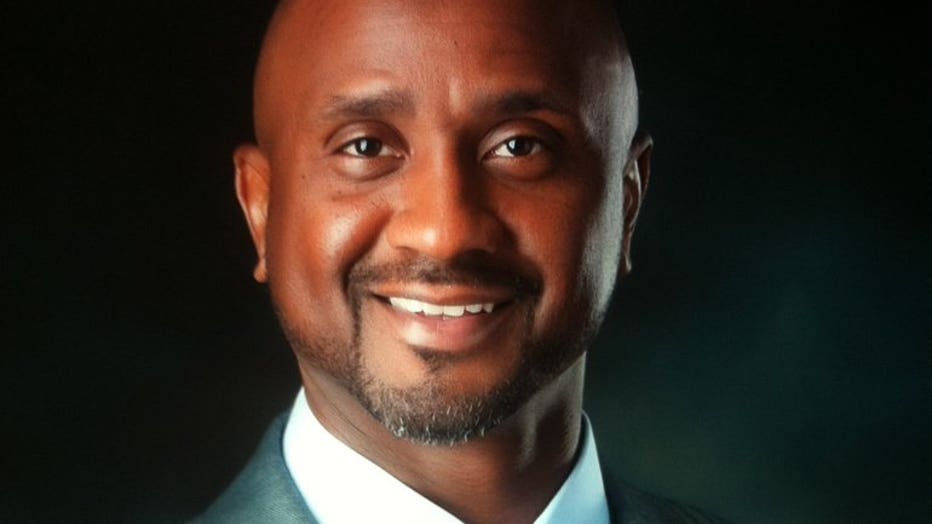 Gates' City of Racine DPW coworkers and first responders gathered at the scene Wednesday afternoon to remind drivers to slow down.

"One of my coworkers got hit out here doing his job, and my reaction is it could have been any one of us," Craig St. Amant said.

"We're out here every day trying to do the job for the community. Just slow down," a sanitation worker said.

"We received official word that our colleague Mark Gates died this afternoon from injuries sustained after having been struck by a speeding vehicle while collecting recyclables as part of his job.

Mark was a highly respected and dedicated employee as well as a deeply faithful and caring pastor, and he will be missed by all who knew him.

Racine Mayor John Dickert reminds us to be mindful of all city workers whose jobs take them into the streets.

We all need to slow down and be aware of those with whom we share the road."

Gates should've been taking part in Bible study Wednesday evening at Christ Chapel Missionary Baptist Church near 8th and Park Avenue. Instead, many of those who knew him came to the church to mourn.

Gates was a fixture at Christ Chapel.

"He was a father figure to my kids. For the kids at church that know him as more than just their pastor, in a way, this is God's ultimate healing. He's home," Freeman said.