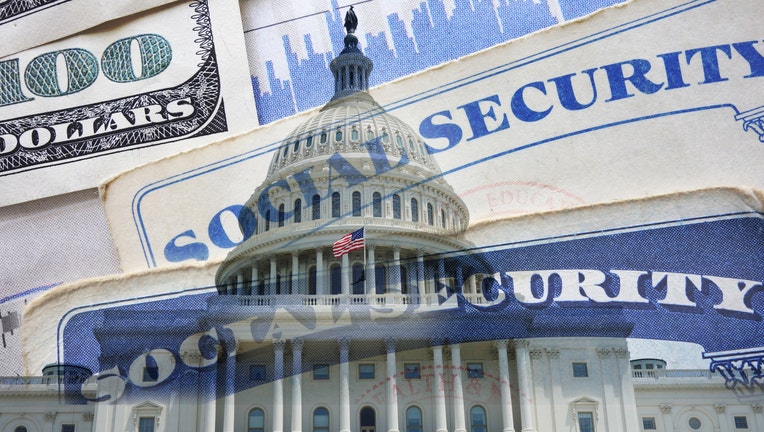 United States capitol in Washington DC with a Social Security card and money. via Getty Images

The non-partisan Congressional Budget Office updated its long-term projections on the solvency of Social Security last month, finding that the program's major trust funds could be tapped out in 2033.

The CBO's analysis found that if the projected gap between the outlays from the trust funds and the revenue they receive happens as forecast, the balance of the trust funds would hit zero in 2033 and the Social Security Administration wouldn't be able to pay out full retirement benefits as they come due.

Federal spending on Social Security has been on an upward trend as the proportion of Americans at or above retirement age has increased relative to the active workforce. That has strained the program's trust funds as their balances get tapped to augment payroll tax revenue used to pay out full benefits to retirees.

The CBO sees this trend remaining in the decades ahead with spending on the program rising from 5% of U.S. gross domestic product to 7% in 2096 – while revenues would remain at around 4.6% of GDP over that same period. This structural deficit is what would cause the trust funds to be exhausted in the next few decades, barring reforms to shore up Social Security's finances.

Over the course of the 75-year forecast, the CBO found that Social Security's actuarial deficit amounted to 1.7% of GDP, or 4.9% of taxable payroll. This means that balances in the Social Security trust funds could be maintained through 2096 if there was an immediate and permanent increase in payroll tax rates of 4.9%, or there was an equivalent reduction in benefits or a combination of tax increases and benefit reductions.

The CBO analysis also looked at what Social Security benefits would look like after the projected exhaustion of the trust funds in 2033.

It found that if Social Security benefits were limited to what's payable from annual tax revenues, benefit payments would be about 23% smaller than scheduled benefits in 2034. The gap would rise as time goes on with payable benefits being 35% smaller by 2096.

Under current law, there is no formula for reducing Social Security benefits to what is payable based on payroll tax revenue, so there is some uncertainty over what the SSA would do and whether lawmakers would respond with reforms before the trust funds become exhausted.

In the CBO's analysis of the scenario in which Social Security benefits were limited to what's payable based on incoming revenue, it found that younger age cohorts would see the biggest change to their initial benefits and lifetime benefits because they generally won't begin receiving payments until after the exhaustion of the trust funds: