LOUISVILLE, Ky. - An officer involved in the Breonna Taylor shooting case has filed a lawsuit against her boyfriend, claiming battery, assault and emotional distress.

Sgt. Jonathan Mattingly filed suit against Kenneth Walker III in Jefferson County Circuit Court on Oct. 29. Mattingly claimed that on March 13, he and officers Myles Cosgrove and Brett Hankison, arrived at Taylor’s apartment, “knocked repeatedly and announced themselves as police.”

The lawsuit further stated the officers forced entry after no one answered, and Mattingly saw Walker standing in the hallway with a gun pointed at him. Walker claimed police didn’t identify themselves and he believed they were intruders.

The lawsuit claimed that the sergeant  “felt a sharp, hot pain in his leg and realized he had been shot by Walker. The shot struck Sergeant Mattingly in his femoral artery, in his upper thigh, and caused serious injury to Mattingly that required emergency medical attention.”

Mattingly is seeking compensatory and punitive damages for battery, assault and emotional distress. “Sgt. Mattingly was shot and nearly killed by Kenneth Walker. He’s entitled to, and should, use the legal process to seek a remedy for the injury that Walker has caused him,” said the officer’s attorney, Kent Wicker, in a statement.

Oral arguments in the case are scheduled for Nov. 12.

Police had originally gone to Taylor’s apartment on March 13 as part of an ongoing investigation into an illegal drug-trafficking operation.

Officers obtained a “no-knock warrant,” with the permission to search the apartment. Taylor and her boyfriend, Walker, were inside at the time. Mattingly claimed after Walker shot him, the sergeant and the other officers returned fire but missed.

Taylor was shot five times and died from her injuries. No drugs or cash were found at her home.

Taylor’s death was an impetus for widespread social justice protests across the country in the months that followed. 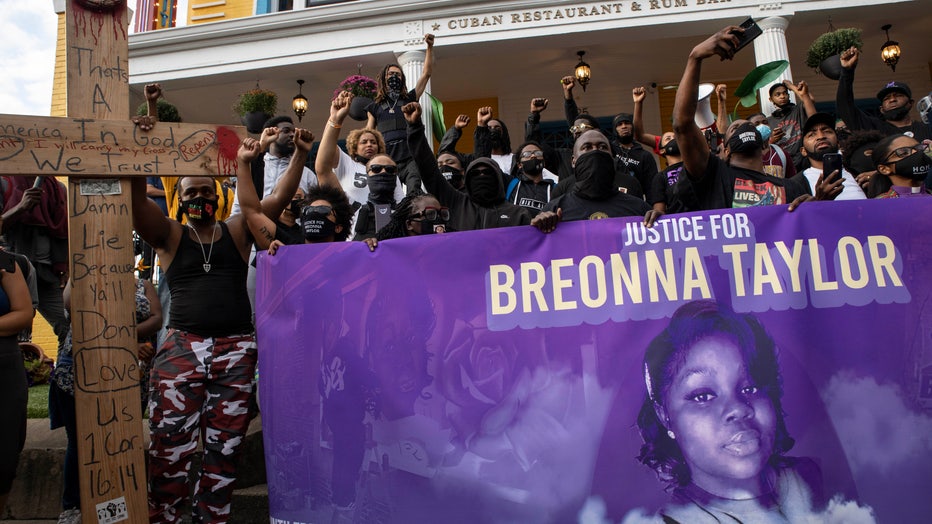 Protesters stand in front of a local Cuban restaurant while chanting slogans during the demonstration. ((Photo by Stephen Zenner/SOPA Images/LightRocket via Getty Images))

A grand jury later indicted Walker for the attempted murder of  a police officer. The Commonwealth Attorney’s Office dismissed the charge without prejudice.

Walker filed suit against Mattingly and Cosgrove. The officers have filed a motion to dismiss the lawsuit, claiming immunity.  A grand jury did not indict Mattingly or Cosgrove.

Instead, a grand jury indicted Hankison on three felony counts of wanton endangerment for shooting into an apartment next to Taylor’s. He was fired from the force. Hankison has appealed his termination.

Taylor’s mother is calling for a new special prosecutor to investigate police actions in her daughter's death, adding her voice to two grand jurors who are speaking out about the Kentucky attorney general's handling of the case.

Tamika Palmer said that on the day of the grand jury decision announcement last month, Cameron told her “the grand jury declined to indict other officers and that his team had done the best they could.”

But two anonymous grand jurors who came forward last week said the 12-member panel was not given the chance to explore charges related to Taylor's shooting death by officers.

Palmer said after Cameron told her the grand jury was only able to indict a former officer for wanton endangerment, “Cameron and one of his prosecutors then advised me that I should consider finding peace through the Lord and watched as I sobbed uncontrollably,” she wrote in the letter.

One of the two anonymous grand jurors said he felt the police actions on the night of her death were “criminal." The two men, one white, one African American, said they took issue with statements by Cameron that the grand jury “agreed” that homicide charges against the officers were not on the table because the Louisville police officers were justified in returning fire at Taylor’s apartment.

“We were never told of any additional charges,” one of the grand jurors said in a conference call with reporters Wednesday afternoon.