LONDON -- Police shot dead a man suspected of stabbing several people near London Bridge on Friday in what detectives declared a terrorist incident.

The Metropolitan Police said “a number” of people were wounded but gave no information on the number or their conditions.

The force’s counterterrorism chief, Neil Basu, said the suspect was feared to be wearing a bomb vest but it turned out to be “a hoax explosive device."

Basu said officers were keeping “an open mind as to any motive.”

The violence erupted two-and-a-half years after a van and knife attack in the same area in which eight people died.

Police said the incident began with reports of a stabbing at a “premises” near the bridge; it ended with passersby tackling the fleeing knifeman before he was shot dead by armed-response officers.

The police force said officers were called just before 2 p.m. “to a stabbing at premises near to London Bridge,” which links the city’s business district with the south bank of the River Thames. 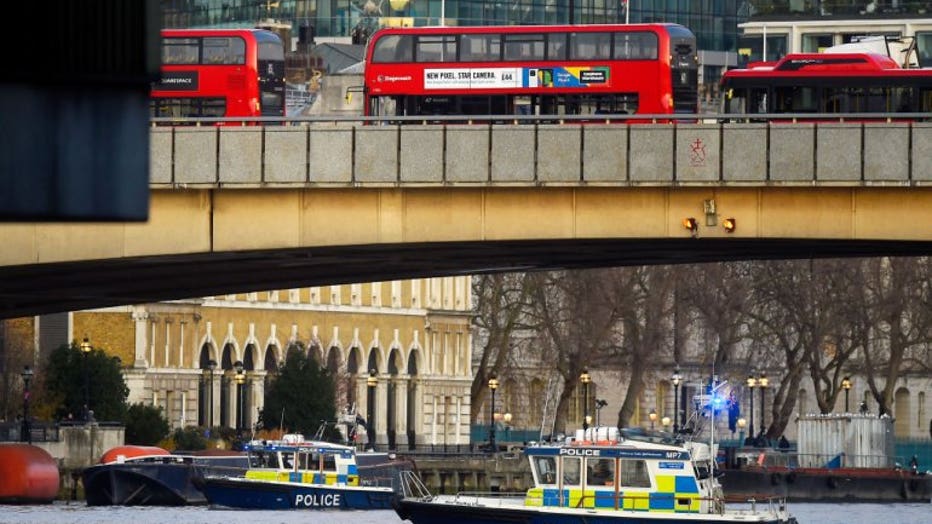 LONDON, ENGLAND - NOVEMBER 29: Boats from the Metropolitan Police Marine Policing Unit patrol near the scene after several people are believed to have been injured after a stabbing at London Bridge, police have said, on November 29, 2019, in London,

Scores of police, some armed with submachine guns, rushed to the scene, ushering bemused office workers and tourists out of an area packed with office buildings, banks, restaurants and bars. Staff in office blocks in the area were told to stay inside.

Witnesses reported seeing what appeared to be fighting on the bridge, as several people attempted to hold a man down.

One video posted on social media showed two men struggling on the bridge before police pulled a man in civilian clothes off a black-clad man on the ground. Shots then rang out.

Other images showed police, guns drawn, pointing at a figure on the ground in the distance. 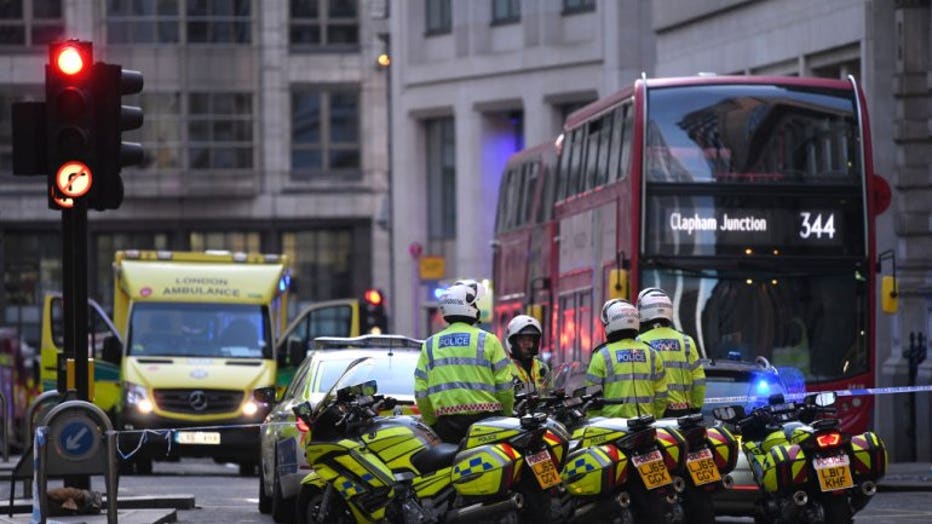 LONDON, ENGLAND - NOVEMBER 29: Metropolitan Police officers gather near Borough Market after a number of people are believed to have been injured after a stabbing at London Bridge, police have said, on November 29, 2019 in London, England. Police sai

Amanda Hunter said she was on a bus crossing the bridge when she heard shots.

"(The bus) all of a sudden stopped and there was commotion and I looked out the window and I just saw these three police officers going over to a man,” she told the BBC.

"It seemed like there was something in his hand, I'm not 100% sure, but then one of the police officers shot him.”

Karen Bosch, who was also on a bus, said she saw police “wrestling with one tall, bearded man” and then heard “gunshots, two loud pops.”

She said the man "pulled his coat back which showed that he had some sort of vest underneath, whether it's a stab vest, or some sort of explosive vest, the police then really quickly moved backwards, away.” 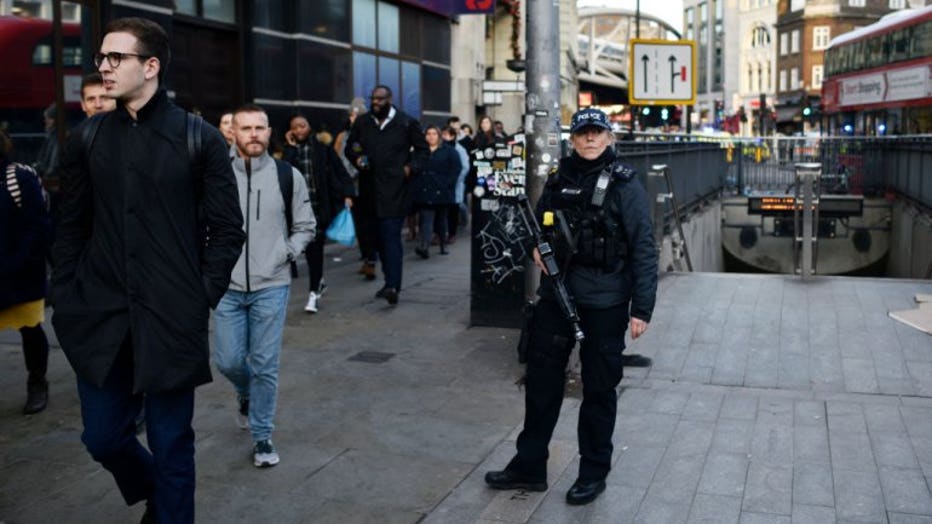 LONDON, ENGLAND - NOVEMBER 29: Metropolitan Police officers set up a cordon near Borough Market after several people are believed to have been injured after a stabbing at London Bridge, police have said, on November 29, 2019, in London, England. Poli

Cars and buses on the busy bridge were at a standstill after the shooting, with a white truck stopped diagonally across the lanes. Video footage showed police pointing guns at the truck before moving to check its contents.

British Transport Police said London Bridge station, one of the city’s busiest rail hubs, was closed and trains were not stopping there.

City of London Police, the force responsible for the business district, urged people to stay away from the area.

The incident revived memories of the June 2017 London Bridge attack, when three Islamic State-inspired attackers ran down people on the bridge, killing two, before stabbing several people to death in nearby Borough Market.

That incident took place days before a general election. Britons are due to go to the polls again on Dec. 12.

Prime Minister Boris Johnson’s office said he was receiving updates on the incident and was returning to his 10 Downing St. office from campaigning in his local constituency.

In March 2017, an attacker fatally struck four people with a car on nearby Westminster Bridge then fatally stabbed a police officer before security forces shot and killed him in a courtyard outside Parliament.

Security officials earlier this month downgraded Britain's terrorism threat level from "severe" to "substantial," which means an attack is seen as "likely" rather than "highly likely." The assessment was made by the Joint Terrorism Analysis Centre, an independent expert body that evaluates intelligence, terrorist capability and intentions.

The UK's terror threat was last listed as "substantial" in August 2014; since then it has held steady at "severe," briefly rising to "critical" in May and September 2017.