Winds of change: Nevada family hopes to save lives after losing their daughter in a bounce house accident

Nine-year-old Lizzy Hammond was killed in 2019 when an inflatable water slide she was playing in at a birthday party took flight in a gust of wind into power lines in Reno, Nevada.

RENO, Nev. - Even though Lizzy Hammond was only nine, her soul had generations of love.

She had just finished the third grade and was already an established volunteer in her community. From a very young age, the Reno, Nevada, child was helping with local food banks, supporting the homeless and numerous charities within her Catholic parish.

"She loved everybody, talked to everybody and wasn’t afraid of anybody. She was very outgoing," her father, Mitch Hammond, reminisces.

But what happened to Lizzy on July 14, 2019, was not a freak accident. She died from blunt force trauma to the head when the bounce house she was playing in at a friend’s birthday party took flight in a gust of wind into power lines.

"For people to say it's a freak accident, it really isn't. The injuries are astronomical."

Lizzy’s 4-year-old brother, Danny, was in the bounce house with her.

"Lizzy was his world. He looked up to her," her mother, Lizzy Hammond, reflects.

Danny is still struggling to find his way today after moving up in the birth order to the big brother. His 2-year-old sister, Abby, played in a water bucket next to the inflatable water slide when everything took flight. 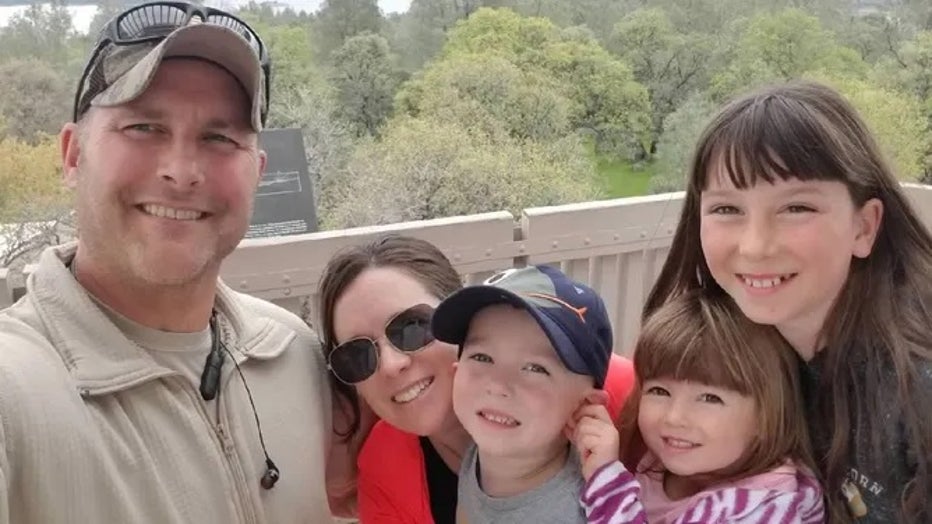 Nine-year-old Lizzy Hammond, far right, was killed in 2019 when an inflatable water slide she was playing in at a birthday party took flight into power lines in South Reno, Nevada. (Mitch and Wendy Hammond)

"This is a mom at a party with three kids. I had to pick which kid I go for as the wind picked up," Wendy Hammond said. "My instinct, I was closest to the smallest. And Lizzy always took care of everybody. She always took care of Danny when needed."

While screaming for them to get out, she was knocked over and spun around as the slide took flight while she grabbed her toddler. Soon, the bounce house was moving along the nearby power lines.

Lizzy was rushed by ambulance to a nearby hospital as first responders worked to resuscitate her. She was declared dead two days later.

"We had a lot of trauma those months following," Wendy Hammond said. "Not only the trauma of losing your daughter but having two children traumatized by high winds."

‘It happens more than you think’

Fatal incidents involving bouncy castles are not unheard of.

Last year, six children died, and nine others were seriously injured at a school party in the Australian state of Tasmania. The jumping castle was lifted by what local police said was a significant local wind event and fell 33 feet in the air.

In 2019, a 2-year-old Lincoln, Nebraska, boy died after 60 mph wind gusts tore an inflatable jumping pad from its anchors at a pumpkin patch where he and his sister were playing.

"For people to say it’s a freak accident, it really isn’t. The injuries are astronomical," Wendy Hammond said. "It happens more than you think."

The first-ever study on wind-related bounce house accidents from the University of Georgia documented 132 cases worldwide from 2000-2021. These mishaps caused at least 479 injuries in adults and juveniles and at least 28 deaths. Researchers caution that their estimates are likely an undercount.

These injuries are on top of an estimated 10,000 emergency room visits in the U.S. yearly because of bounce house-related accidents that regularly result in broken bones, muscle sprains and concussions. 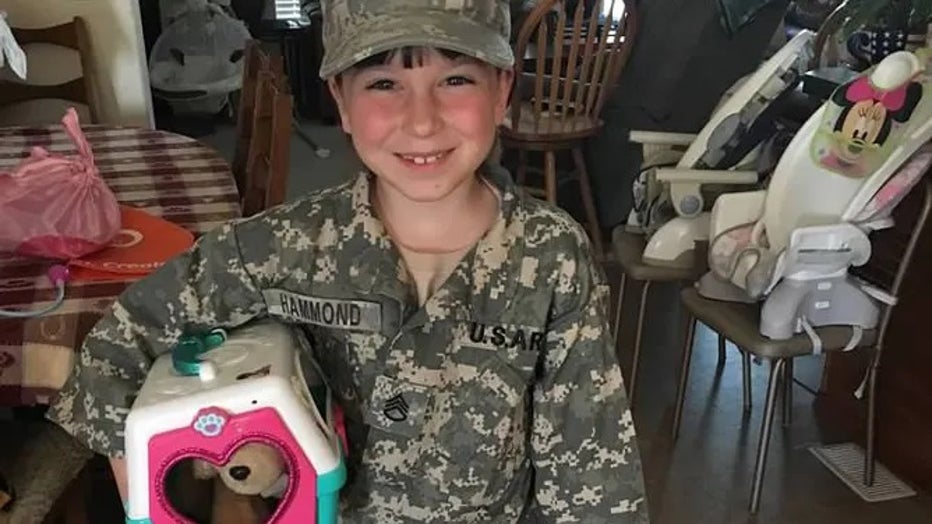 The Hammonds feel their daughter’s death could have been prevented if local, state or federal laws had regulated bounce house entertainment equipment. (Mitch and Wendy Hammond)

Lizzy’s parents have been fighting to bring awareness and educate both parents and bounce house operators on safety practices that need to be in place.

They established the Lizzy Hammond Foundation, a nonprofit organization dedicated to protecting children and their bounce house safety through education, awareness and volunteer opportunities.

The Hammonds are also working on a legislative bill to regulate bounce house businesses. Nevada is one of 17 states with either no guidelines or exclude inflatables from regulation.

Mitch and Wendy Hammond feel their daughter’s bouncy house death could have been prevented if local, state or federal laws had regulated such entertainment equipment. 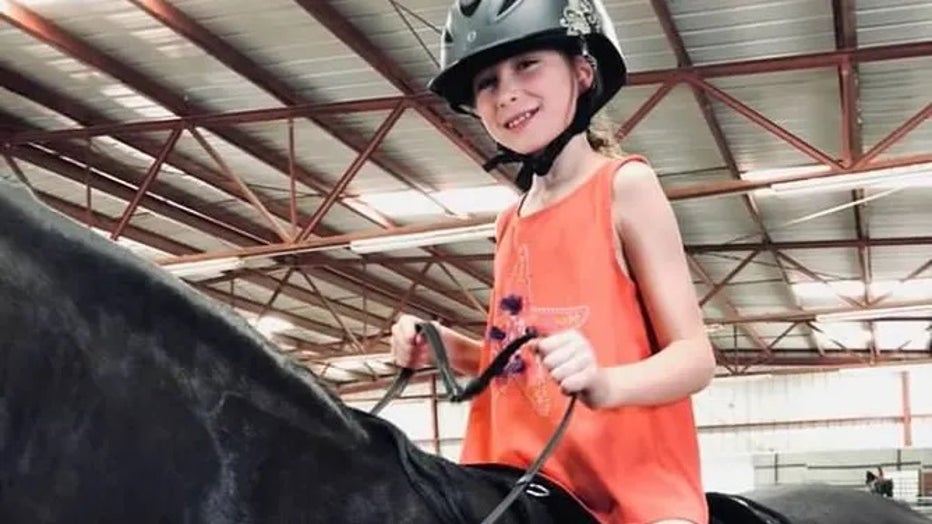 Lizzy Hamond was an organ donor. She had a conversation on the topic with her mother a couple of weeks before her death.(Mitch and Wendy Hammond )

"We know that you can’t rid the world of bounce houses. As much as we would like to see that happen, it’s not going to happen," Mitch Hammond said.

When it came to the investigation piece following Lizzy's death, her family said authorities didn’t hold the bounce house owner guilty of anything because there were no laws to govern him.

"And that’s what’s really sad … we lost our precious baby, and this guy didn’t even get a citation," Mitch Hammond said.

"If we could have just had the weight, something on there, to start to give the kids a chance to get out. That’s what this law is about," Wendy Hammond added. "It’s really a matter of weighting these things down."

So now, they fight for Lizzy’s Law.

The COVID-19 pandemic temporally halted their grassroots efforts to present the law to state assemblies, but they are working with a lobbyist to get a motion in order, hopefully.

The hope of Lizzy’s Law would require bounce house businesses to be licensed, bonded and insured, in addition to other strict guidelines similar to 19 different U.S. states’ laws or regulations for commercial bounce houses. 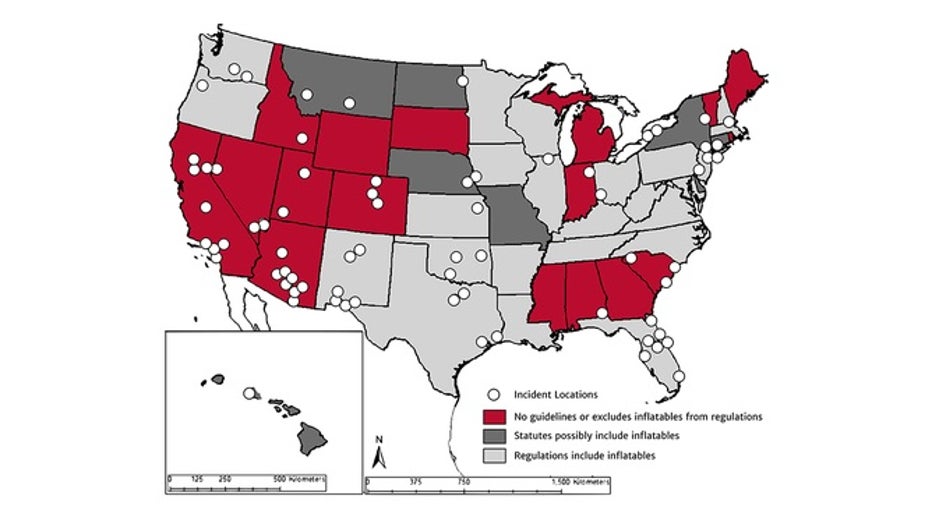 Many, but not all, of the bounce house accidents the researchers logged occurred in states with no regulations governing bounce house use. (Lindsay Robinson/University of Georgia)

In North Carolina, regulations detail precisely how all inflatable or air-supported amusement devices should be operated in the state.

At least one operator is required to be on duty any time the device is inflated. All inflatable or air-supported slides 20 feet or higher should have at least two operators -- one located at the top of the slide and one at the bottom.

In addition, the devices must be anchored according to the manufacturer’s specifications, and detailed guidelines are given on the size and depth of ground stakes. Anchor weights must also meet strict requirements. Wind speed is also outlined specifically to immediately unloaded and deflated when once reached 25 mph.

"How many people have to die in an intersection before any state, locally, would put in a streetlight? Or how many people would die in a vehicle before they enforce the seatbelt law?" Mitch Hammond said. "How many kids have to die before we actually make this a federal law that bounce houses need to have certain minimum guidelines?"

Lizzy was an organ donor. She had a conversation on the topic with her mother a couple of weeks before her death.

"Maybe that’s why God chose that conversation for that day to help us with our decision later. It wasn’t an easy decision," Lizzy’s mom said.

But based on Lizzy’s past in reaching out to society, organ donation would eventually be another way she would eternally help someone else.

Her parents said it was one of the most significant honor walks the hospital had ever seen. Doctors, nurses, military and local police joined Lizzy’s friends and family as her hospital bed was wheeled down the hallway. Donor Network West would harvest her kidneys and liver to help save the lives of three other children. 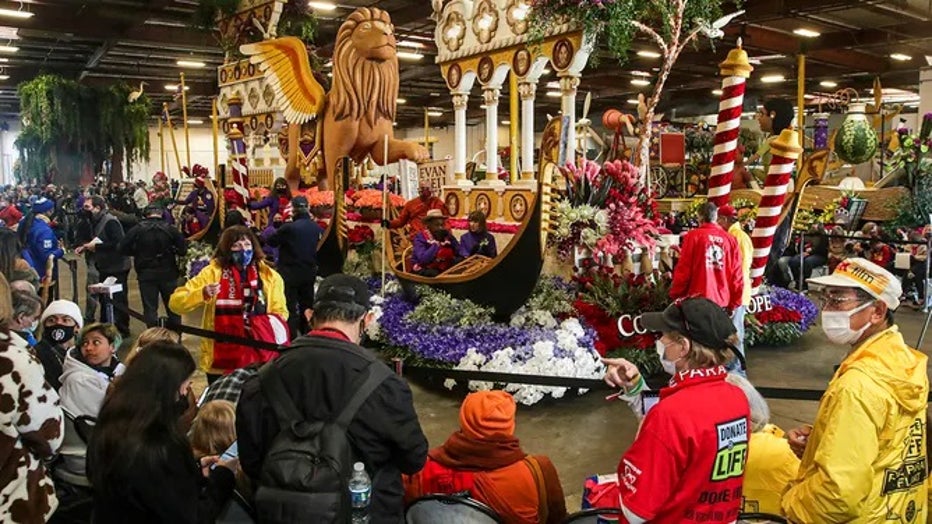 The Hammond's mission is to ensure there are zero bounce house accidents, but they say they can’t do it alone. If you would like to contribute to the Lizzy Hammond Foundation,  click here to learn more on how to donate.

LINK: Get updates and more on this story at foxweather.com.