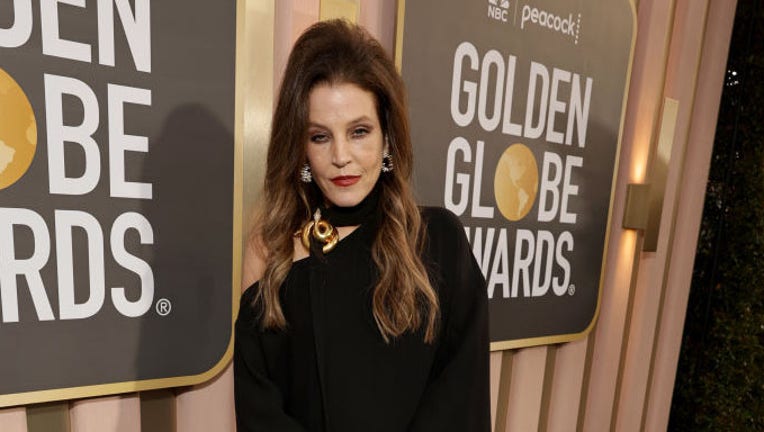 Lisa Marie Presley, the only child of Elvis Presley, was last seen in public at the Golden Globes award ceremony Tuesday, just days before she died. She died on Jan. 12 at age 54.

During NBC’s 80th Golden Globes Tuesday night at The Beverly Hilton, Presley was sitting at a table and seen applauding actor Austin Butler, who won an award for Best Actor in a Drama Motion Picture for his performance depicting her father in the 2022 musical drama "Elvis."

Butler used his acceptance speech to thank Lisa Marie Presley and her mother Priscilla, who were sitting together with his sister, Ashley.

"Thank you for opening your hearts, your memories, and your home to me. Lisa Marie, Priscilla, I love you forever," he said.

A teary-eyed Lisa Marie covered her face, patted her heart and applauded.

Butler also commended "Elvis" filmmaker Baz Luhrman — who he called a "bold, visionary filmmaker" — for giving him the opportunity and allowing him to "take risks."

Presley, who was sitting with Luhrman, was seen applauding the remarks.

Lisa Marie Presley, the only child of icon Elvis Presley and Priscilla Presley, has died. She was 54. "It is with a heavy heart that I must share the devastating news that my beautiful daughter Lisa Marie has left us," Priscilla told People Magazine on Jan. 12. "She was the most passionate strong and loving woman I have ever known. We ask for privacy as we try to deal with this profound loss. Thank you for the love and prayers. At this time there will be no further comment." More LiveNOW from FOX streaming video

LISA MARIE PRESLEY, ELVIS AND PRISCILLA'S ONLY CHILD, DEAD AT 54

He also thanked his "dance partner" Tom Hanks, who was also in the film portraying Elvis’ manager, Colonel Tom Parker.

During his acceptance speech, Butler applauded his fellow nominees and said he was honored to even be considered.

The 31-year-old won the award over Hugh Jackman, for his performance in "The Son," Brendan Fraser, for "The Whale," Bill Nighy, for "Living" and Jeremy Pope, for The Inspection."

"I just am so grateful right now," he opened his remarks, "I am in this room full of my heroes."

"Elvis" was also nominated for Best Drama Motion Picture, which was won by the Steven Spielberg-directed "The Fabelmans." The other nominees included "Avatar: The Way of the Water" and "Top Gun: Maverick."

The Golden Globes released a statement saying the organization was "incredibly saddened to hear" of Presley’s death.

"We are incredibly saddened to hear of the passing of Lisa Marie Presley. She was an extremely talented Singer/Songwriter and a very welcome presence at the Golden Globes this past Tuesday. May you rest in peace," the statement read.

Tuesday’s ceremony was the show’s first telecast after it was canceled last year amid controversy regarding diversity.

Lisa Marie Presley died Thursday after being hospitalized for a possible cardiac arrest. She was 54.