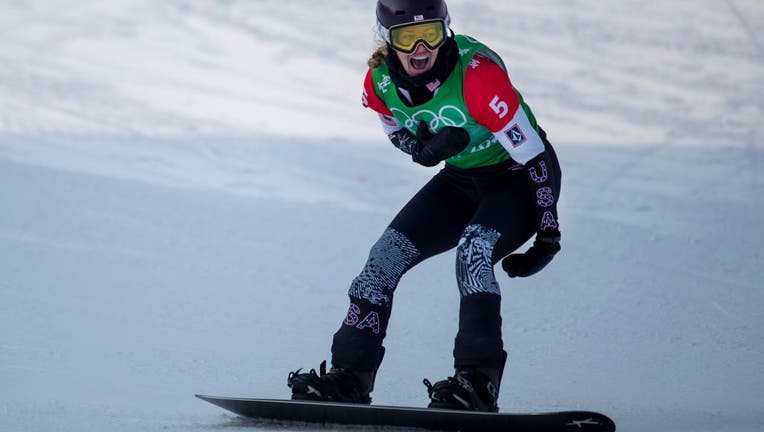 Lindsey Jacobellis of the United States reacts as she wins the gold medal during the Women's Snowboard Cross at Genting Snow Park during the Winter Olympic Games on February 9th, 2022 in Zhangjiakou, China. (Photo by Tim Clayton/Corbis via Getty Imag

Let that sink in for a moment because Jacobellis has been trying for 16 years.

Jacobellis helped make the wild sport of snowboardcross famous. Who could forget her premature celebration as she approached the finish line in the 2006 Turin Games, an ill-timed board grab that sent her tumbling out of the lead? In a way, she became one of the best-known silver medalists of all time.

Now Jacobellis will be remembered as the first American gold medalist at the Beijing Olympics. She reached the top of the podium hours after Mikaela Shiffrin had another stunning early exit on the Alpine ski hill.

Jacobellis rode hard to the finish of the snowboardcross final on Wednesday, beating Chloe Trespeuch of France and covering her heart with her hands as she slowed.

Jacobellis was 20 when she made the mistake in Turin. Now 36 and in her fifth Olympics, she became the oldest U.S. woman to win a gold. The 16 years is also the longest gap between medals for any U.S. woman.

She never stopped reaching for a gold medal.

"They can keep talking about it all they want because it really shaped me into the individual that I am," Jacobellis said. "It kept me hungry and really kept me fighting in this sport."

The United States will be represented by 217 athletes in 15 sports at the Beijing Olympics. Here's a look at the Americans to watch at the Winter Games:

A glum Olympics for the Americans actually began to brighten a few hours earlier when California snowboarders Chloe Kim and Shaun White, the defending gold medalists, had joyful rides through the halfpipe. Kim earned the top spot in women’s qualifying while White, a three-time gold medalist in his fifth and final Olympics, was fourth in the men’s qualifying.

"This feels incredible because the level that all the women are riding at today is so much higher than it was 16 years ago," Jacobellis said.

Jacobellis said she’d advise young riders to not let mistakes define them. "Especially if you’ve made it to this stage, you’re a winner. And look at what you’ve learned from the experience and take that with you later in life."