Police are examining what's been described as a knife said to have been found at the Los Angeles-area estate once owned by former football star O.J. Simpson, Los Angeles police Capt. Andy Neiman said Friday. 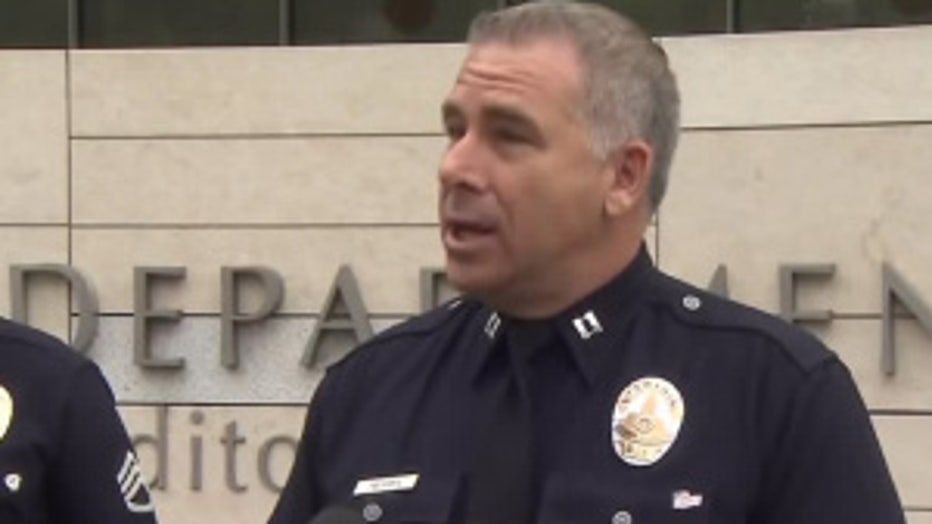 Police learned within the last month that a former Los Angeles police officer received the item from a construction worker who found it "back in the '90s," possibly when Simpson's former estate in Brentwood was being demolished, according to Neiman. It is being examined for forensics -- including DNA and hairs -- at a lab, he said.

Simpson was acquitted in the 1994 killings of ex-wife Nicole Brown Simpson and her friend Ronald Goldman.

The now-retired officer who had the knife "held onto it until just recently," and authorities "discovered he had it" within the last month, Neiman said.

The construction worker told the officer he had found the knife on the former Simpson property, according to Neiman. 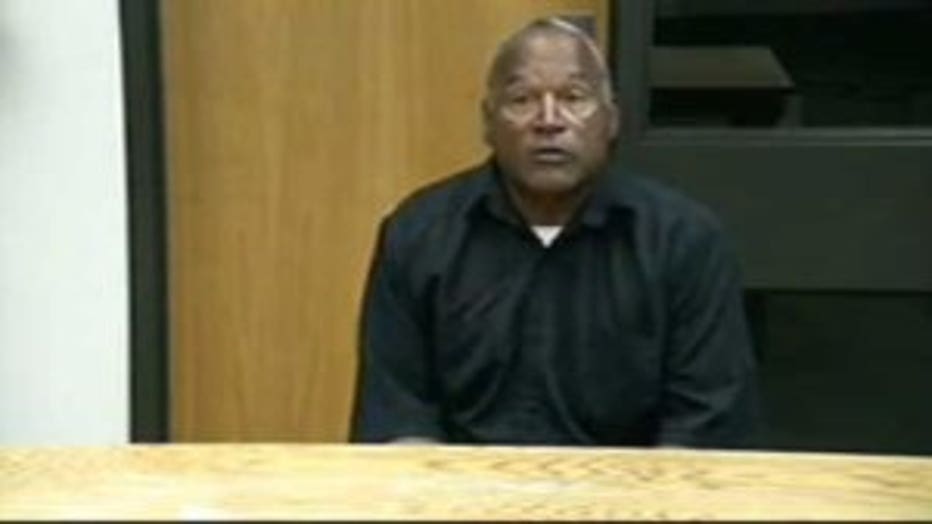 O.J. Simpson appeared in a Carson City courtroom by video conference Thursday, July 25, 2013 in a bid to have his 2008 robbery and kidnapping sentence reduced.

Neiman said he is not sure whether the officer had already left the force when he received the object.

At the time, he was working off duty on a "movie" job, according to Neiman. The officer retired in the late 1990s, he said.

Whoever found the object should contact police, Neiman told reporters.

The officer possibly held onto it in the mistaken belief that the case was closed, Neiman said. The case remains open.

The weapon used in the two stabbing deaths was described as a long, serrated knife. It was never found.

In the murder trial that gripped the nation's attention in the mid-1990s, Allen Wattenberg, owner of Ross Cutlery store, testified that his employee sold Simpson a 15-inch stiletto knife on May 3, 1994. He said Simpson asked that the knife be sharpened.

Prosecution witness Dr. Lakshmanan Sathyavagiswaran told the jury that he believed the killings were done with a single-edged knife.

During cross-examination, however, the doctor said he could not be positive. 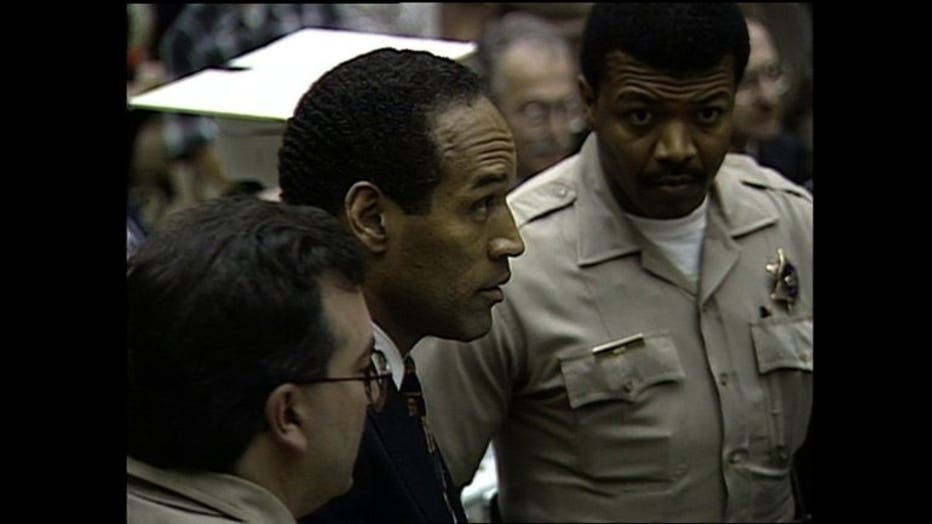 In 1995, O.J. Simpson went on trial for the killing of his ex-wife, Nicole Brown Simpson, and her friend Ronald Goldman, in what became a wall-to-wall televised proceeding.

Flanked by his all-star legal team, Simpson was found not guilty in the two killings on October 3, 1995. He cannot be tried again.

Testimony in the trial took about nine months, encompassing about 120 witnesses, 45,000 pages of evidence and 1,100 exhibits.

In September 2007, Simpson was arrested in connection with a robbery at a Las Vegas hotel room. The ex-athlete said at the time he was retrieving personal items that had been stolen from him and were being sold as memorabilia. 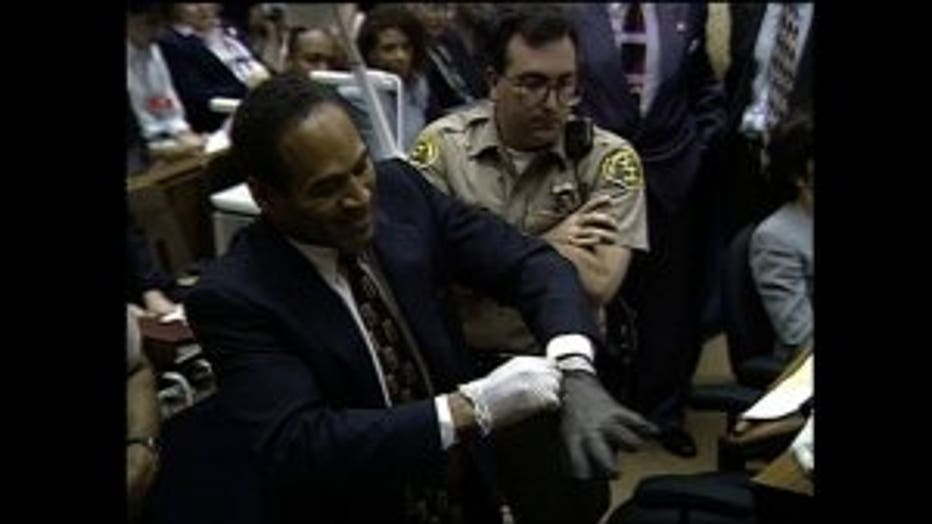 In 1995, O.J. Simpson went on trial for the killing of his ex-wife, Nicole Brown Simpson, and her friend Ronald Goldman, in what became a wall-to-wall televised proceeding.

He was booked him on six counts of robbery, assault, burglary and conspiracy.

In October 2008, Simpson was found guilty on 12 counts, including kidnapping and armed robbery. He later was sentenced to at least 33 years in jail, with parole eligibility after nine years.

Interest in Simpson and the 1994 killings has spiked since the February debut of the FX series "American Crime Story: The People vs. O.J. Simpson."

Google searches for Simpson and other key figures in the case have skyrocketed in recent weeks amid record-setting ratings for the cable series, which brought in the largest debut audience ever for FX, according to Variety.

The series is based on the book "The Run of His Life: The People v. O.J. Simpson" by CNN legal analyst Jeffrey Toobin. 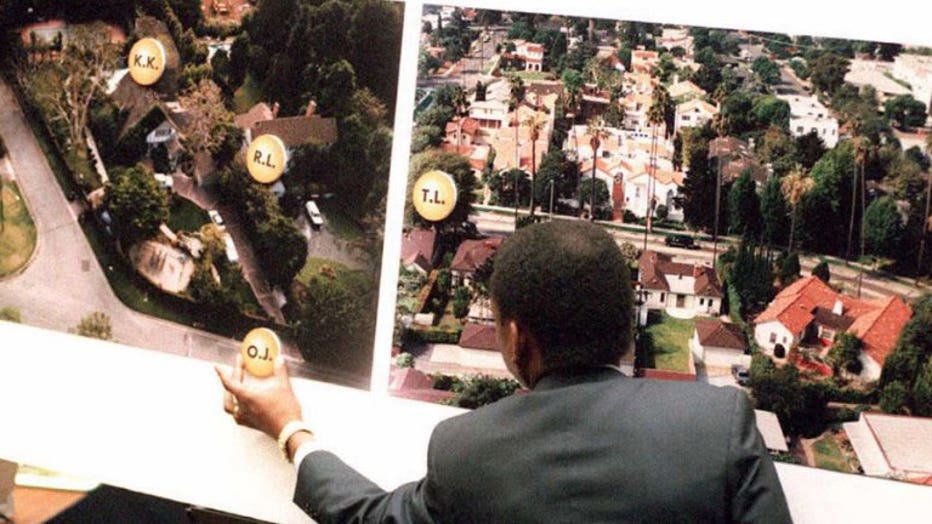 Defense attorney Carl Douglas details the movement of key players at O.J. Simpson's estate compound (L) and Nicole Simpson's condo (R) on the night of the murders of Nicole Brown Simpson and Ron Goldman during the defense opening statements on Januar