The cover image of Taylor was created by 24-year-old digital artist Alexis Franklin and is set to hit newsstands on Aug. 11.

The attorney general of Kentucky extended condolences to the family of Breonna Taylor this week, meeting with them for the first time since Taylor was fatally shot by police during a drug raid in March, according to reports.

Attorney General Daniel Cameron claimed he didn’t try to meet with the family sooner because he wanted to avoid any interference with his office’s investigation into the case, family members told ABC News.

“He wants to have the right answer at the end of this. He doesn’t want to rush through it,” Taylor’s mother, Tamika Palmer, said at a Thursday news conference, one day after she and other family members met with Cameron and Louisville Mayor Greg Fischer.

At the meeting, Cameron claimed that new interviews with witnesses would be conducted as part of the investigation, Taylor family lawyer Sam Aguiar told the Courier Journal of Louisville.

The death of Taylor, 26, on March 13 in Louisville, sparked outcry and unrest in the city and drew broader national attention following the death of George Floyd in police custody in Minneapolis two months later.

Taylor was shot multiple times after police executed a “no-knock” warrant at her apartment as part of a drug investigation. They claimed Taylor had been accepting packages for an ex-boyfriend who was a subject of the probe, ABC News reported. 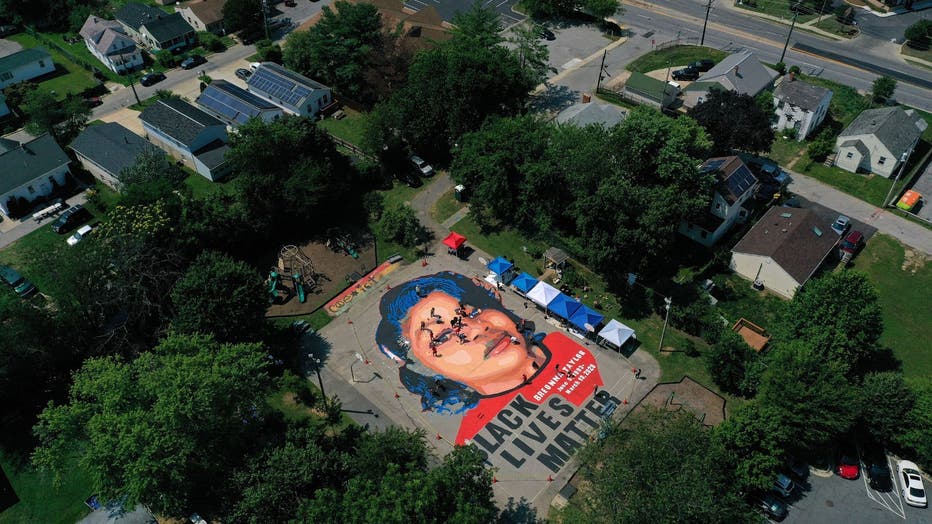 In an aerial view from a drone, a large-scale ground mural depicting Breonna Taylor with the text 'Black Lives Matter' is seen being painted at Chambers Park on July 5, 2020 in Annapolis, Maryland. The mural was organized by Future History Now in par

Police have claimed that officers began firing their weapons after Taylor’s new boyfriend, Kenneth Walker, began firing at them, striking one police officer in a leg.

Walker claimed afterward that he mistakenly believed the police entering the apartment were home invaders who were trying to commit a robbery. An initial charge of attempted murder against Walker was later dropped, Louisville FOX station WDRB-TV reported.

The detective who was fired, Brett Hankison, had used his weapon “wantonly and blindly” during the raid, according to a termination letter signed by Louisville police Chief Robert Schroeder.

Other officers involved in the raid have been identified as Sgt. Jon Mattingly and Detective Myles Cosgrove.

In late July, a judge ruled that Louisville city officials must turn over all recordings of police radio communications before, during and after the raid – after Taylor’s family argued the recordings could reveal more information about the raid, during which none of the police officers was wearing a body camera, authorities have said.

Lawyers for the city claimed the request for radio recordings amounted to a “fishing expedition.”