Fists went flying inside a Kenosha middle school cafeteria Friday, March 4, and the focus now is not on the students, but an adult who stepped in to break it up.

KENOSHA, Wis. - Fists went flying inside a Kenosha middle school cafeteria Friday, March 4, and the focus now is not on the students, but an adult who stepped in to break it up.

The lunchtime fight at Lincoln Middle School was broken up by an off-duty Kenosha police officer.

That's when the off-duty Kenosha police officer appears to have put his knee on the back of one of the student's neck. 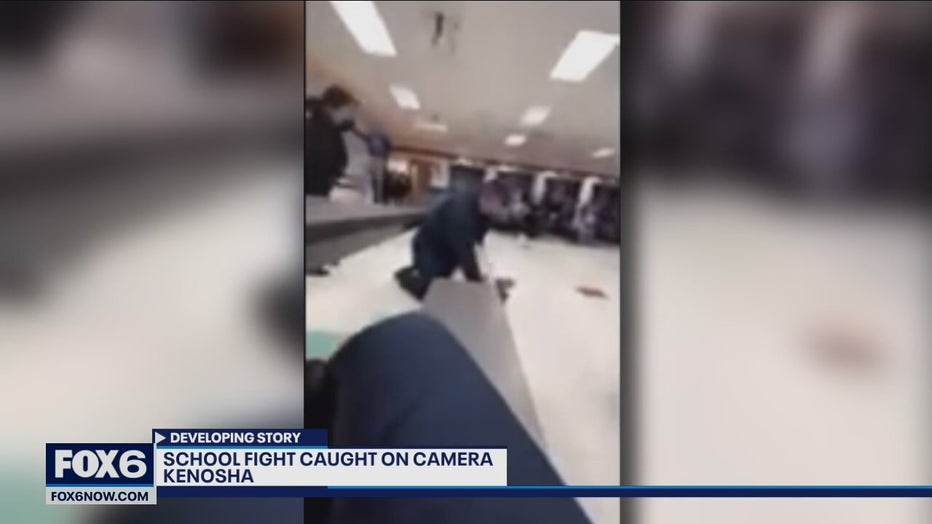 "The Kenosha Unified School District is aware of an incident that occurred between two students at Lincoln Middle School on Friday, March 4, 2022, that required intervention by KUSD staff, as well as assistance from the Kenosha Police Department. This part-time KUSD employee, who was hired as an off-duty Kenosha police officer, is currently on a paid leave from the district. We appreciate your patience as we work with the Kenosha Police Department to investigate the facts surrounding this incident."

"On Friday, March 4, 2022 a lunchtime fight between two students occurred in the cafeteria at Lincoln Middle School. Kenosha Unified School District (K.U.S.D.) employees who were monitoring the cafeteria intervened to try and stop the physical fight. One staff member was injured during the incident.

One of the employees involved was a Kenosha Police Department (K.P.D.) officer who was working off duty for K.U.S.D. This off-duty employment is permitted by K.P.D. The officer is a 37-year-old male with four years of service at K.P.D.

K.P.D. has watched the video clip and has seen the photo which has been widely shared on social media over the weekend. We are keenly aware of the significant sensitivity surrounding the photo. K.P.D., together with K.U.S.D. is investigating the incident in its entirety while being cautious not to make conclusions based off of a small piece of information shared on social media. Both agencies will look to our respective policies and procedures for guidance in this circumstance.

It is the highest priority of those officers who work in our schools to provide a safe and secure learning environment for our children and staff."

Again, both the Kenosha Police Department and school district are investigating the incident.

Firefighters battled explosions during a two-alarm fire at a Milwaukee recycling and welding facility near 30th and North on Monday evening.