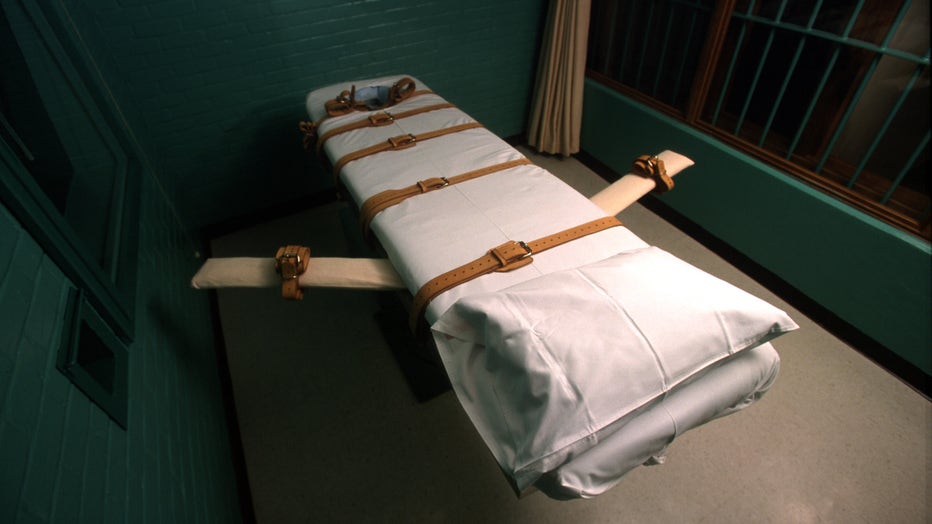 A judge on Thursday halted one of the eight executions that Arkansas had planned to carry out over the course of 10 days later this month, arguing that the hasty schedule doesn’t give the governor enough time to consider granting the inmate clemency.

U.S. District Judge D. Price Marshall ruled that the planned April 27 execution of Jason McGehee — who was convicted in the 1996 murder of a teenage boy — should be put on hold for at least 30 days.

On Wednesday, the Arkansas Parole Board recommended clemency for McGehee, who was a 20-year-old gang leader when he directed his members to torture and kill 15-year-old John Melbourne Jr. The board said that, in his 19 years on death row, McGehee has been a model inmate, and pointed to the fact that his co-defendants did not receive death sentences as justification for the clemency decision.

But the board’s recommendation is non-binding: Only Arkansas Gov. Asa Hutchinson can actually grant clemency. Typically, there is at least a 30-day comment period between a clemency recommendation and an execution, allowing outside parties to voice their opinion and giving the governor time to consider the case.

Marshall on Thursday ruled that McGehee is entitled to that 30-day period, which would not expire until May 5 — after the April 30 deadline to use the execution drugs.

The remaining seven death row inmates will, barring further judicial intervention, still be executed on schedule. Arkansas said it needed to carry out the eight executions in less than two weeks — two each on April 17, 20, 24, and 27 — because its newly-acquired supply of a key lethal injection drug expires on April 30.

The state announced in March that it had procured a stash of midozolam with an expiration date of April 30. The sedative is becoming more commonly administered to death row inmates before they are injected with vecuronium bromide, which stops their breathing, and potassium chloride, which stops their hearts as other sedatives have become difficult for states to acquire.

Florida was the first state to use Midazolam, originally designed as a sedative for patients undergoing procedures like colonoscopies, in the death chamber. The state turned to the drug when sodium thiopental, the tranquilizer that had been used in executions since the 1970s, became nearly impossible to get: the only federally approved U.S. plant to make the drug closed in 2009 due to technical problems, and the European Union — which has abolished of the death penalty — imposed stricter export controls in 2012, barring companies from shipping it to departments that carry out executions.

Lawyers for condemned inmates have argued that switching drugs is a risky experiment. Midazolam’s use in executions became especially controversial after several were botched, and lawyers for the eight Arkansas inmates have argued that it doesn’t render inmates completely unconscious before the deadly — and painful — execution drugs are administered.

Midazolam was, for instance, given to Oklahoma inmate Clayton Lockett, who died 43 minutes into his 2014 execution after "a bloody mess" of a botched execution left him groaning and writhing in pain. While officials blamed the botched execution on an improperly placed IV, critics of Midazolam said Lockett should have been more sedated during the execution. The drug was also used in the 2016 execution of convicted Alabama murderer Ronald Smith, who heaved and coughed for 13 minutes before he was declared dead.

The Arkansas inmates scheduled for execution filed a two-fold lawsuit in June 2015 alleging that the state’s laws — which allow officials to keep the source of the drugs they use to put people to death a secret — are unconstitutional. The suit also claimed that some of the chemicals used in the deadly drug cocktail may lead to unnecessary pain and suffering during the executions.

A county judge agreed with them in October 2015, and ordered the state to release the names of the companies that make the drugs. But the Arkansas Supreme Court overturned that ruling in June 2016, arguing that the name of the supplier has no relevance on the execution. The higher court's ruling also allowed the state to use Midazolam.

The U.S. Supreme Court announced in February that it would not hear the inmates’ appeal, paving the way for the April executions.

The judge’s Thursday ruling only halts McGehee’s execution; he was the only inmate scheduled to die in April that received a clemency recommendation from the parole board.

But a second, outstanding motion may stop the remaining seven inmates’ executions. That petition alleges that the state's hasty execution schedule is a form of cruel and unusual punishment, arguing that it violates their rights to counsel and their access the courts by speeding up the execution process to an unheard-of pace.

Even with just seven executions, the expedited scheduled marks most inmates killed in the shortest amount of time since the U.S. reinstated the death penalty in 1976, according to the Death Penalty Information Center, a nonprofit group that studies capital punishment. The last state to come close to such a rapid execution speed was Texas, which executed eight people over the course of 16 days in June 1997.

A U.S. court is scheduled to hear the filing alleging cruel and unusual punishment on Monday. If that bid fails, the first two inmates will be executed on April 17.

The last time Arkansas carried out a death sentence was in 2005, when it executed a single inmate.