PARIS — France bid a final adieu to Jacques Chirac on Monday as the former French president received military honors on a national day of mourning that culminated with a memorial service attended by dozens of past and current world leaders.

Cutting a solemn figure, French President Emmanuel Macron presided over the military ceremony on a mild, sunny morning near the site of Napoleon's tomb in the courtyard of Les Invalides. A military band played the national anthem, "La Marseillaise," before Macron inspected the troops. Chirac's casket, covered with a Tricolor flag, was then carried to the center of the cobbled courtyard.

Macron, who did not speak, later attended the final service at the Church of Saint-Sulpice in downtown Paris alongside family members, French politicians and foreign officials, including Russian President Vladimir Putin, former U.S. President Bill Clinton and Jordan's King Abdallah II. Queen Elizabeth II, 93, did not travel to the French capital but sent her condolences to Chirac's family and "the people of France." 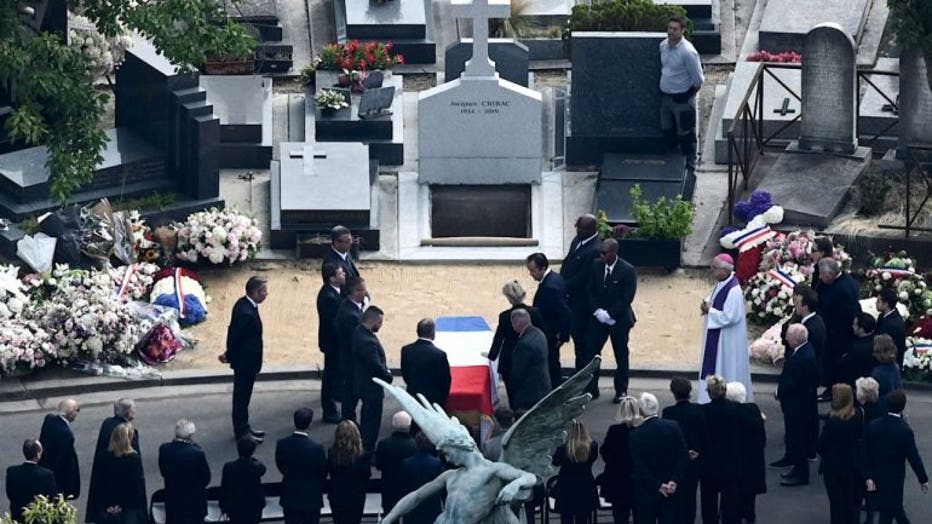 Chirac's coffin was driven to Saint-Sulpice, where pianist Daniel Barenboim played a Schubert impromptu, as mourners lined the procession route to his funeral service. When the hearse carrying Chirac drove by, the crowd broke into applause.

Standing outside of the Invalides, Nathalie Kabongo, whose husband worked on Chirac's 1995 and 2002 campaigns, said Chirac reminded her of "a politics closer to the people."

"Apart from being president, he was a man ... a warm man, a man close to people, smiling and with a heart," she said. "We need that sometimes." 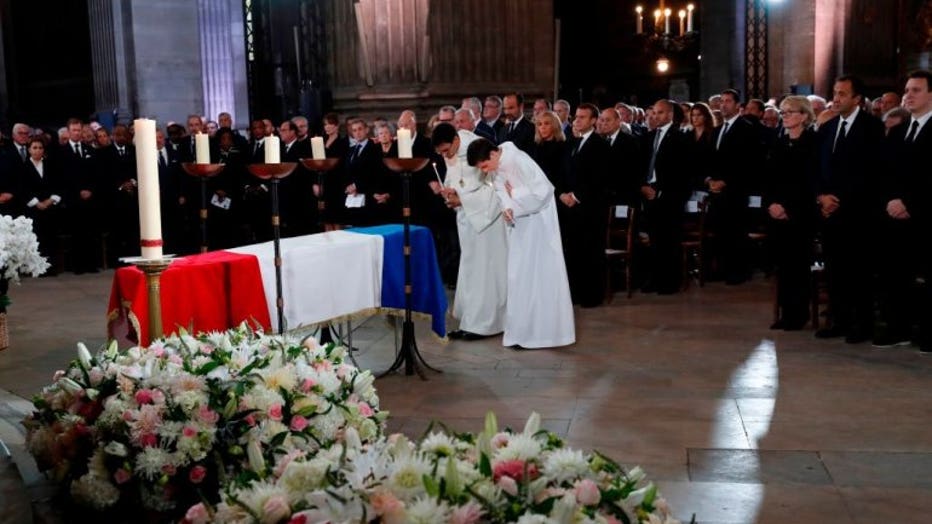 Those assembled took pictures, shed tears and held signs reading "Thank you for saying no to the war in Iraq" as they watched the flag-draped coffin onscreen.

Max Mignard, who came to pay his respects, described Chirac as the "kindest man in politics."

A private family church service for Chirac was celebrated prior to the military tribute and a private burial took place later at the Montparnasse cemetery. A minute of silence was held in schools and public buildings across the country on France's national day of mourning for its former leader.

Thousands of miles away from Paris, the French rugby players contesting the rugby World Cup in Japan joined the commemoration with a moment of silence before their training session.

A mainstay of French politics over four decades, Chirac served as Paris mayor, a lawmaker, prime minister and France's president from 1995 to 2007. The last French head of state to complete two terms in office, Chirac died last week at 86.

Known for championing the nation's sense of its own grandeur and opposing the U.S. invasion of Iraq in 2003, Chirac is being remembered fondly despite political failures and a 2011 corruption conviction from actions during his nearly two decades as mayor of Paris. As president from 1995-2007, he was a consummate global diplomat but failed to reform the French economy or defuse tensions between police and minority youths, which exploded into riots across France in 2005.

Once nicknamed "Super Liar," Chirac's popularity soared after he left office. Thousands of mourners paid him tribute Sunday at Les Invalides, where his body lay in state on the eve of the memorial service.

"He was a great man who had an absolute fantastic class in all circumstances," said Nadine Prevost, who was among the Saint-Sulpice mourners. "He knew how to speak to everyone with a simplicity and a grandeur. And that's what made for the richness of his contact."