MILWAUKEE -- Is Hank the Ballpark Pup...an imposter? That's the claim being made by a blogger at "BrewCrewBall.com" -- a Milwaukee Brewers baseball community, and others on social media.

According to the Brewers, Hank’s story started when he first appeared at "Spring Training" on February 17th, 2014, the day of the first workout for Brewers pitchers and catchers. That morning, he wandered up to staff at the Brewers Maryvale facility after clearly being a homeless stray for an extended period of time.

Hank’s 2014 culminated in Los Angeles as he was named “Dog of the Year” in January 2015 at the nationally-televised World Dog Awards.

The blog post at BrewCrewBall.com suggests the roots of the rumor that Hank the Ballpark Pup is an imposter go back to a tweet posted by Twitter user @akschaaf in December 2015.

In the blog post are a series of photos that compare the "original Hank" to the "replacement Hank."

This blog post -- and others on social media, claim "original Hank" and "replacement Hank" are two different dogs.

The blog post claims the "real" Hank the Ballpark pup died on June 30th, 2014 -- leading to the Brewers' subsequent collapse on the field. 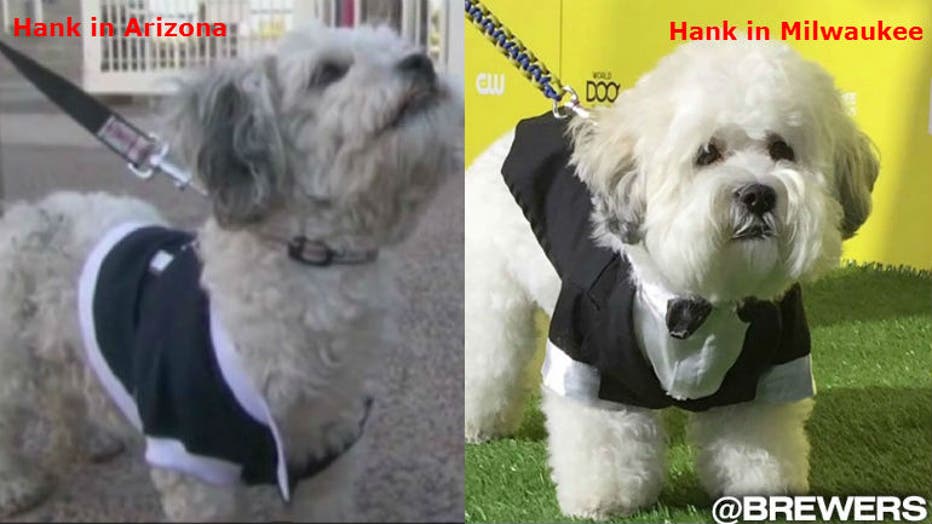 What do you think? Is Hank the Ballpark Pup an imposter?

Adam McCalvy, a beat writer for the Brewers, said this on Twitter on Tuesday:

Tyler Barnes, the vice president of communications for the Brewers responded to the rumors in an article at MLB.com entitled: "Attention world: There's only one Hank the Dog and he's just fine."